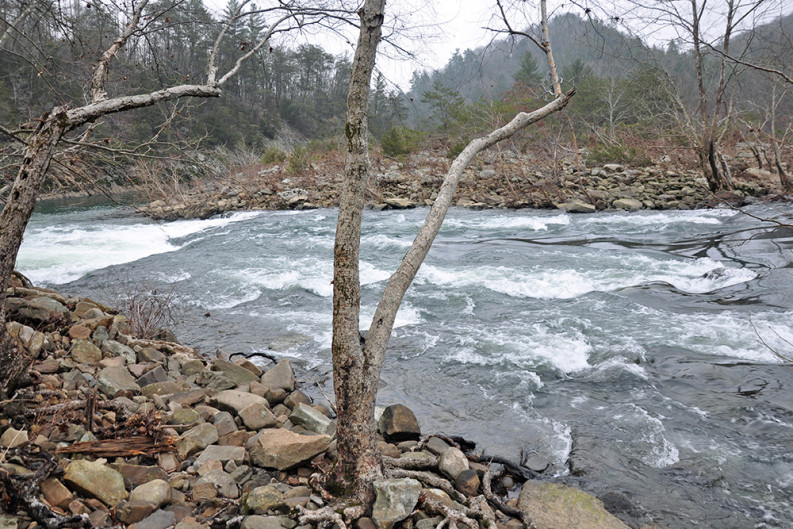 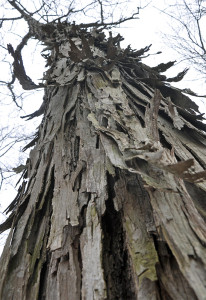 Why anyone would consider camping in the middle of January is beyond me, but it was something I’d never done, so one Friday afternoon I began to consider it. I probably would have talked myself out of it by Saturday morning, but I made the mistake of texting my colleague Drew Crain, who teaches biology at Maryville College. Almost immediately, he agreed to go, and I was committed.

Was I prepared? I had a tent, a pad, a tarp, and a White Stag sleeping bag inherited from my father, who probably had purchased it in the 1950s. Crain borrowed a sleeping bag from his friend with a “rating,” he said, of 25 degrees, almost exactly the forecasted low for my winter camping debut. The White Stag label had no temperature rating but said “superior warmth,” which seemed to me (at the time) a better estimation of quality than an arbitrary number. I had a military surplus parka that had kept me warm on hikes in single-digit temperatures. Finally, Crain loaded what seemed to me an adequate amount of oak into the back of my Subaru. Would we be warm? We thought so.

I picked the destination, Rock Creek Campground, on the Emory River, near its confluence with the Obed. We planned on fishing the Emory and hiking on the Cumberland Tail, a work in progress that, when finished, will run along the plateau from Signal Mountain near Chattanooga to Cumberland Gap in Kentucky.

I had not seen The Revenant before our camping trip, and I am glad. In it, Crain said, is the most realistically depicted bear attack he’d ever seen in a movie. Leonardo DiCaprio’s character, based upon early 19th century trapper and guide Hugh Glass, comes between two grizzly cubs and their mama and suffers what seems an interminable mauling, hyper-realistic and gruesome in its detail. I highly recommend the movie but not before camping.

Crain did not think our dinner of bacon and homemade bread with rosemary would lure bears from the rugged wilderness of the Obed Wild and Scenic River area. Black bears in this area don’t exactly hibernate, he said, but they tend to stay put in their dens when it gets below freezing. “If it was in the 50s, I might not cook bacon,” he said.

Somewhat ominously, the campground not only had those metal bear-proof trash receptacles, but also metal storage compartments for food and cooking implements. And despite his convincing reassurances about slumbering inactive bears, I found out that Crain, like me, had brought along bear repellent.

Wildlife biologist Jay Clark, who has done extensive research on bears, told me later that it was unlikely we’d see a bear on our trip for two reasons: their inactivity in the winter and the scarcity of humans who don’t clean up and store food properly after cooking, something that Crain and I would be certain to do. 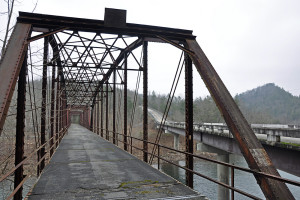 We fished hard from mid-afternoon to near dark. In spite of getting no bites, it was fun to scramble along the rocky banks of the Emory and cast into the deep pools outside the rapids. The river had a green tint to it and it flowed under two bridges, one of them Nemo Bridge (Catoosa Road), the other a beautiful iron-truss bridge, built in 1929, that has been preserved as a pedestrian crossing between the campground and Nemo Landing, a picnic area.

Just before dark, four kayakers emerged from the river at Nemo, exhilarated after from their run from Lily Bridge, a few miles upriver on the Obed. One of them had taken an unplanned swim at some point. Suddenly, winter camping didn’t seem all that edgy; neither of us could imagine being on or in this water, drysuit or not.

This wasn’t exactly the Rocky Mountain wilderness that Hugh Glass had to crawl and limp across after the bear mauling. We parked right next to the campsite within sight of Catoosa Road, and there was a concrete picnic table, a fire ring, and a pit toilet, thanks to the National Park Service. There were, however, no other campers.

We got the fire blazing before dark and Crain fried the bacon in a cast-iron skillet that he lay on the fire. Remembering the campfires of his younger days, Crain was able to recite from the label of some strong spirits someone always brought along: “Yukon Jack is a taste born of hoary nights, when lonely men struggled to keep their fires lit and cabins warm.”

It was a hoary night indeed. The wood ran out about 10:30 p.m., and having already scavenged neighboring campsites for derelict logs and having resorted to collecting twigs in the dark, we retired to our tents to test out how well outfitted we were for the conditions.

Crain was snoring within seconds, and he kept snoring while I lay awake and listened to the river roar a few yards below us and then the whistle of a train every couple of hours, the wrack-wracking of the iron wheels hauling freight between Cincinnati and Chattanooga. For a while, it was lovely, and I felt privileged and grateful to be there.

After an hour or two, though, dwelling on our solitude and isolation, I couldn’t stop thinking of the bear movies I’d seen; all of them seemed to be set in the winter. In The Edge, with Anthony Hopkins and Alec Baldwin, a bear surprises three men at their campsite and stalks them for a few days (would not happen, said Clark).

It would be difficult to hear one approach us with all the noise: the damn river, the annoying train, and Crain’s snoring. How was he sleeping? As is my habit when unable to sleep, I began an inventory of worries and grievances. I let it roll on like a badly made documentary I could not turn off, the sleeping bag pulled over my head, fur-lined parka piled on top of that.

Finally, I got warm enough in the White Stag to drop off and dream of malevolent park rangers who began to string up a barbed wire fence between our campsite and the river for some reason they refused to explain. 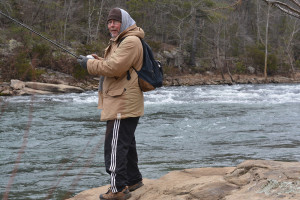 The next morning, we hiked a ways up the river along a white sand beach on the Nemo Landing side. Even with the railroad track at the top of the gorge somewhere and the highway less than a mile downriver, it seemed like wilderness, the river crashing by on one side, the dark wall of the gorge rising from a beach punctuated with jagged boulders and briars.

I fished a little, mostly to stay warm. Fortunately, we weren’t dependent on our fishing skills for survival. At one point in The Revenant, DiCaprio’s character snatches up a small fish from a makeshift dam and devours it raw (Oscar worthy!). For me, it was a matter of reeling in my line, loading the gear, and driving the hour and half back to Maryville to concoct a hearty macaroni and cheese casserole.

Still, the winter camping experiment was well worth it, much better than sitting at home watching football, though the next time we’ll need more wood, a 21st century sleeping bag for me, and better research on the fishing there.