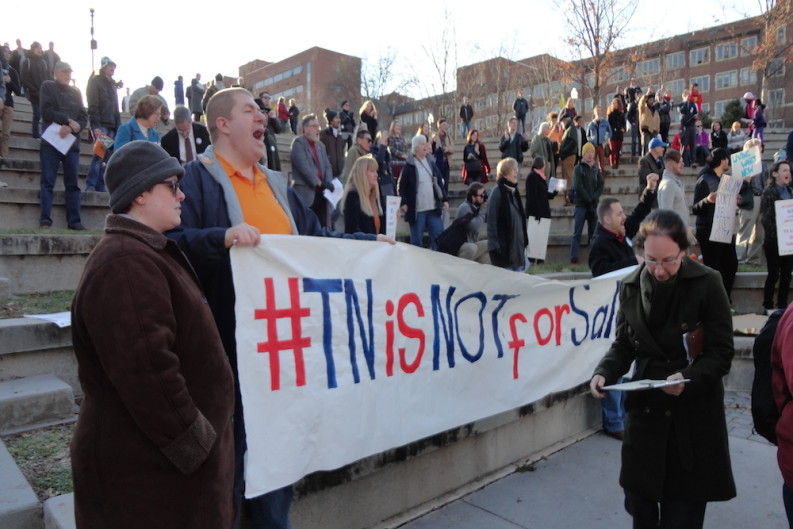 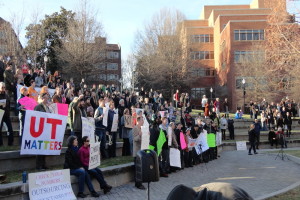 “Your University is Under Attack Rally,” Feb. 5, 2016, at the University of Tennessee campus.

More than 200 people rallied at the University of Tennessee on Friday afternoon to protest what they say is an increasing and worrying set of bills by the state Legislature targeting the campus.

The “Your University is Under Attack” rally brought together a wide array of students, faculty, and staff concerned over what they say are frightening and unwarranted overreaches by the General Assembly into decisions better left to the UT, such as funding for diversity programs, privatization of campus workers, and limits on academic freedom.

In addition to a pair of bills that would either strip or dramatically cut funds for diversity, minority, and sustainability programs at UT, organizers are concerned about measures that would dismantle and replace the UT Board of Trustees with political appointees, a bill to allow guns on college campuses, and the ongoing controversy over out-sourcing all non-essential state employees.

“Our entire university is under attack,” Barron says.

UCW organized the rally, which included members of the UT Faculty Senate, the American Association for University Professors, the Progressive Student Alliance, and the UT Diversity Matters coalition.

The student coalition was formed this year for activists to organize for their minority and marginalized peers and to fight a set of bills introduced in the General Assembly that would slash or completely end all funding for diversity and minority programs on the campus.

The most serious bill introduced this session is HB 2559, which would replace UT’s governing body, the Board of Trustees, with a board stacked by appointments from the General Assembly, taking away the institution’s autonomy and opening the door for political interference, says Bruce MacLennan, UT Faculty Senate president.

Preston Jacobsen, sustainability manager for UT, says he doesn’t know why his office was targeted for budget cuts. However, he spoke at the rally to support all aspects of campus and educate people on the economic benefits of being environmentally conscious.

“We’re here for an open dialogue,” Jacobsen says. “Sustainability kind of flirts with that more progressive nature of thought, but that’s not our case here. We are here to manage our energy consumption, reduce our waste streams, reduce our water consumption.”

Faculty members have been warned by the UT administration to avoid being overly critical of the state Legislature, and were told that such actions could result in retaliatory budget cuts, says Mary McAlpin, professor of modern foreign languages and president of the UT AAUP chapter.

“We have been told by administrators that while they (the General Assembly) have no direct power over any particular item on the budget, they could if they wanted, cut our budget as a punitive measure,” McAlpin says.

While she says these and other bills have little chance of becoming law under education-minded Gov. Bill Haslam, McAlpin says the introduction of such bills could potentially have a chilling effect on the faculty, driving away quality faculty and students to other institutions.

“It’s going to drive away faculty,” she says, “Drive away good faculty, drive away good students, it’s not getting us to the top 25 by any means. And even if the students stay through their undergraduate degrees, they’re going to leave Tennessee when this is over.”

Trey Johnson, a student in ecology and evolutionary biology, says it is reasonable for minority students concerned about a hostile climate and potential cut to diversity programming to consider transferring schools.

“The students that are among the diverse populations are very, very concerned,” Johnson says. “There’s definitely tension on campus about all of this.” 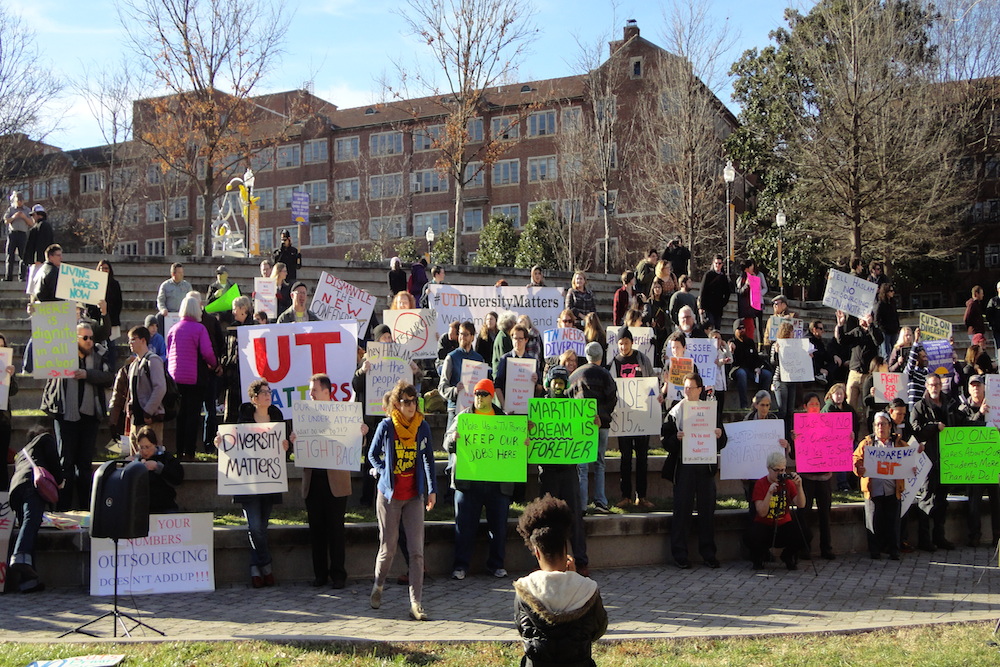 “Your University is Under Attack Rally,” Feb. 5, 2016, at the University of Tennessee campus.