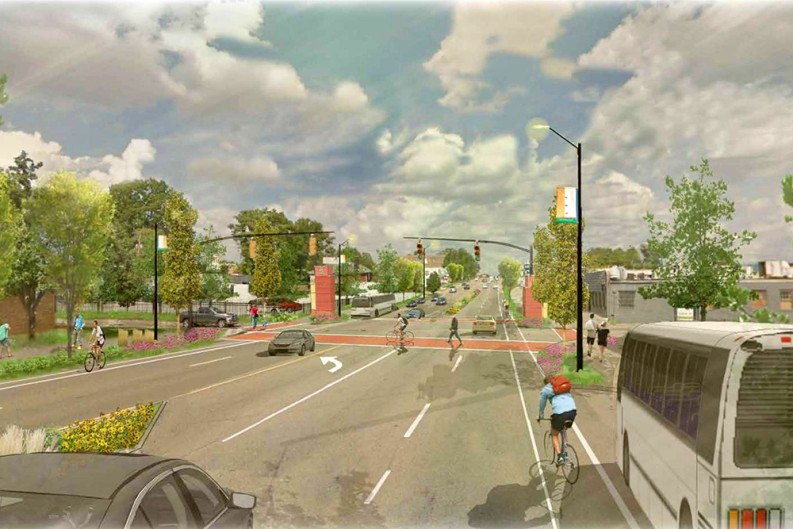 Around 35 East Knoxville residents and activists protested against the city of Knoxville’s streetscaping plan for Magnolia Avenue on Tuesday, turning an otherwise mundane City Council meeting into a display of anger and frustration at what they say is an effort to push them out of their neighborhoods.

“We don’t want Magnolia to be another Old City,” one grade-school-age boy yelled from a megaphone to a round of applause at a rally outside the City County Building.

The Council meeting did not start until 7 p.m., but protestors started arriving at 6 p.m. outside the City County Building with large signs that read, ‘Black Lives Matter,’ ‘Whose East Knoxville,’ and ‘Revitalization = Whitewash.’ And while the streetscaping plan was not actually on the City Council’s agenda that night, protestors repeatedly brought it up in the open-forum session.

The city of Knoxville’s Magnolia Avenue Streetscapes Project would improve the physical infrastructure along the corridor with raised medians, new pull-offs for buses, and add bike lanes, all in an effort to make the area more attractive for new businesses, says Eric Vreeland, communications manager for the city of Knoxville.

“The aim is to create an environment that’s attractive to entrepreneurs, which would attract new investment,” Vreeland says. “This is simply creating the aesthetics that makes people want to invest money and build new businesses there.”

However, the plan is being met with resistance from some in the neighborhood who claim that the city’s project takes the wrong approach to improving the community. The residents and activists at the meeting say that it would gradually make the Magnolia Avenue area too expensive for them to afford, and fear that encouraging outside investment would eventually push out existing businesses.

Magnolia Avenue residents rejected the plan when it was first proposed in 2009, and the city has not taken into account residents’ negative feedback, says Rachel Wanyoike, a massage therapist who spoke against the plan at Tuesday’s open forum.

“I am all for improvements. I think that more streetlights is great,” she says. “But to me it doesn’t mean, ‘let’s invest in the people who are trying already to make this a good place.”

Wanyoike and others resist the concept of attracting outside businesses, saying they would prefer community programs and loans for existing companies. (It’s worth noting that the Knoxville Area Urban League is a certified Community Development Financial Institution, providing loans from $5,000 to $250,000, partially funded by the city.)

“[The money] could be earmarked for grants for small business startups,” she says, “There’s plenty of small, black-owned business on that side of town.”

The Magnolia Avenue Streetscapes Project has been under development for years and arose out of community input from people saying how they want to see the area improve, Vreeland says.

“The goal of the redevelopment project is to encourage investment, to encourage new economic activity for the benefit of the community,” says Jesse Fox Mayshark, communications director for the city of Knoxville. “It’s not to in any way displace anybody or favor one kind of development over another.”

While public opinion is always important in assessing public projects, concerns about the impact of this proposal are just as relevant as the opinions of residents who support the revitalization, Mayshark says.

“The fact that those concerns are raised by them doesn’t devalue the support and points of view of the many other people that have been engaged in this all along,” he says.

While the city maintains the project is meant only to enhance and beautify the corridor, many residents point to architectural drawings of the finished project and its future pedestrians—only one of which is a person of color in the long-time black neighborhood.

“The city itself is saying, ‘Hey, this is our vision of what the east side will be,’” Wanyoike says. “‘It will be all white, it will be outside funding, outside businesses, outside development.’”

This round of opposition comes at the end of a years-long planning process and approval by the Metropolitan Planning Commission, Knoxville’s Community Development Corporation, and Knoxville’s City Council. (Wanyoike says community concerns were voiced in ’09, but Vreeland says these concerns appear to be new.)

With the public comment period ending Friday, final approval of the plan is now up to Mayor Madeline Rogero, who will decide whether to include the project in her budget for the next fiscal year. 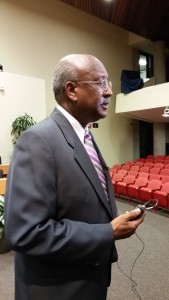 Amelia Parker, a Knoxville resident (who does not live on Magnolia Avenue), says if the city cares about improving her neighborhood they would invest in the community itself. Parker says Tribe One, an after-school program that closed down in 2013 due to a lack of money, could have been saved for $3 million—one-fourth of the total $12 million cost of the improvements proposed—and done more to address issues like crime.

“What we’re calling for is a redevelopment process that actually listens to the people that bring ideas and their concerns, what their priorities are for their community,” Parker says.

Knoxville City Council member Daniel Brown, whose district includes much of Magnolia Avenue, says he supports the plan’s goals, but would vote to postpone or change the project.

“I think we should look at [the project] again,” he says.

But it’s unclear whether such a postponement would even be possible, and he added he has but one vote. Brown suggested he may push the city to further review the plan after seeing the reactions from Tuesday’s meeting and similar resistance at another meeting about the project at the John T. O’Connor Senior Center in January.

“I support the upgrade to the area, and hopefully private investment, which could also include minority businesses while also being sensitive to concerns of citizens,” he says.

Update Feb. 10, 2016: Added a quote to clarify the point that although Brown wants to take another look at the streetscape plan, he does support it.