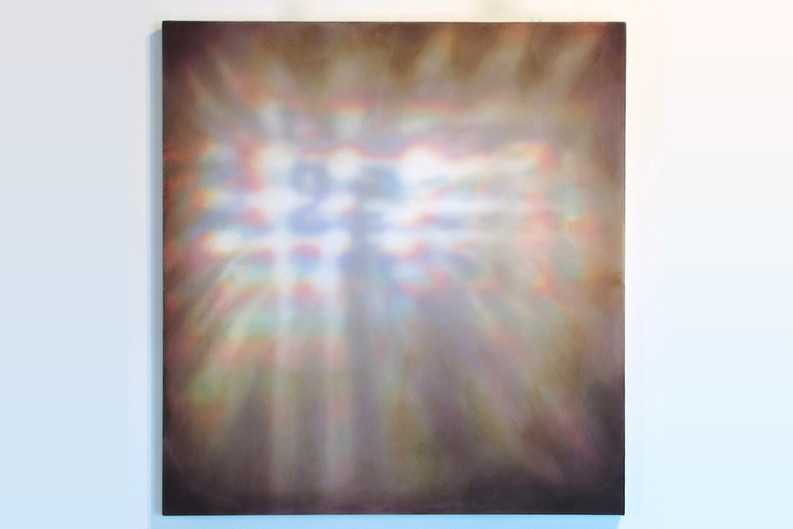 When I look at one of Heather Hartman’s paintings, I think of sun filtering through summer-green leaves, or rippling through the eddies of a stream. Hartman thinks of them as landscapes, although none of them show land—or leaves, for that matter. Or a stream.

They are paintings of light, evocative “mental landscapes” that seek to take the viewer to the edge of recognizing something that is just out of focus. Her novel painting method makes the works appear to glow with wobbles of color, both obvious and almost invisible.

Hartman invented a two-layer painting process that starts with a drawing or painting on paper, usually a graphic image in black and white or strong colors. Over this is placed a top layer painted on polyester mesh—the fabric used in silk-screening—that is first treated with a gesso paint mixture to make it translucent. She uses unusual water-soluble oil paints in very thin glazes for the top layer.

Hartman removes the fabric at least three times to alternate working on the bottom and top paintings, seeing how the two interplay. The slightly separated images meld in the viewer’s eye, so it’s hard to tell which is on the closer surface.

“Typically I’m looking for the painting to do something unexpected,” Hartman says.

She says she tries to draw attention to the fact that there is always a filter between us and what our eyes perceive, whether that filter is a pane of glass or the moisture in the air itself.

“I like to make people more aware of how they see. … Seeing something immediate and brief, yet sublime—mundane meditations,” Hartman says.

It took Hartman years, however, to achieve the effect she was seeking. First she tried different methods of painting on wood. Eventually she tried wrapping silk-screen material around a wood panel, then carving parts of the panel for the silkscreen to sit on, and finally stretching the material itself over paper.

An adjunct art professor for Carson-Newman University, Walters State Community College, and Roane State Community College, Hartman is a Los Angeles native who grew up mostly in Nashville. While she was earning her master’s degree in art at the University of Tennessee, her professors encouraged her to simplify her work to its essence, which is when she began painting light. After grad school, she moved to Lancaster, Pa., for less than a year, but found that the light was wrong.

“I’ve always lived in valleys that had a lot of pollution, which makes colors in the sky very vivid,” she says. “The colors and light just weren’t the same.”

So she returned to Knoxville, where she creates her work in the Vacuum Shop Studios on North Broadway. It’s a small space that just barely fits an easel and a rolling cart, which is packed with cans of spray paint and brushes. She often works on paintings directly on the wall, wheeling the cart to the right spot across an uneven floor of damaged concrete and crumbling black-and-white tile. The sound of laughter and music pulse through the wall from K Brew next door. A finished painting on one wall reflects dappled shadows in pastel hues, with what appear to be drops of rain or condensation in the foreground, as if viewed through a window.

Above a countertop on the back wall, Hartman has taped up some of the photographs she uses as inspiration for the paintings. Usually these are no more representational than the final product: rainbows refracted through a window onto a textured surface, the reflection of a sunset in water, a streak of distant lightning. The paintings aren’t named after these “subjects,” however. Hartman prefers ambiguous names that could be a noun or a verb, like “Drip” and “Surface,” encouraging the viewer to an independent interpretation.

Her snapshots (which she emphasizes are not art) are reminiscent of the one or two “mistake” photos that used to get printed out with every roll of film a dad shot in the days before digital cameras. (Hartman says sometimes when she takes her photos to be developed at a drugstore photo center, the employees think the pictures haven’t developed properly.)

Hartman currently has a solo show at the Channel to Channel contemporary art gallery in Nashville. But Knoxvillians can get a closer look at her work starting Feb. 12, when she and artist Jessica Payne will have an opening at the Tennessee Valley Unitarian Universalist Church. The exhibit will run until March 30.

Heather Hartman’s joint exhibit with Jessica Payne will be on display at Tennessee Valley Unitarian Universalist Church (2931 Kingston Pike) from Feb. 12-March 30. An opening reception and artist talk will be held on Friday, Feb. 5, from 6-7:30 p.m. Admission is free.