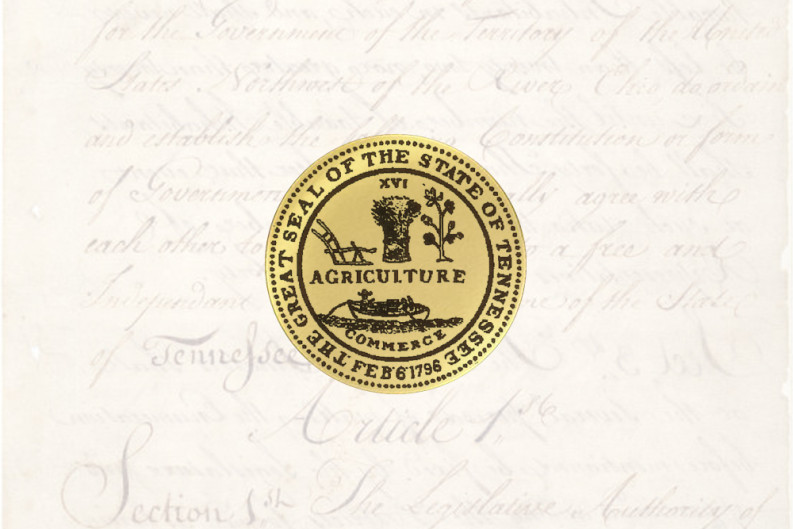 The State Constitutional Convention was completed in downtown Knoxville, 220 years ago this Saturday.

Feb. 6, 1796 was once considered Tennessee’s birthdate. It was the final day of the Constitutional Convention, a month-long meeting in downtown Knoxville. At that convention, 55 delegates from across the Southwestern Territory gathered here to draw up the new state’s first Constitution, including the basic laws that would govern the new American settlements from the Appalachians to the Mississippi River.

The main convention was held in the office of Col. David Henley, who was an agent from the George Washington administration, at the southwest corner of Gay Street and Church Avenue. That corner was once honored as the Birthplace of Tennessee.

It was one of the most esteemed gatherings in Knoxville history. The territory was divided into only 11 counties, and each county sent five delegates to the convention. Some were from nearby Virginia or North Carolina, but several of Tennessee’s leading founders were originally from Pennsylvania. A few delegates were immigrants from Ireland, including Knox County’s John Adair.

Among the attendees were James Robertson, founder of Nashville, and future president Andrew Jackson, both representing fast-growing Davidson County. According to an old unproven tradition, it was Jackson who suggested the Cherokee word “Tennessee” for the new state.

The youngest delegate–he may have been no older than 20–was William C.C. Claiborne, who later became the first English-speaking governor of Louisiana. Claiborne County, Tenn. is named for him, but so is Claiborne County, Miss.; Claiborne Parish, La.; and Claiborne Avenue, the longest street in New Orleans.

Among the delegates were several future governors and U.S. senators. Several delegates were so prominent in Tennessee history that they have counties named for them. They included John McNairy, Joseph McMinn, William Cocke, Joseph Anderson, Archibald Roane, John Rhea, and Landon Carter.

Unlike some constitutions, like that of North Carolina, it did not demand that office holders be Protestant Christians. “No preference shall ever be given by law to any religious establishments or modes of worship… No religious test shall ever be requied as a qualification to any office or public trust under this State.”

However, it added that “No person who denies the being of god, or a future state of rewards and punishments, shall hold any office in the civil department of the State.”

The Knoxville constitution did not differentiate between the rights of blacks and whites, and permitted free black mento vote and to bear arms. Most blacks in Tennessee during that era were slaves, but free black men voted during Tennessee’s first 38 years as a state. However, a second constitution written in Nashville in 1834 restricted blacks’ right to vote–and guaranteed the right to bear arms only for whites.

The constitution was broad-reaching in some respects. Although the mouth of the Mississippi River was controlled by King Charles IV of Spain, and would soon be controlled by Napoleon’s France, the delegates gathered in Knoxville–400 miles away from the river–declared that “the free navigation of the Mississippi is one of the inherent rights of the citizens of this State; it cannot, therefore, be conceded to any prince, potentate, power, person or persons whatever.”

Thomas Jefferson reportedly remarked that it was “the least imperfect and most republican” of the 16 state constitutions up to that time.

A celebration of the 220th anniversary of the signing will be held at Blount Mansion this Saturday, Feb. 6, at 2 p.m., with Jack Rentfro and his band reading parts of the original constitution to improvisational musical accompaniment.