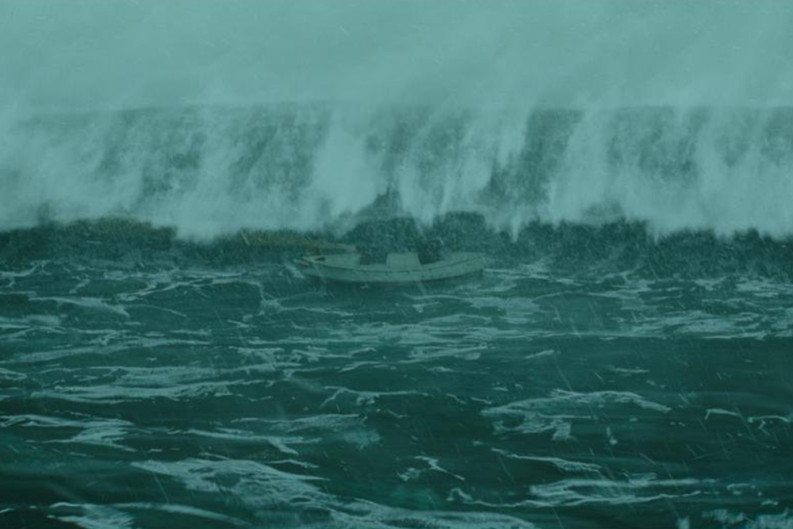 If you get the feeling that Disney’s The Finest Hours is the sort of movie where plucky women scan the horizon for their seafaring beaus and men say things like “not on my watch,” you’re spot on. Disney’s extravagantly budgeted dramatization of a daring 1952 Coast Guard rescue is as old-fashioned as they come, full of stoic, square-jawed guys who persevere in the face of unthinkable odds because, well, that’s what stoic, square-jawed guys do. Sure, it’s hokey and predictable. But it’s executed so skillfully, from its winning casting to its exceptional visual and sound effects, that it lands in a sweet spot between nostalgic throwback and high-tech blockbuster.

In the case of its two unlikely heroes, the squareness extends beyond their mandibles, and they’re all the more endearing for it.

First there’s Bernie Webber (Chris Pine), a mild-mannered Coast Guard coxswain who accidentally made history in February 1952 when he led a four-man crew in a maritime rescue that fell just shy of impossible. When we first meet Bernie, he’s worked himself into a fit of nervousness over the prospect of his first face-to-face meeting with Miriam (Holliday Grainger), a switchboard operator he’s been chatting up on the telephone. She likes him just fine, of course, and in a few months she proposes—the movie lobs us a little curve every now and then—and Bernie eventually accepts.

The Finest Hours spends a surprisingly long time on their courtship, which might be unwelcome if it weren’t handled so charmingly by director Craig Gillespie (Lars and the Real Girl). Pine plays against type, ditching his usual frat-guy swagger in favor of stammers, awkward pauses, and a chin that seems magnetically attracted to his chest.

But even as the first act dotes on ’50s small-town dating rituals, we know what’s coming: A brutal nor’easter is bearing down on Bernie’s hometown of Chatham, Mass., and it seems to have a personal beef with oil tankers. In short order it snaps two of them in half, leaving 32 men stranded in the engine room of the SS Pendleton. Their greatest asset is ship engineer Ray Sybert (Casey Affleck, who steals the movie from Pine), a surly introvert who’s bad with people but exceptionally good with machines.

The movie settles into a comfortable rhythm as it cuts between Webber’s insane rescue plan—to steer a 36-foot wooden boat through a storm that has already chewed up a pair of oil tankers—and Sybert’s efforts to keep the sinking tanker afloat long enough for someone to miraculously find them.

It may be a Disney movie through and through, but that’s not to say The Finest Hours doesn’t offer some truly unsettling thrills. From its first moments on screen, the Pendleton is the stuff of nightmares. The ship’s captain is dead before he can even make an appearance, leaving us to spend most of our time with Sybert in the cavernous engine room, where he reads the storm through the monstrous groaning of the ship’s seams and welds.

As Sybert tangles with the storm from the grimy bowels of the tanker, Webber attacks it from the surface, driving his tiny boat and even tinier crew through the enormous waves and deadly, gale-force winds. The unnecessary 3D conversion dims the film enough to render some of the nighttime scenes murky and confusing, but the daylight stuff is stunning and even frightening. There’s never any real doubt about the outcome of Webber’s rescue mission, so it’s saying a lot that The Finest Hours still conjures so much tension during its grueling action sequences.

Cynics will sprain their eyeballs at some of the movie’s schmaltzier components, but that’s an acceptable casualty for a film that’s so committed to recreating the squeaky-clean, can-do positivity of a certain type of classic Hollywood adventure. It’s also an underestimation of the movie’s coolest aspect: It’s a big-budget disaster flick about two dorky introverts who’d probably lose their nipples to frostbite if they even thought about baring their chests. In other words, it’s an action movie without action heroes, focusing instead on blue-collar joes who, in the end, are just trying to get through a day on the job. υ