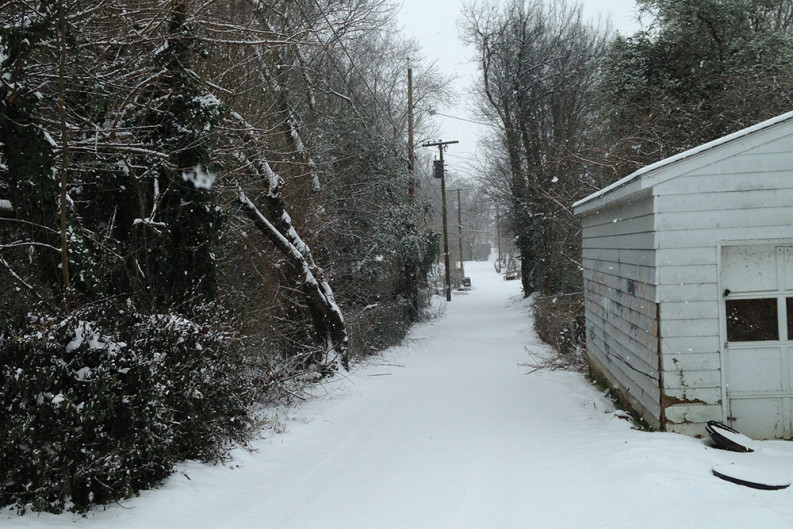 Fresh snow lays bare the secret wanderings of the wild urban animals that live among us. Taking out the trash during our last snowfall, I spotted rabbit tracks in the clean, undisturbed snow in the alley. A few minutes before, I had dumped the compost in the bin beside the trash can, and I saw no rabbit then. She must have dodged around a corner as I approached. She must have sat so still I passed by unaware.

The rabbit had loped down the entire block, I saw. The tracks ran past the backyard with the always-barking dogs, got lost in the lee of the shed where no snow had fallen, and picked back up at the corner, before disappearing for good into the stormwater culvert. It was a strange picture, the wholesome country rabbit living in the city sewer.

I wonder what-all wild animals are using the culverts and sewers as underground highways. I’ve seen raccoons slink head-first into the small sewer drain at the curb, like the Foot Clan ninjas do in the first Teenage Mutant Ninja Turtles movie, a scene that caught my imagination as a kid and that I always wanted to try.

During the height of my own kids’ Ninja Turtles phase, they pushed letters and birthday party invitations down the sewer grate at the corner of our yard, addressed to Leo, Donny, Mikey, and Raff. Ninja Turtles live in the sewer, you know, with their rat sensei: wise, kind Master Splinter, who got the most fan mail. He got so much mail, the slots of the sewer-grate mailbox were crammed full. Some notes drifted into the street for passers-by to pick up.

One day, my kids found gifts left by the Ninja Turtles, or, their own Parkridge Boo Radley: a Turtles-themed beach ball, and a sprig of azalea. On another day, they found hanging below the sewer grate an Eastern spiritual decoration made of wood and rope that they used as nunchucks.

Another time they brought me a “vet thing” they found in the ditch next to the grate, a hypodermic needle and syringe, full of muddy rainwater.

Here’s a thing that fascinates me: the proximity of disparate worlds. The bubbles that rarely burst. The crust of asphalt between my feet and the subterranean world of wild animals is thin. An old street needle is held by a child who remembers the time her cat got a vaccine at the vet’s office. A token from a world of craving and loss made its way into a world of innocence and trust. It’s a clue. Still, the bubble didn’t burst. Things slip through the rainbow soap and the walls bounce back unscarred.

What a lot of effort it takes for signs and portents to sink in. The last summer of my marriage, I happened upon both a four-leaf clover and a snake nearly every day. They were visitations of sorts, small mascots of a personal apocalypse. My dreaming eyes tried all summer to zero in on some slippery something that was not right, and focused instead on primal, symbolic shapes in the grass: leaves arranged in a lovely crisp pinwheel, and a lunging white-bellied streak. Some people have never found a four-leaf clover and don’t encounter snakes that often, but I know they can always be found right there at the edge of the sidewalk. When one wanders around myopically staring at the fascinating ground, all is invisible but four-leaf clovers and small snakes saying, “You are charmed. Beware.”

We humans have the forward-facing eyes of chasers, not prey. We don’t see the ambush coming.

With gloved hands, the children turn over the Snake Rock, a flat piece of marble under which they can often find a tiny brown snake coiled. Not today. The snow has driven the snakes farther underground.

More wild animals live in this densely populated inner-city neighborhood than I expected, navigating the in-between spaces of city life. And I know I also live in a little patch of weeds that is my whole world.