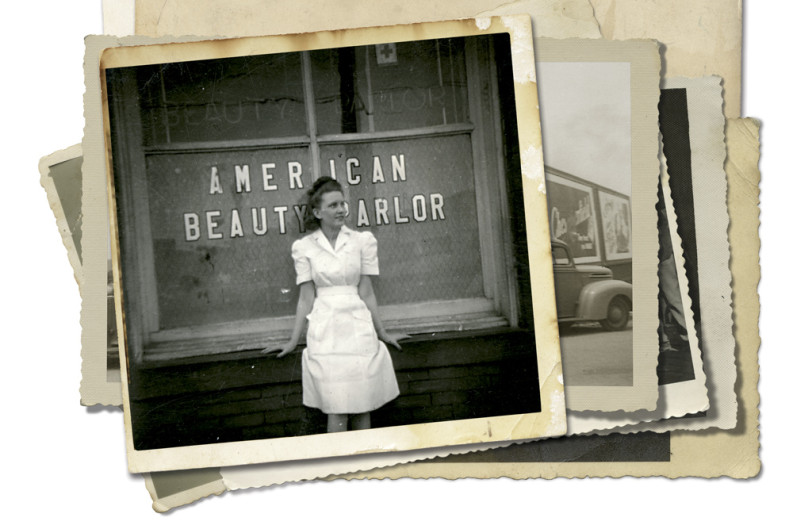 She stands in front of the American Beauty Parlor like a blue-collar Mona Lisa, wearing a crisp white uniform that looks more appropriate for a wartime nurse than a small-town beautician. Her gaze is drawn away from the camera just as her smile begins to rise, as if the shutter was tripped at the very same moment someone had arrived to distract her. Was it a boyfriend? Her parents? Was this her first day on the job—or was this her very own salon?

Why was this particular moment at a local storefront being memorialized?

We may never know.

But it’s just the sort of photograph that reveals a more intimate side to history—one that is starting to gain value among both historians and collectors of ephemera.

When we view historical images, it is traditionally through the lens of someone who was consciously trying to record history: the war correspondent, the news photographer, the portrait artist, or even the paparazzi. “Vernacular photographs,” on the other hand, are shot by amateurs rather than artful professionals—they’re family snapshots, studio portraits, street photos. Most of them were meant to be seen by just a small group of people: friends and family. Eventually, they were stored away in boxes and closets, saved over the decades for sentimental reasons, until they were ultimately abandoned to the trash collector. After all, why would anyone want someone else’s family photos?

“For one thing, I think they’re beautiful,” says Bradley Reeves of the Tennessee Archive of Moving Image and Sound, a small department of the Knox County Public Library’s Calvin M. McClung Historical Collection tasked with collecting the Knoxville area’s cultural history via film, vinyl, and tape. “There’s a story in every picture, whether you can imagine it or if it’s clear from the content of the picture. There’s something there.”

Over the past year, Reeves and fellow audio-visual archivist Eric Dawson (also a Knoxville Mercury columnist) have become increasingly intrigued by that “something.” While TAMIS’ warren of climate-controlled archives in the basement of the East Tennessee History Center contains a sizable collection of local music recordings, radio and TV broadcasts, and historical photos and films, there’s a new (and growing) subset of vernacular photographs. They document a side to Knoxville that previously would have been lost and forgotten: the small details of daily life, generations ago.

“I think this is the unofficial record of history,” Dawson says of the growing interest in saving and sharing vernacular photos. “It’s not mediated through any sort of corporate interest or network or magazine. It’s just people sharing all this stuff without an editor or filter, so it gives a sense of how people might have lived.”

The photograph of the American Beauty Parlor is filed in a folder named the “Dan Cooley Collection.” Reeves and Dawson are not even sure who Dan Cooley was—but it was at his estate sale in Harriman that they acquired it last year, along with several other evocative shots that remain mysteriously disparate: a 1920s roadhouse, identically dressed girls attentively studying an early television set, some men in their underwear (and one in a bra) mock fighting on the front lawn.

“They’re the most fascinating pictures,” Reeves says with an enthusiasm he usually reserves for a newly discovered cache of jazz shellacs. “There were hundreds, if not a thousand, of them just shoved in boxes. They were selling off everything. So we grabbed the most interesting ones that we could find. Most of our things are related to music and television, but it’s hard to leave these behind to go to the trash.”

Along with personal donations, estate sales have become a significant source of items for the TAMIS collection. Reeves and Dawson scan Craigslist each week, looking for the code words that might translate into rich strikes of local history: 78s, old photos, reel-to-reel tapes. When they arrive at a sale, they do a quick triage, looking for recordings of local musicians or broadcasters, anything that might fill in the gaps of Knoxville’s cultural history. Their mission is to assess what they can afford to purchase, and to do so quickly, before other collectors acquire the items.

But amid the rare 45s by local record labels and radio transcription discs, they kept noticing compelling photos of things outside of their usual purview. And they could not resist them.

“I’m attracted to a certain style of photo—there has to be something unusual about it, some mystery to it, something a little bit odd that really draws you in,” Reeves says. “We have to be selective here, especially if we buy these things at 50 cents or a dollar apiece, because it quickly adds up. But if we don’t look out for them, I think they’re going to go in the trash—we’re like the last stopping place for a lot of these photos at estate sales.”

While some estate-sale photo collections may offer seemingly unrelated subjects, such as the Dan Cooley Collection, others contain the history of a family’s existence—adding a measure of poignancy to TAMIS’ search-and-rescue missions.

“That’s what’s amazing to me: You’ll come to these estate sales, and either the family has died off—like this is it, the trail has ended for these folks—or the kids have moved away and they don’t want to deal with it, just sell everything in the house,” Reeves says. “So generations of family photographs, they’re right there for anybody.

“A lot times when you buy large collections or stumble across them, you’ll see a family develop over the years. You’ll watch them progress—watch new folks being added, old folks going away. It’s kind of fascinating, a story within itself.”

But TAMIS’ days of being a “last stop” for such photos may be waning—they have growing competition. Reeves and Dawson say they are noticing more and more collectors and resellers at estate sales. While vernacular photos have long been recognized in the art world as worthy of gallery shows and scholarly essays, they have more recently become a commodity in auctions. They’re being sold at traditional outlets (Swann Auction Galleries in New York City, for instance, touts a long list of vernacular auctions, including the works of a nudist couple in New Jersey that went for $13,740 in 2014) as well as on eBay (a recent search for “vernacular photos” returns 235 results, ranging in price from $2.20 to $300 for a photo of two women clowning it up on the beach). Meanwhile, blogs like Shorpy or Tattered and Lost have popularized the concept of collecting and sharing vernacular photos online; so have groups on Flickr and Facebook.

“I think a lot of folks like them because they represent a time gone by,” Reeves says. “You see a lot of these pictures and the hairstyles, the clothes, the cars, the attitudes—all of it is like a mirror into a different world that’s long past.”

There can also be reminders of our commonalities over the generations—a comforting sense that life’s essentials are perhaps not as different as our lifestyles have become. For Reeves, when he sees a photo of ma and pa posing in front of their house, he sees his own family: “It reminds me of my great-grandparents in Edwardsville, Ala.—how the house was always dark, the black-and-white TV, the smell of coal and fried eggs and bacon. It reminds me of that world, which is mostly gone. You get a sense of how people lived, what they were like, and the mood of a place.”

Today, of course, most everyone is a smartphone-equipped documentarian of our age. But that wealth of data is mostly locked away on personal hard drives or in proprietary server clouds. While trawling publicly accessible Facebook accounts may be one option for forward-thinking archivists, it lacks context—we don’t yet know what sort of images we’ll value in the future. Meanwhile, the likelihood of being able to sift through and collect physical photos of the 21st century from personal collections grows dim. And most of those images may well turn out to be selfies.

“Folks were less self-conscious [back then],” Reeves notes. “Now, everybody’s posing all the time. Everybody seems like a professional model. Here, there’s a real innocence that I think has vanished, in a lot of respects.

“I wonder, in 50 years with all this digital photography, are they going to have the same kind of archive to leave behind? Will there be this kind of situation for future archivists?”

You can see a small portion of what TAMIS collects on its Facebook page at facebook.com/tamisarchive.