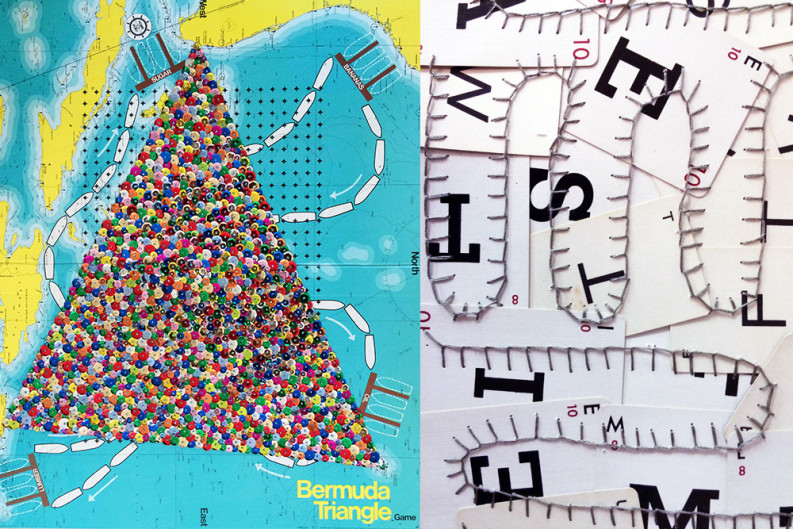 Knoxville fiber artist Nick DeFord is creating art that is terrifically representative of this chunk of the 21st century. He acknowledges the past by making backgrounds of deep history—like artifacts detailing the zodiac or the history of the occult or the lore of the Bermuda Triangle. Then he interrupts himself with something too clever or lovely to ignore, often the intricate intrusion of colored yarn or thread deftly knotted, in a way that contradicts or obliterates what you may have perceived as the whole point from a few steps further back. You can decide for yourself: DeFord will have new work in Knoxville as part of two overlapping shared exhibitions beginning next week.

“The type of work I make is not the kind of thing I can speed up,” says DeFord. “It goes at the pace it goes. It’s stitching. I can only do so many stitches.

“The label of ‘fiber arts’ is important, the same way having a genre is important. It puts you in a canon. It gives you context. So if I’m poking holes in gameboards and sticking sequins to them, there’s not really a genre for that. So when I say it’s fiber arts, because it’s stitching, it’s because I want you to look at this the way you would embroidery. Even though it’s not traditional embroidery, you should look at it that way.”

“Babble (Reflection)” is the largest DeFord piece (44 inches high by 28 inches wide) on display through Feb. 4 at the Tennessee Valley Unitarian Universalist Church on Kingston Pike. Most of the works combine familiar methods of written communication in ways that somehow frustrate or compromise all of them. “Babble” consists of die-cut cardboard letters randomly arranged and stapled together and spray-painted chrome silver. It’s a striking image—some glitz in an otherwise dim and whispery church antechamber—and a fitting challenge to attempt a definition of fiber art.

“The only thing that unifies fiber arts, if you include basketry and weaving and knitting and embroidery, is that it’s modular,” DeFord says. “It’s one thing made up of tiny parts. And it’s repetitive. Whatever the motion is that you do is repetitive. So if it’s throwing a shovel back and forth, if it’s purling and knitting—stapling a bunch of letters together is genreless. It doesn’t really have a genre beyond art. So I would categorize that as fiber art, because I have to categorize things.”

DeFord has multiple art and education degrees from the University of Tennessee and Arizona State University. He’s a writer and published poet. For three years he lectured on drawing in the art department at UT, and he is currently program director at Arrowmont School of Arts and Crafts in Gatlinburg, where he has led workshops within sundry creative disciplines. A fiber artist lecturing college students on drawing is only curious until you learn how DeFord taught himself to draw.

“My parents owned a fabric store while I was growing up,” he says. “So I grew up around all these rolls of fabric. After they stopped doing the store, we had boxes and boxes of fabric in the basement. I thought it was just normal and just background.

“I started using fabric to make my drawings, and I taught myself embroidery. I started doing something very clever, which was stitching pieces of fabric together and calling it collage. Then you realize there’s a whole history of that. Then you feel really ignorant. Then you go to school for it.”

This conversation took place during a visit to the artist’s Knoxville home studio in the final week of 2015. Rather than kicking back after opening the TVUUC show in mid-December, DeFord was busy preparing for Fictitious Additions, a joint show with Jason Bige Burnett that opens next week at Central Collective. He also has impending exhibitions at Coastal Carolina University and the Houston Center for Craft. DeFord says he doesn’t mind sending less-than-fresh work to the out-of-town shows. But back-to-back hometown exhibitions, where folks know and study and buy his art, means a lot of new work.

“It’s a good stress,” he says. “I’d rather be in high demand than no demand.”

DeFord makes a living using himself as an effective and encouraging example to aspiring artists. He lectures. He demonstrates. He mentors. He exhibits. His work is painstakingly detailed and highly crafted and is often bright and underhandedly optimistic. DeFord is talented and learned and accomplished in all manner of studio art-making. And his disarming good humor allows his advice or observations to resonate with aspirants half his age or twice his age.

He says that he thinks his work often reveals his own anxiety. But it has an undeniable levity to it, like the hopeful scavenger in Kafka’s “The Bucket Rider.”

“Because I have this full-time administrative job, I feel like I don’t have time to make mistakes,” DeFord says. “A lot of art is happy mistakes. You explore, you experiment, you play. And through play you find things that work and things that don’t work. You learn from mistakes.

“I would tell people who want to create things that you need to find the best medium. The media matters. The technique is part of the communication, as well as an image or the final object. So if I do a bunch of blanket stitches the fact that I have done that is part of it.”

Nick DeFord and Jason Bige Burnett will show their work at the joint exhibition Fictitious Additions at the Central Collective on Friday, Feb. 5, from 6-10 p.m.