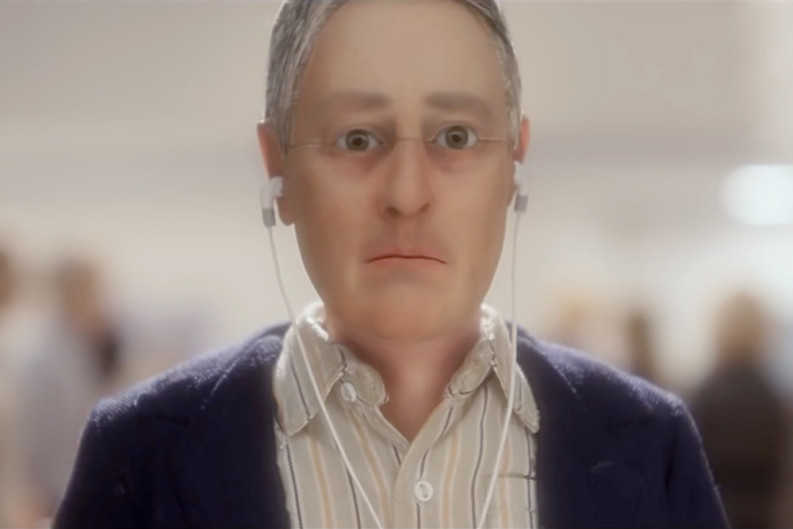 Since Anomalisa, a technically wondrous but thematically frustrating meditation on loneliness and isolation, is written and co-directed by Charlie Kaufman (Eternal Sunshine of the Spotless Mind, Being John Malkovich), there are a lot of assumptions you can make before the first image flickers on screen: A male character will commit merciless acts of introspection as he wrestles with some sort of identity crisis, and a woman will offer him a shining thread that might lead him out of the labyrinth of his own head.

Like many of Kaufman’s characters, the ones in Anomalisa are metaphorical puppets, going through motions that seem dictated by some force other than their own needs and desires. This time, though, they really are puppets—stop-motion ones crafted with 3D printers and animated by Starburns Industries, the studio behind Adult Swim’s Moral Orel and Rick and Morty.

Though there are at least a dozen speaking roles, Anomalisa’s cast comprises only three actors. There’s David Thewlis as the voice of Michael Stone, the film’s lonely, self-absorbed protagonist; Jennifer Jason Leigh as the young woman who might help him reconnect with the world around him; and Tom Noonan as everybody else.

Noonan is such a busy guy because everyone in Michael’s world—his wife, his ex-girlfriend, his young son, the people he encounters on a business trip—sounds alike to Michael, and he finds himself unable to emotionally connect with any of them.

That’s ironic, because he’s a renowned motivational speaker whose shtick is customer service; he travels the country encouraging customer-service reps to listen carefully to their clients and treat them as individuals. When he’s not on stage, though, Michael spends his time moping through a vaguely sinister middle-American hell of airports, hotels, and convention centers, wallowing in self-pity and his self-imposed alienation. He’s really not a fun guy.

Anomalisa plays out over a 24-hour period that finds Michael traveling from his Los Angeles home to a Cincinnati business convention where he meets Lisa (voice of Leigh), a young woman whose voice somehow, miraculously, penetrates his fog of self-absorbed despair. He meets her at the Fregoli Hotel, a place that borrows its name from the Fregoli delusion, a rare psychological condition marked by the belief that all other people are simply one person wearing constantly changing disguises. The question is whether Lisa will lead Michael toward an emotional breakthrough, or if he’ll drag her into his own Kafkaesque horror show.

Visually, Anomalisa, which is co-directed by stop-motion vet Duke Johnson, is stunning. There’s never been anything quite like it, but it’s safe to say that other animators will soon be borrowing from its box of tricks. Rather than ramping up the uncanny valley effect by smoothing over the artifice of their work and turning their characters into creepily precise approximations of humans, Anomalisa’s fabricators take the opposite approach. The puppets are imperfect and asymmetrical, with hinged faces that constantly hint at their mechanical armatures. The movie’s most ingenious conceit is to sell an illusion by showing us all the parts that other artists work to keep hidden.

Sometimes it’s remarkably effective, particularly during the now-famous sex scene that marks the film’s halfway point. By the time we get there, we’ve nearly forgotten we’re watching puppets. The scene is striking, not for its technical wizardry, but for its ability to capture the awkwardness and humanity of such encounters.

If only the film didn’t spend so much time asking us to empathize with a man who has no empathy for the people around him. Ultimately, the real creep factor of Anomalisa isn’t the puppetry, or the fact that so much of it is set in an increasingly eerie, corporate America version of The Shining’s Overlook Hotel. (For my money, the Fregoli is the movie’s most compelling character.) Rather, there’s something intensely discomforting about spending so much time watching the existential struggles of a man who comes across as spoiled and selfish at best and borderline sociopathic at worst.

Outstanding puppetry aside, Michael is a Kaufman character minus the pathos, distilled to pure, concentrated jerkwaddery. Viewers may find that 90 minutes is far too long to spend in his company. There are flashes of warmth and insight, mostly thanks to Leigh’s too-short stint as the title character. They’re few and far between, though, and mostly we’re left with a frustratingly myopic story that never acknowledges the main character’s complicity in his own misery.