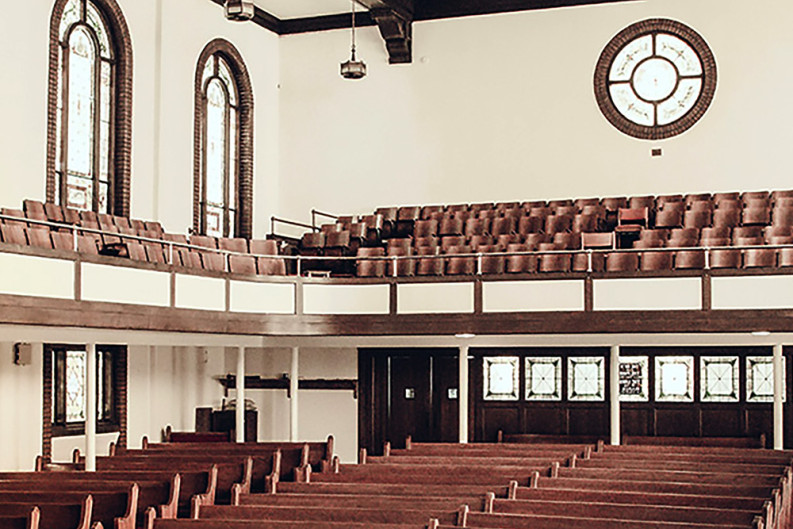 Last fall, when the first news about this year’s Big Ears festival was announced, there was some speculation that the still-to-be-identified fifth venue on the schedule would be First Christian Church, on Fifth Avenue near Gay Street. The four spaces used last year are still on the schedule—the Bijou and Tennessee theaters, the Standard, and the Square Room—with one more listed as “new venue TBA.” As it turns out, the church sanctuary will indeed be part of the festival, as a space for one of a pair of large-scale sound installations. But it’s not the new performing space, which remains a mystery for at least a little while longer.

The church, which developers David Dewhirst and Mark Heinz bought in 2015, will host Veils and Vesper, an immersive six-hour soundscape created by Big Ears composer in residence John Luther Adams.

“We were looking for the right space for this John Luther Adams installation—it’s a very spiritual, contemplative piece, where a church sanctuary is the optimal setting,” says Ashley Capps, president of festival organizer AC Entertainment. “It’s something a person can spend as much time with as they choose. The experience of the piece shifts as you move through the space.”

Live performances to complement the installation will likely be scheduled, too. “For the most part, they’ll be quiet and contemplative.”

Dewhirst has discussed the possibility of developing the church building as a music venue—he’s referred specifically to the Ryman Auditorium, in Nashville, as a precedent—but cautions that the Big Ears installation isn’t necessarily part of that process.

“It’s awaiting development,” he says. “We’re working on a long-term use for the church that fits in with the community and town. As you can imagine, in the land where you’ve got historic theaters that are out there, they’re tough to get programmed and get them done and make them bankable and make them work. But we’re committed to seeing a really great use for that place.”

As for its current condition?

“Hey, it’ll be a 100-year-old, pretty neat sanctuary space that’s pretty special,” he says. “It hasn’t been gummed up or made to look like 1970. You walk in it and you think, wow, this place is 100 years old. And it’s got that charm. What we’re trying to do is to do the lightest touches to it that bring its infrastructure up and useful for the next 100 years while keeping all the authenticity and the original charm.”

Capps says the other new venue will be announced soon. Big Ears is scheduled for March 31-April 2.