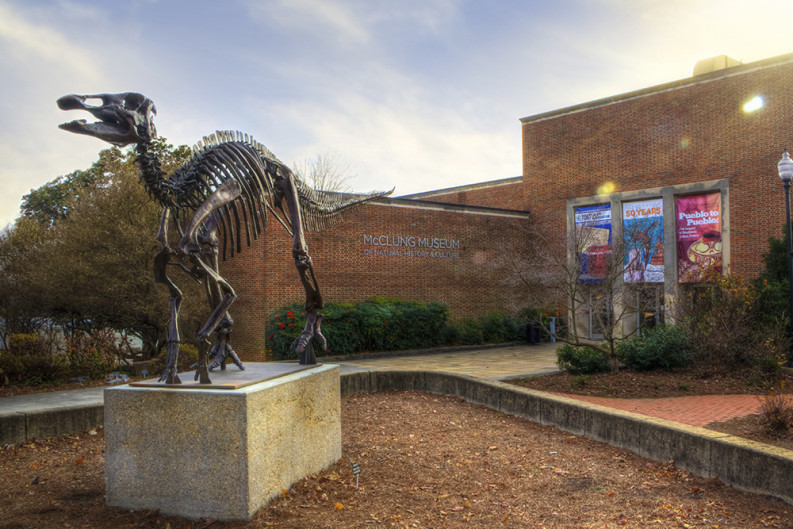 The University of Tennessee’s scholarly Frank H. McClung Museum of Natural History & Culture is an amenity like none other in the region.

The museum’s new exhibit, opening this weekend, is Maya: Lords of Time, surveys that Native American culture’s impressive advances in measuring time, through stone calendars. The exhibit will offer a combination of replicas and Central American artifacts for view. On Saturday, Jan. 30, the museum will host a “Family Fun Day: The Maya and their Texts,” at 1 p.m.

In recent years the museum has developed new emphases on local history. A compact permanent exhibit now highlights Knoxville’s role in the Civil War, with an unparalleled display of artifacts from the 1863 Battle of Fort Sanders.

Joan Markel, the museum’s curator of Civil War history, is commencing the sixth year of the museum’s popular Civil War lecture series at the museum Sunday, Jan. 24. The talk, “Clergy, Physicians, and Press: Ministering to the People,” is free, and begins at 2 p.m.

The McClung Museum is located on Circle Park. Established in the 1880s, Circle Park is a historic site in itself. Knoxville’s first public park, originally known just as “the Circle,” was once surrounded by Victorian residences. Circle Park was not considered part of UT’s campus until about 50 years ago.

A museum of anthropology was first proposed in the 1930s with an unexpected impetus. UT took a leadership role with helping the Tennessee Valley Authority excavate Native American sites affected by the new network of dams and reservoirs. Funds for a permanent museum became available in 1955, through a gift from prosperous attorney and world traveler John Webb Green and his wife Ellen McClung Green. The Greens lived in the Fountain City area and led the establishment of Fountain City Park. They named the museum project as a memorial for Mrs. Green’s father, Frank H. McClung, a 19th-century Knoxville merchant. The elderly Greens both died within two years of their gift, and never saw the museum they made possible.

Designed in a modernist style by UT architect Malcolm Rice and the local firm of Barber McMurry, the museum was completed and opened to the public in 1961, but more formally dedicated, with regular hours, in 1963. It was the first UT building established on Circle Park, which later became home to the College of Communication and Information as well as UT’s main administration offices.

The McClung name was once prominent in Knoxville, but McClung Museum, which is administered by the university, is not associated with the McClung Collection (formally the Calvin M. McClung Collection) which is located in the East Tennessee History Center downtown, and is administered by the Knox County Public Library. Calvin M. McClung was Ellen McClung Green’s brother.

The names confuse people daily, especially considering that McClung Museum also has an impressive “collection,” and the McClung Collection has enough interesting exhibits and hanging art that it could also be called a “museum.” (UT’s McClung Tower, which is near McClung Museum, is named for another McClung altogether.)

One of McClung Museum’s collections is that of Eleanor Audigier, the Knoxville arts patron who founded the Nicholson Art League, before moving to Europe and a life of collecting art from around the world. When she died in Rome in 1931, she left her impressive collection of decorative art to the university. Some of the Audigier collection is on display at the museum today.

In September, McClung will unveil Knoxville Unearthed: Archaeology in the Heart of the Valley, a rare exhibit of artifacts found by archaeologists, especially organizer Professor Charles Faulkner, in the city of Knoxville.

A bronze cast of an Edmontosaurus, a duckbilled dinosaur who once roamed North America, greets visitors to McClung Museum on UT’s Circle Park. He’s affectionately known as “Monty.” The actual fossilized bones of the skeleton, owned by the museum, are sometimes on display. Courtesy of Frank H. McClung Museum of Natural History & Culture.