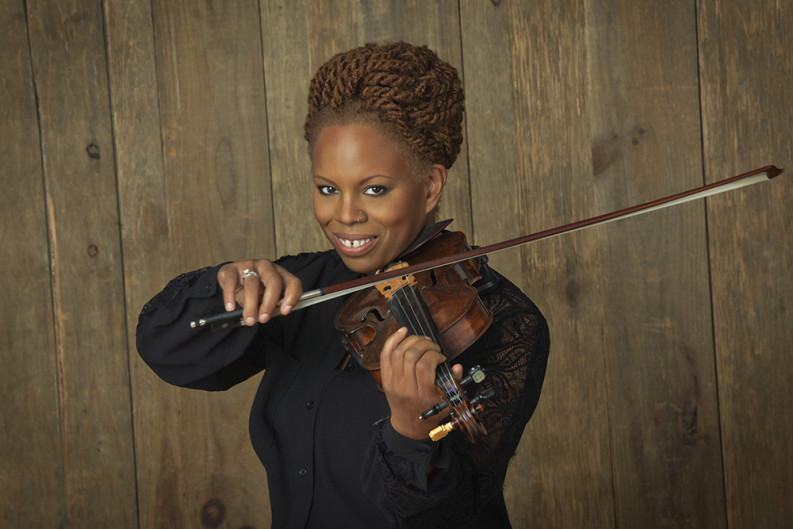 When Regina Carter decided she wanted to switch from classical music to jazz, in the mid 1980s, she transferred from the New England Conservatory of Music, in Boston, to Oakland University, in Rochester, Mich., near her home town of Detroit. There, she found a distinguished jazz department—but no formal program for violin.

“I remember going in to the big-band director there and telling him I want to learn jazz,” Carter says. “He said, okay, you’re going to sit right there with the alto saxophones. You’re going to be in the alto section. He said, breathe when they breathe, listen to how they phrase, just do everything they do. So basically I was learning how to be a saxophone player on violin.”

That unorthodox education paid off—in the 30 years since landing among those undergraduate saxophone players, Carter has become the most celebrated jazz violinist of her generation, known for a full, emotional tone, nearly flawless technique, and a restless creative imagination. With her own band, she has recorded jazz standards, traditional African music, country and folk tunes, and pieces from the classical canon, and she’s collaborated with Mary J. Blige, Billy Joel, Aretha Franklin, and Wynton Marsalis.

Part of that has been necessity. Even though the violin has been a part of jazz since its beginnings—from black Southern string bands in the 1920s, New Orleans swing orchestras, and Stéphane Grappelli’s work with the Quintette du Hot Club de France in Paris in the 1930s—it’s an often overlooked and unappreciated instrument. Carter has had to create her own path through the contemporary jazz industry.

When she moved to New York in 1991, Carter took any gig she could get—traditional jazz combos, avant-garde groups, pop and R&B sessions. That wide-open approach has remained with her during her solo career. Each of her eight solo albums has been different from the others. In recent years, since winning a MacArthur genius grant in 2006, she’s taken special interest in her own musical roots. Reverse Thread (2010) and Southern Comfort (2014) focus on African folk music and Southern folk and country, respectively, with Carter and her band revisiting and reinterpreting those old forms. Before that, she recorded an album of her late mother’s favorite songs and one combining improvisation with the classical repertoire. (That one, Paganini: After a Dream, from 2003, was recorded with an 18th-century violin that once belonged to Niccolo Paganini.)

Carter’s next project, she says, will be dedicated to the music of Ella Fitzgerald—another opportunity to lend fresh ears to familiar jazz traditions. “It’s celebrating Ella, but not in a straight-ahead way—just taking the pieces apart and doing something different or new,” Carter says. “I just want to see what I can do with them—I mean, 50 million people do these records. But it takes me a minute to try some new tunes and see what’s going to happen. I can have an idea but if the idea doesn’t really work, I don’t want to force it. I just want to see. I don’t want to disrespect Ella or her music.”

For her show here next week, Carter is leaving her band behind to perform with the Knoxville Jazz Orchestra in a format that will recall her days at Oakland University.

“Big band is probably my favorite configuration to work in,” she says. “It’s so much fun to hear all that sound around me and just feel the rhythm section and the horns. It’s like being on a train when it really gets moving. … There’s something about big band, and when it’s the right big band and they’re swinging, you know, you can’t sit still. I don’t care what kind of music you like or grew up listening to, when a big band is rocking it, you’re going to be tapping your foot.”

Regina Carter performs with the Knoxville Jazz Orchestra at the Square Room on Tuesday, Jan. 26, at 8 p.m. Tickets are $32.50.

CORRECTION: An earlier version of this story stated that the New England Conservatory of Music didn’t have a jazz program in the 1980s. The school didn’t have a program for violin in jazz.