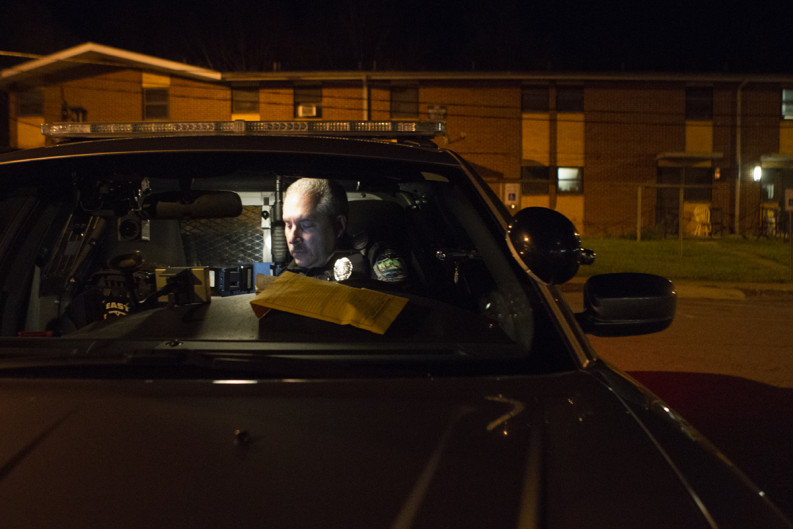 It’s one of the first truly cold nights of the winter when Officer J.D. Hopkins parks his patrol car next to a dumpster at Walter P. Taylor Homes and starts walking. The sodium lights in the parking lot don’t so much scatter the darkness as turn it the color of yellowed parchment. It’s closing in on 11 p.m. and 38 degrees, but plenty of people are in the parking lots that wind like a maze through the complex: men in ski caps huddled together smoking, young women gathering to hit the clubs, even children running and laughing.

“Hello. How are ya?” Hopkins calls to three teenage girls mincing along in heels and revealing tops, their curls bobbing.

“I mean, not cold,” she says quickly, ducking her head and speeding up.

Ahead of him he hears the first shout: “Sarge!” The voice is not calling to him.

The word echoes away, from building to building, but in different voices. “Sarge! Sarge!”

“You hear that?” he asks. “That’s for the drug dealers, letting them know I’m coming.”

Hopkins tries to walk through Walter P. two or three times a night. He’d like to arrest more dealers, but he figures if they leave because he keeps showing up, he’ll have done his job.

Several different people approach Hopkins and ask to speak with him privately. Someone jokes that Hopkins has picked up a few pounds.

Hopkins is white, with a grayish buzz cut and a way of carrying himself that projects both compassion and authority. Everyone he encounters at Walter P. is black. But Hopkins has worked this neighborhood for the last 16 years, and for stretches before that. He knows these folks. He’s eaten their barbecue. 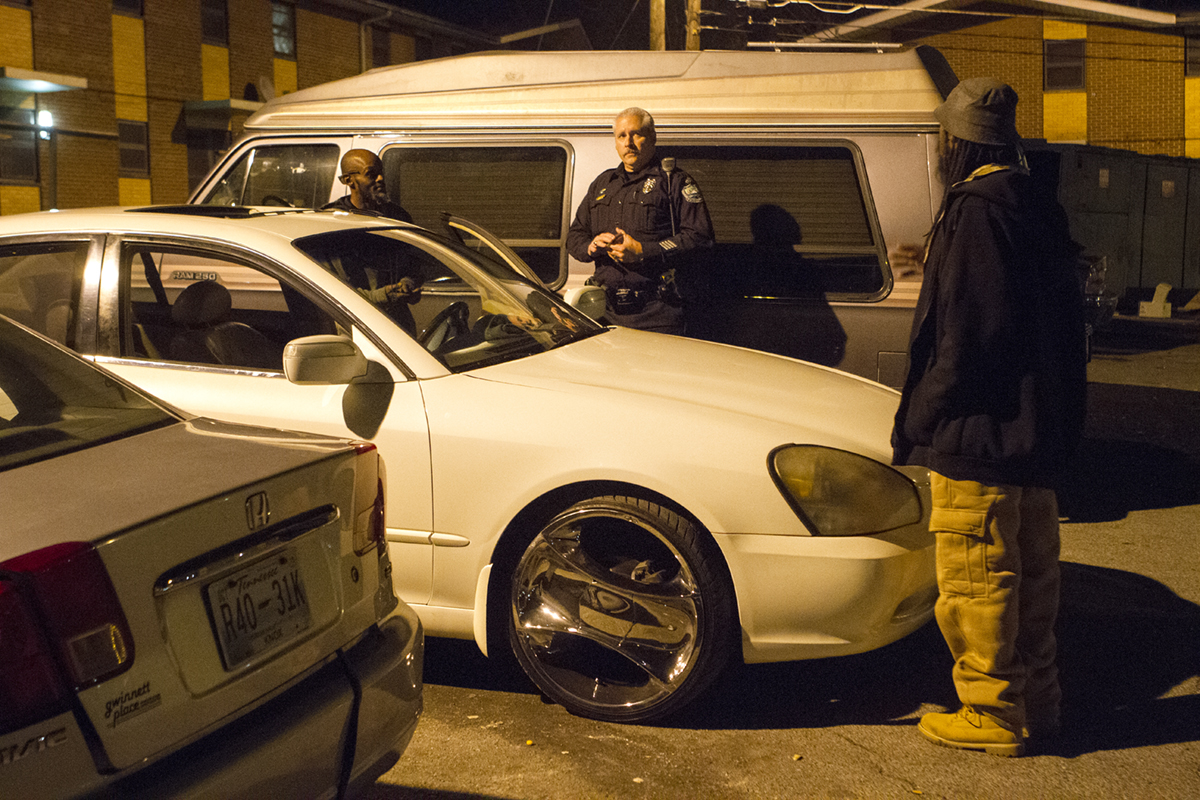 Police Chief David Rausch says that community policing is different at KPD than at many other law enforcement agencies: It’s a department-wide philosophy instead of a “program.”

“Every officer is trained in community engagement and what that means, and that every contact … is an opportunity to build trust in the community and to build relationships,” Rausch said at an FBI-sponsored forum on race relations this fall.

Community policing is a general strategy focused on building ties and partnerships with neighbors as a way to address crime near their homes and businesses. In some towns, it’s an initiative with its own squad, whose members walk neighborhoods, sometimes with neighborhood-based precinct offices.

Knoxville doesn’t do that, Rausch says, because every officer should be using community policing principles—and because “walking the beat” doesn’t work in most of the city’s spread-out neighborhoods.

“Walking patrols aren’t effective outside the urban environment,” he says. “I encourage officers to stop and chat with people when driving.”

However, conversations with black community leaders and residents of Mechanicsville and East Knoxville demonstrate a huge demand for walking patrols.

Residents would trust police more if officers spent even one night a month walking the neighborhood and getting to know people, argues Darius Hunt, an East Knoxville resident on parole for a drug conviction.

“There’s no common level of human respect,” he says. “If they came into the community and made it to where people got to know them on a first-name basis, it would be different. As soon as these guys come out of the academy—a lot of people have never lived in these areas and only know what they see in movies. Make [the new recruits] see these are people’s children, just like you are.”

“If you could put precinct officers in a neighborhood, I guarantee crime would drop 50 percent in that area,” says Joe Kendrick, executive director of Knoxville Community Step Up, a group that aims to reduce the number of black men in jail. “It would be better to not have us meet when everybody’s angry.”

Capt. Eve Thomas, who heads the KPD internal affairs unit and who used to oversee the East Knoxville KPD district, says the department tried mandating that patrol officers spend some time on bikes. But then patrols had trouble responding quickly enough to calls.

At a recent meeting of the Police Advisory Review Committee, Sgt. Shane Watson said most officers would love to spend more time walking the beat, but they feel like “slaves to the radio,” rushing from one call to another.

Gary Gamble, whose barber shop, Gam’s Hair Fashions, is a community gathering place in Mechanicsville, expresses disappointment about the attitude he sees from police in the neighborhood. He says they rarely get out of the car.

When they do, he says, “I have tried to engage with them, and I don’t get a positive response, with a couple of exceptions,” he says.

Gamble’s shop is one of the few successful businesses in the once thriving blue-collar neighborhood that in recent years has grappled with poverty and crime. Many days, all the barber’s chairs are filled with black men, mostly in their 20s and 30s, getting a sleek trim. The “Gam’s Urban Flava” shop in the front offers black T-shirts that say, in white lettering, “Know Your Rights.” A long, detailed reference list follows, with advice such as “Say clearly and repeatedly, “I do not CONSENT TO ANY SEARCHES” and “Cops can and do lie.”

Gamble finishes trimming businessman Chuck Brown’s hair. “Police presence is one thing,” Brown says. “Interaction is another. That’s what the whole beat-walking in the neighborhood is all about.”

Rex Howard, another barber at Gam’s, says when an officer walks in the shop, he’s frowning and holding his hand near his gun.

“I just want to see some cops smile now and then,” Howard says. “You don’t always have to wear your badge on your face.”

Some officers, like Hopkins and Lt. Gordon Gwathney (who was defended by Walter P. residents when he had to subdue a violent, drug-addled woman there in March) find a way to spend more time getting to know locals. But they do have the advantage of patrolling populations concentrated in a small area.

Hopkins says he requested the night shift because there are fewer calls and more opportunities to “saturate the area” and focus on specific neighborhood problems, though he still sometimes faces busy call nights.

This spring, KPD officers started working the same shift every day for the first time, so they see the same people and circumstances regularly. (Before, they worked a beat, but at different times of day.) Although it’s too soon to tell the impact on crime, Rausch says, “There’s more consistency, and that will start to resonate.”

Officers who do build relationships can make a lasting difference. André Canty, an organizer of the Knoxville Black Lives Matter group, says his first role model was the late David Gaston. Gaston was a black policeman who worked as Canty’s school resource officer at Green Elementary School and later South-Doyle Middle School. Canty recalls that Gaston would approach young black kids “not in an authoritative role” but as a friend, even if they had been in trouble before.

Police officers need to spend more time developing these human connections, Canty says. “Not just a finger in the face saying, ‘You’re a thug.’ Call them by their name. When a person has a name, they’re not a walking set of stereotypes. They’re a person.”

Community liaisons might be the closest thing to what residents mean when they ask for community policing. Liaisons are officers who volunteer to be the contact for a neighborhood group, attending neighborhood association meetings and inviting calls at all hours about neighborhood safety problems.

“You develop a relationship, and it just makes people more comfortable that they’re really being listened to, because they do get things done,” says Paul Ruff, president of the Chilhowee Park Neighborhood Association. At the group’s request, their liaison officer has instigated more traffic patrols; his predecessor in the job helped arrange drug busts and prostitution stings, including at a house next door to Ruff’s.

Still, liaison assignments often last only a year or two. Ruff says the Chilhowee Park liaison officer has actually been assigned a new North Knoxville beat and is no longer in the neighborhood regularly.

“The core of community policing is not that we solve crimes,” she says. “It’s that we talk to people and they solve crimes by telling us what they know.” 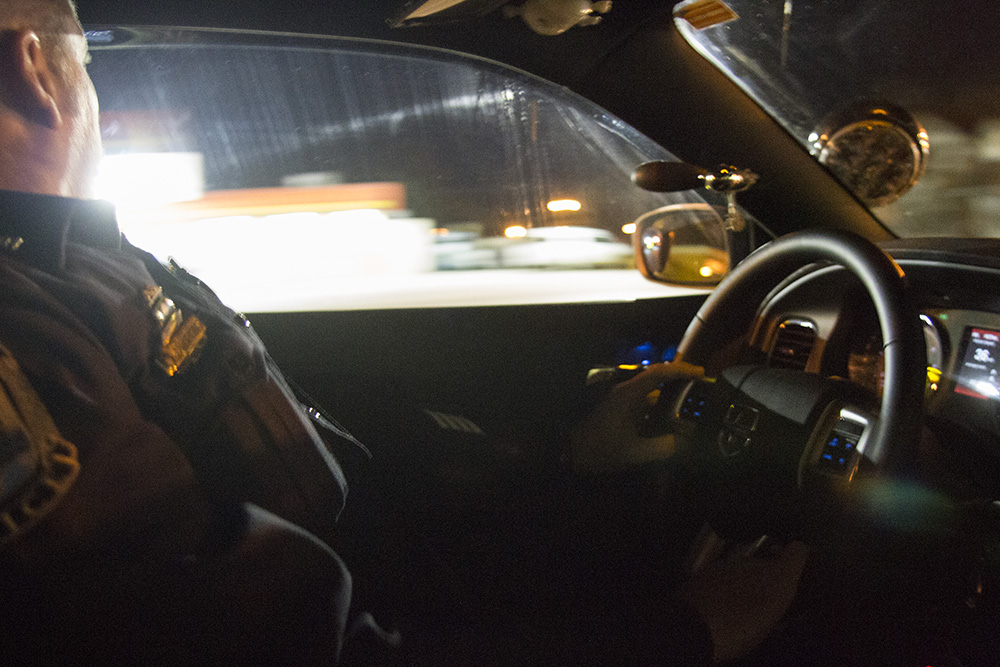 After trying to track down a report of gunshots on South Chestnut Street, Hopkins answers a call about a brick thrown through a window near the corner of Beamon Lake and Yellowstone roads. He recognizes the house. He dealt with a fight there between two large groups several years back.

Tonight’s vandalism seems to be retaliation for a more personal fight between a man and a woman whose friends and relatives got involved in the revenge.

Officer Kevin Crigger arrived first and is talking with people in the house when Hopkins joins him.

A woman says two sisters threw the brick, accompanied by “Dave somebody.”

The men know their beat. Both ask at the same time, “Super Dave?”

“We know where Super Dave is,” Crigger says grimly. She continues for a moment before he has a second thought. “Wait, Westside Super Dave?” he clarifies.

“No, not Cocaine Super Dave!” she says with horror.

Hopkins nods. “It ain’t the crazy one,” he says to Crigger. “It’s the Super Dave that runs around with prostitutes.”

“Yes! That’s the one!” the woman agrees. One of the alleged brick-throwers “works the street,” she adds.

(How many Super Daves are there? Three, Hopkins says, although the third one “ain’t that super.”)

The witness sends Hopkins to an address on Castle Street to look for the girls, Super Dave, and matching bricks. At first Hopkins sees no bricks and thinks she was mistaken. He drives slowly up the street looking for other matches, but he keeps muttering, “She grew up out here. She knows the neighborhood.”

So he returns to the house. Super Dave, in a baseball cap and blinding white tennis shoes, has just pulled in.

Super Dave readily admits he rode along with the sisters “as backup” but denies brick-throwing involvement. He calls one of the girls, and Crigger speeds off to get her side of the story.

“You want your brick back?” Hopkins asks Super Dave.

Hopkins says nothing more. But he retrieves the brick from his back seat, walks past Super Dave, and sets it next to identical bricks securing the base of a basketball goal in the driveway.

Silently he retraces his steps to his car. Super Dave watches, also silent.

Hopkins drives away. He’s going to swing by the after-hours clubs on his beat, then make his way back to Walter P.

• Can KPD Overcome the Doubts of Knoxville’s Black Community?

• How Well Does KPD Police its Own Officers?