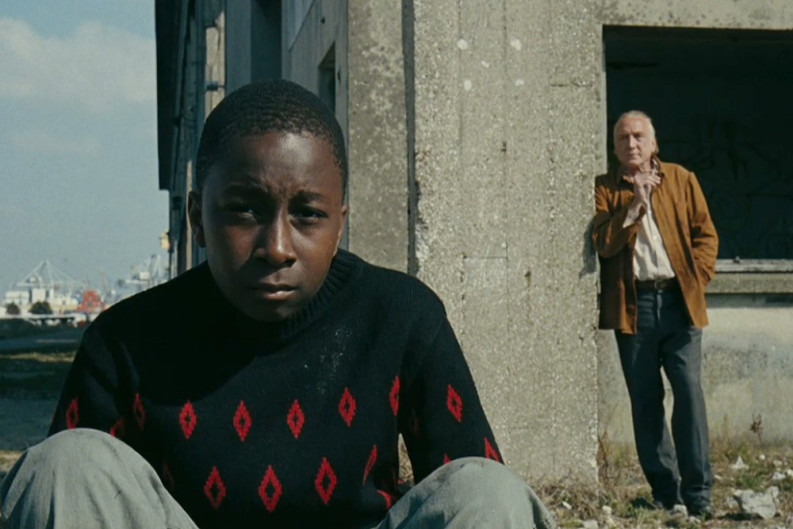 The theme for this column was intended to be films that might effectively cheer and brace one to meet a new year. The films that volunteered for the job seem to be especially well suited for 2016, which is beginning amid great unease and hostility and with tolerance and empathy in too short supply. Be the tree that rises above this frail and divided world.

Le Havre (2011)
This fantastic film features an intriguing cast of displaced persons and refugees. An African boy named Idrissa, the fugitive we come to know best, arrives in Le Havre as contraband, living in a freight container. He escapes capture and is helped toward his mother, living undocumented in London, by a flat-broke bootblack named Marcel. Marcel’s radiant dignity is such that his neighbors, equally poor, join forces to conceal the child while raising the enormous sum necessary to smuggle him across the channel. Subplots involve a rockabilly fundraiser concert and a cure for cancer. Le Havre is not necessarily what you’d call a message movie. Unless, perhaps, the message is that the foundation of all heroism is impeccable manners.

Soul Kitchen (2009)
Director Fatih Akin knows what’s in a film title, and in a restaurant name. Set in Hamburg, this food flick has one of the best soul-music soundtracks I’m aware of. Zinos is a German-Greek chef/restaurateur. He hopes to follow his girlfriend to Japan, so he sets to work establishing new management for Soul Kitchen. The palate of the new chef is weak on ploughman’s lunch fare but strong in after-hours aphrodisiacs. And Illias, brother of Zinos, to whom Zinos has transferred ownership of Soul Kitchen, is a pathological gambler on work release from prison. As with so many perfect plates, the recipe is more complicated than the simple, satisfying result.

Bob and the Monster (2011)
Bob Forrest founded the L.A. band Thelonious Monster in the early 1980s. The other monster to which the title alludes is Forrest’s addiction to heroin. This doc features tons of crappy VHS small-club concert footage, with Forrest fronting the Monster and demonstrating how he led critics to coin the phrase “drunk rock.” Forrest failed to kill himself over a 20-year span of trying. In the words of Fishbone bassist Norwood Fisher, Forrest pulled a 180 in 1996. Since then, Forrest has made himself available in person, by phone, and via modern media to people going through what he went through. Forrest says that the only way to give value to his own suffering is to “give hints to what’s possible” to those who suffer similarly. Near the film’s end, Forrest is a cook/busboy/dishwasher in a Hollywood greasy spoon that is gridlocked because he’s on the pay phone. The sympathetic owner asks him what he’s doing on the phone. He answers, “Saving lives, Iris, saving lives.”

Tickets (2005)
Over a day’s train ride through Italy, three great directors—Italian Ermanno Olmi, Iranian Abbas Kiarostami, and self-ordained Scotsman Ken Loach—imagine the experiences of three disparate groups of travelers. Olmi’s silver-haired businessman writes a letter containing the words he wishes he had spoken to the beautiful young woman who arranged his travel. Kiarostami sympathizes with a young man who wishes to exchange the obnoxious older woman who arranged his travel. Those two daydreams do nothing to prepare you for the blunt-force trauma at journey’s end, where Loach’s three teenage soccer-fan hooligans mature more in the time it takes to walk the length of the train than many sheltered Westerners ever will. Through the plight of an Albanian family, the world makes these boys aware of exactly what it needs from them. They surprise everyone—especially themselves—by spontaneously inventing ways to deliver.