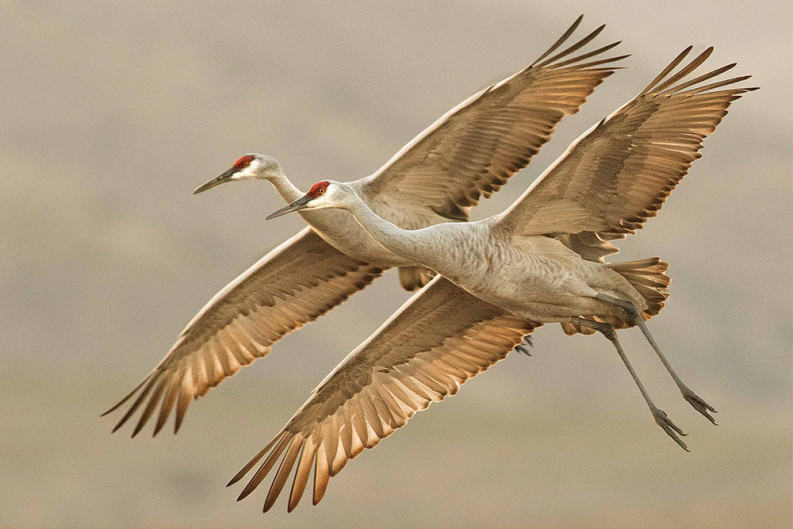 One of the most spectacular wildlife migrations in the Southeast is occurring just south of Knoxville, and you can get a good two-hour view of it from the water for about the price of a restaurant meal. As thousands of sandhill cranes converge on the Hiwassee Wildlife Refuge, scientists from the Tennessee Aquarium in Chattanooga are preparing to lead crane cruises aboard the River Gorge Explorer.

These birds are striking in appearance, being up to 4 feet tall and soft gray in color with deep red foreheads, white cheeks, and long pointed beaks. As a species they’ve been around for at least a few million years, older than most birds alive today. Some say they are the oldest surviving bird species. There are three subspecies that live year-round on the Gulf Coast, Florida, and Cuba, respectively. By far, though, most sandhill cranes migrate from Canada and the northern states of Wisconsin and Michigan to southern states and Mexico to spend the winter eating a varied diet of plants and small animals.

They are social birds that tend to live in pairs or family groups all year, and during migration and winter months these groups band together, foraging and roosting by the thousands in open wetlands and fields. For our local flocks, the Hiwassee Wildlife Refuge is a welcomed winter home, including 2,500 acres with interspersed food plots planted just for them with corn, milo, and millet.

It’s easy to think that sandhill cranes are rare like their cousins the whooping cranes, but they’re not. Although there were only about 50 sandhill cranes left by the 1920s due to habitat loss and over-hunting, the population has rebounded remarkably to hundreds of thousands of birds. The reason so many people have never seen or heard a sandhill crane has more to do with the habitat requirements for this species that gathers in such huge numbers for months at a time. As a nation we have drained, filled, farmed, and developed most of our wetland acres. Finding a large enough open wetland to accommodate several thousand big, ground-feeding birds at one time is a tall order in the lower states. Fortunately, we have just that in the form of the Hiwassee Wildlife Refuge managed by the Tennessee Wildlife Resources Agency.

Starting in the early 1990s, cranes discovered the wildlife refuge where the Hiwassee River joins the Tennessee River, and they’ve been coming back every year since in ever larger numbers. Many will continue on to other refuges in Georgia and Florida, but many thousands will stay in and around Meigs and Bradley counties until spring when they migrate back to their summer breeding grounds. The biggest crowds of cranes occur in January while both transients and winter residents are present.

To celebrate the occasion, TWRA is sponsoring the 26th Tennessee Sandhill Crane Festival, Jan. 16-17. Each of those days, from 8 a.m. to 5 p.m., free shuttle buses will transport crane fans from the Birchwood Community Center and the Cherokee Removal Memorial Park to the refuge’s viewing area. The usual festival components of food concessions, merchandise vendors, live music, children’s activities, and other special programs will be ongoing.

For a view from the water, you can reserve a seat on the River Gorge Explorer for a two-hour cruise around the wildlife refuge beginning at either 10 a.m. or 2 p.m., Jan. 8-10 and Jan. 15-18. Cruises depart from the Sale Creek Marina, and passengers can choose between open and climate controlled areas of the boat. Naturalists will be on board to talk about the history and ecology of the area, and they will point out eagles, whooping cranes, white pelicans, and other locally-rare birds that might be sharing the space with the sandhills. Tickets are $35 for Tennessee Aquarium members and $45 for non-members. All cruises sold out last winter.

Flooding from heavy Christmas rains caused the aquarium to cancel the first crane cruises scheduled for Jan. 1-3. But on the first Sunday afternoon of 2016, several birders with binoculars and spotting scopes are getting a good look at cranes from the refuge’s viewing area at the end of Priddy Lane in Meigs County. Hundreds of cranes stand in a field as if planted there. More line the shore, watching the shallow water for potential food. Others fly overhead, chortling their unique rolling, trumpeting call that can be heard a mile away. Birders like to share what they see and know, and one gentleman has trained his scope on a couple of bald eagles sitting side by side in a tall far-away tree and invites us to take a look. Another man has four different duck species in his lens, and he names them for us as we peek through his scope. As the sun begins to set, vast numbers of Sandhill cranes fly in to roost for the night.

The Hiwassee Wildlife Refuge is one of just a few places in North America considered critically important to sandhill cranes, and it highlights the importance of maintaining large tracts of wetlands and other wild places. Giving our political and financial support to acquiring more public lands for wildlife management is one of the best gifts we can give future generations so they have a chance to witness spectacles like the sandhill crane migration.