Up a Creek With No Name - The Knoxville Mercury 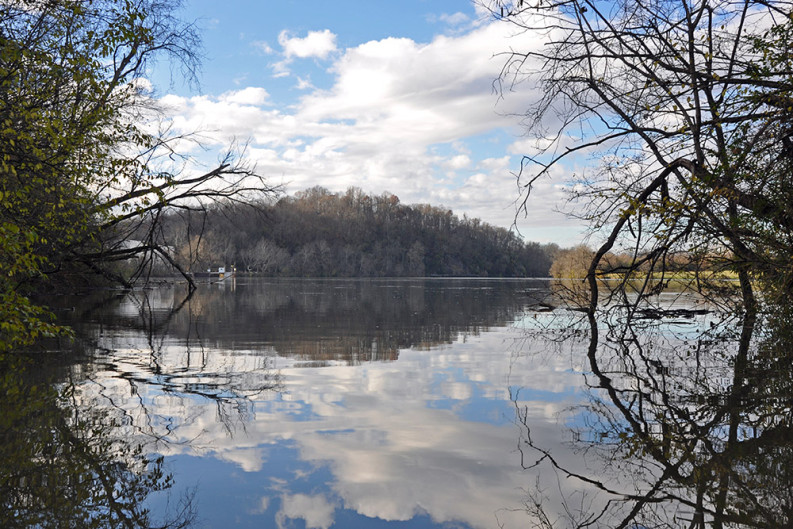 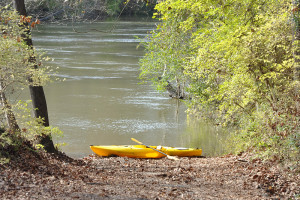 I had reached that stage of holiday exhaustion where too much consumption and stimuli had veiled me in a narcotic mist of fatuous inertia. Nothing would restore my senses like an excursion into the wilderness, where, as Wendell Berry writes, one may “rest in the grace of the world.”

I launched my kayak on an island just outside Knoxville. While islands are normally places of quiet refuge, this one happened to have a small air strip, perhaps not what Berry had in mind when he wrote his poem, “The Peace of Wild Things.” No matter. An intimate little boat ramp, narrow and tunneled over with trees, led down to a channel of the Tennessee River that scooted between Dickinson Island and South Knoxville, a good portion of it washing against the wooded bluffs of Ijams Nature Center.

I had the vague goal of getting to Burnett Creek off the French Broad, but I underestimated how the rains of recent days had swollen the rivers with crazy eddies, careening flotsam, and a big-shouldered brute of a current.

After 30 minutes of paddling to get out of the half-mile long chute beside Dickinson Island, I had sweated through two shirts. Where was the tranquil “still water” of Berry’s poem? It was trying to push me back to the ramp, away from my creek, back to land and the frenzy of American holidays. I fought it with constant paddling and veered to the left of Otter Island, away from the crowded trails of Ijams Nature Center, not wanting anyone to see if I happened to capsize in this cold, muddy current with few places to crawl up on the bank.

At the point of Otter Island, the junction with the main channel got devilish. Something below stirred with its own giant paddle and lit flames to boil the water in places that appeared and disappeared, jerking first my bow, then my stern one way and another. As I huffed and grimaced, the world went on as usual. Kids screamed with delight on the trails of Ijams. A train whistled. And it seemed like there was some kind of air show going on with so many small planes droning about.

Out in the main channel, the big green and red navigational buoys seemed drunk as they were listing so violently, the current here just as patchwork, just as strong, as it had been in the Dickinson Island chute. People on the Ijams boardwalk built out over the river pointed and stared as I windmilled the paddle trying to make progress. At this point, Burnett Creek was out of the question. I would aim for the creek mouth upstream of the storage tanks at Ergon Paving and Asphalt, a creek where I had seen a beaver dam from a bridge over Will Skelton Greenway. I’d never been there by boat, and I’d always wanted to see how far up it I could go. 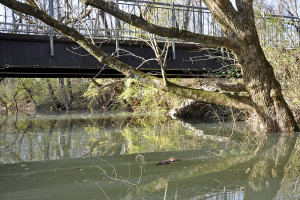 Every time I glanced up from my work, the boardwalk and the people staring were in the same place. Some were aiming cell phones at me. I finally angled toward the north side of the river, away from the spectators, to the inside of the bend at Goose Neck Shoals.

Even though there were dams upstream on the French Broad and the Holston, both them likely controlling the discharge of water, this river was flexing its muscles like in the old days, before the dams, and it was carrying the weight of its authority against my feeble will. A hawk perched on a fencepost just a few feet away from me, but I could not pause in my paddling long enough to take a picture. I told him to wait there for me so I could photograph him on the float back.

Back on the south side of the river, at the mouth of the creek, everything changed from turbulence to calm. People passed up above me walking, running, biking, talking and having a great time. I was like a troll down there, but my slow, stealthy progress up the creek with no name (that I knew of) was just the medicine I’d been looking for.

The water was so high, I could scoot over the beaver dam and farther away from the trail, into the utter isolation of the urban wilderness. Nothing but squirrels and songbirds in the heavy brush around me. I leaned back and lost myself in the trees that formed a skeletal arch above me. Truly, this is what my fellow Kentuckian Wendell Berry meant by the “grace of the world.” Here was that still water.

Just as I was getting drowsy and about to nod off, panic and chaos erupted from the left bank. I’d been so stealthy that I startled a deer bedded down among the privet. Never have I seen a deer move so awkwardly and disappear so quickly.

Back on the main channel, I angled toward the hawk but overshot it in the strong current and had to work to get back to the place I could get my camera out. He was still there, all fluffed up in the sun. Still there, still there… until I got to the place where I could shoot between bushes, and he serenely glided up to the next fence post, out of range.

I was back at the ramp faster than I wanted to be, but refreshed from the exertion and the discovery of a new place. At home, I searched for the name of this creek that I had just explored for maybe a quarter of a mile of peace. Google, USGS, TDEC, TVA, Outdoor Knoxville, Tennessee Gazetteer: they all showed it, but they didn’t name it.

I started to like this idea of a nameless creek; how much deeper could you be immersed in the wilderness than to explore something unnamed by humans, where you had penetrated beyond the natural barrier that beavers had built? Maybe I would name it: “Crazy Deer Creek” seemed pretty cool, to me at least.

I posted a query on social media, along with photos. People knew this creek but none by name. I got more and more excited about naming it: Berry Creek, after the writer? 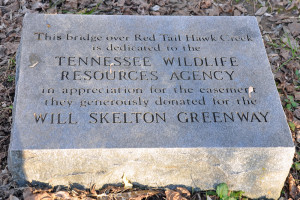 That’s when I made a mistake. I went for a hike the next day. To the bridge over the creek. And there beside the bridge was a memorial, etched in stone, which thanked the Tennessee Wildlife Resources Agency for its easement over “Red Tail Hawk Creek.”