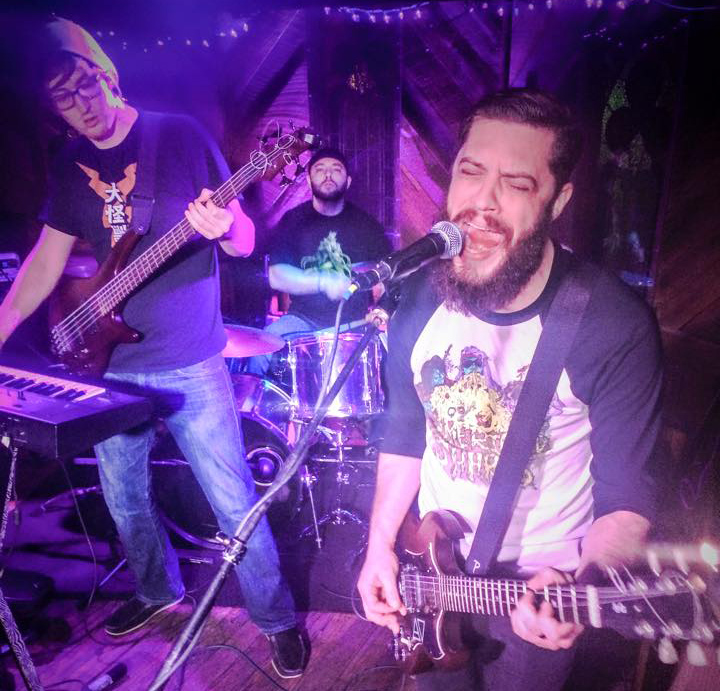 When the members of Realm got together in late 2014, it didn’t seem like the start of anything special. Drummer Nick Leichtweis hadn’t played in a band for seven years; guitarist Jake Lonas’ jam band, the Jojax, was slowly dissolving; bassist and keyboard player Kurt Bell was fiddling around with digital production and solo electronic pop on his computer. But after a single practice, all three knew that they had landed exactly where they wanted to be.

“We knew what we wanted to do,” Lonas says. “It’s not like we really had to go find our sound. The first time we met up, we knew exactly how we wanted it to sound, the tones we wanted, and what we wanted to write about. It clicked, and we figured we should keep on doing this.”

What they wanted to do was simple: heavy, head-nodding psychedelic rock that even people who don’t generally like heavy psychedelic rock would get into. And songs about Dune. (“There’s only two songs we’ve ever written that aren’t Dune-related,” Lonas says. “And they both have a Blade Runner theme.”)

Easy to define, but not necessarily easy to execute. Lonas and company wanted to make music heavy enough to give them credibility among local metal fans but accessible enough for a more general audience. And nerdy enough to satisfy their own sci-fi obsessions without alienating people who haven’t read Frank Herbert or Philip K. Dick. They sometimes sound like missionaries for marginalized music. It can be a treacherous path to navigate.

“It’s off-putting sometimes,” Leichtweis says. “As soon as you put that badge on it, that it’s a metal band, people are like, oh, I don’t like metal. People do the same thing with country. The whole idea was to make it as weird and confusing and heavy as we can and then let’s find our way back to what’s just fun. What can you bob your head to? What can you have fun to? We don’t make a ton of money, we’re never going to get signed or go on a huge European tour. We’re just trying to have fun.”

Lonas adds: “The first time we played Preservation Pub, all the hipsters and barflies who are always there, dancing around to a jam band, they were right up front, headbanging with everybody else. That’s what were aiming for. We want to appeal to everybody.”

Now, after a year of increasingly significant shows, including recent opening slots for Intronaut and Whitechapel, Realm is releasing its first album, a self-titled collection of stoner-rock sci-fi anthems that places them near the top of a burgeoning local scene of like-minded bands (Mass Driver, Summoner’s Circle, and O’Possum).

“I figured we’d be able to play a show here and there but that we’d have to step out to Bristol, Chattanooga, Asheville, Nashville, whatever, because there just isn’t that big a calling here for heavier bands,” Leichtweis says. “But it’s actually larger than I thought it was.”

The new album will satisfy all but the most prickly fans of bands like Electric Wizard, Monster Magnet, Clutch, and Sleep—subterranean riffs, gut-punching bass, and walloping drums combine with spaced-out guitar solos and occasional moments of melody and grace. It was recorded almost entirely live (only Lonas’ vocals were tracked separately) on the third floor of the Concourse so there was nothing on it that couldn’t be reproduced onstage.

“We wanted to keep it organic, to make it obvious that it’s us playing this music, not a laptop that we’ve got set up,” Lonas says.

The result, engineered and mixed by Brandon Cagle, who runs sound at the International and for Whitechapel, actually turned out better than the band members expected.

“The album came out a little crisper and cleaner than we really wanted,” Leichtweis says. “So we went back and asked Brandon if he could shitty it up a little.”

Now, with an album finished and a year’s worth of local shows behind them, Realm is looking ahead—to its first shows outside of Knoxville, new audiences in town, and new songs for the next record.

“We’ve definitely been putting it to the grindstone,” Leichtweis says. “As soon as we knew this could go somewhere, we were like, okay, we’re going to write a song a month, play a show a month, set up some goals. We got the demo recorded and then got the album done as soon as we could. I think it’s the most committed I’ve been to a band ever.”

Realm celebrates the release of its new self-titled CD at the Doom in the Hills show at the Concourse (940 Blackstock Ave.) on Saturday, Jan. 9, at 8 p.m. with O’Possum, Summoner’s Circle, and Mountain King. Tickets are $10 at the door. 18 and up.