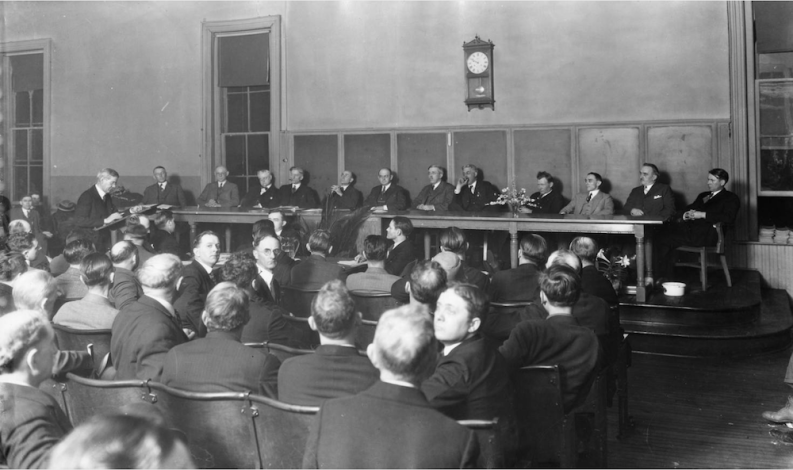 The Board of Aldermen, forerunner of Knoxville City Council, began meeting 200 years ago.

Although Knoxville was considered a city as early as 1791, when it was the capital of the United States government’s Southwest Territory, and home of a biweekly newspaper called the Knoxville Gazette, it did not need a formal city-style government in its earliest years. The relatively few decisions that needed to be made for the city were made by a commission set up by the territorial government, which met here. During early statehood years, an elected commission met irregularly.

After the city was more formally incorporated, the first municipal council was known as the Board of Aldermen. It first met 200 years ago next Wednesday, on Jan. 13, 1816. Its members were Thomas Emmerson, Thomas McCorry, Rufus Morgan, James Park, Thomas Humes, James Dardis, and John Cullen.

In those days the mayor was elected by the Board of Aldermen, and in 1816 their choice was Thomas Emmerson (1773-1837), a lawyer and judge originally from eastern Virginia. The position came with no salary, and the Board met every January, just after their own elections, to pick a new mayor.

Two of the original aldermen are obscure; details of the background of McCorry and Cullen are elusive. Of the five we know about, none were from Tennessee. Rufus Morgan (1781-1826) was born in Connecticut.

At least three of Knoxville’s first aldermen were immigrants from Ireland. Park was from County Donegal, Humes from County Fermagh, and Dardis from County Westmeath. Dardis, a merchant who kept a store on Cumberland Avenue, was Catholic, and tried without much success to start a Catholic congregation in Knoxville.

Aldermen Park and Humes have something else in common besides their Irish accents. Both are noted for buildings still standing in downtown Knoxville. Humes built the Lamar House, which we now know as the front part of the Bijou Theatre, including the lobby, the upstairs gallery, and part of the Bistro. Long operated as a hotel, it was completed in 1816. Unfortunately, Humes died when he was about 48, only eight months after he began serving as an alderman.

Park, a merchant who also sometimes wrote for the local newspaper, built a brick house at the corner of Walnut and Cumberland in 1812, and lived there. It now serves as the headquarters of the Gulf & Ohio Railroad. Park served as Knoxville’s second (and fourth!) mayor.

Coincidentally, both aldermen had sons of the same name as their fathers, and both became prominent clerics. James Park, the younger, was a Presbyterian minister. Thomas Humes, the younger, was a journalist who became an Episcopal minister—and, later, president of the University of Tennessee. Humes Jr. was also, arguably, Knoxville’s first historian.

In its early years, the Board of Aldermen met in the Knox County Courthouse, located across Main Street from the current courthouse.

The city built a City Hall in 1868, a three-story brick building that stood on the north end of Market Square, about where the stage is today.

It was there that Knoxville’s first black aldermen went to work. Elected by public vote in early 1869, Isaac Gammon and David Brown served as two of 19 aldermen. They were among the first blacks elected to public office in the South.

City Council met on Market Square for more than half a century. The building was eventually connected to the Market Hall, and all of it was torn down in 1961.

The board was becoming known as City Council by the time city government moved into the former School for the Deaf building. Built in 1848, it was already a historic building when the group began meeting there in 1924. The building was known for about 55 years as City Hall. Now one of central Knoxville’s oldest buildings, it’s the current location of Lincoln Memorial University’s School of Law.

City Council moved to the current City County Building, designed by architect Bruce McCarty and his firm in 1979. Now composed of nine elected members, the group meets there every other Tuesday at 7 p.m.

Featured photo: A meeting of the Knoxville  City Council in 1926, 110 years after the first meeting of the Board of Aldermen. Courtesy of the Calvin M. McClung Historical Collection.