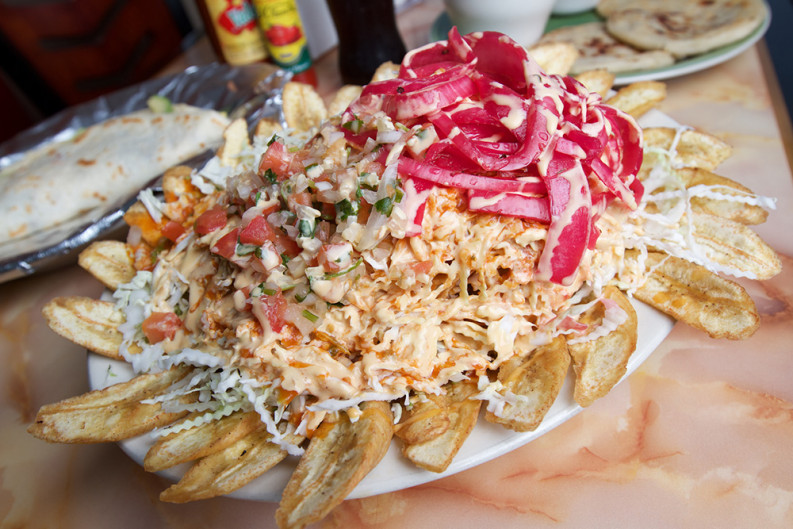 Despite the difficulty it makes for giving directions to friends, let alone strangers, I’m a little enamored of the way that roads change names. For example, if you leave Happy Holler by way of Central Street and head north and across Sharp’s Ridge, the name of the road becomes Bruhin Road just after an intersection with Dutch Valley Drive. If, perchance, you have issues with name changes and opt to avoid this one by turning left onto Dutch Valley, you’ll be confronted with your issues again in mere seconds when Dutch Valley morphs into Central Avenue Pike as it bends out of its easterly direction and turns to the north.

Aside from the name changes, it’s an interesting drive, and a much more pleasant and navigable way to reach Merchant’s Drive than the course that Interstate 75 affords. This section of Central Avenue Pike is an interesting strip dotted with businesses housed in mostly aging buildings that live in stark contrast to the shining and well-lit commercial mass just up the road that surrounds the entrance and exit ramps for the interstate. In the midst of these businesses lives Sabor Catracho Latin Cuisine. It sits in a section of the pike that includes a handful of Latino businesses that haven’t much in the way of signage to attract much more than destination traffic. In my visits, I seemed to be the only stranger in the house.

It’s not a restaurant that will grab your attention, and if it does you may well be bewildered about where to park, but both of the neighboring businesses are friendly about sharing their spots. At any rate, it’s not hard to miss and dismiss the place owing to its lackluster appearance. There is, however, one tiny bit of verbiage on its little sign that makes it worth the effort to stop: Honduran Home Cooking.

Honduran food isn’t a particularly exotic cuisine. Like much of Central American cooking, the raw ingredients are familiar with a handful of interesting, but hardly exotic, foods like plantain and cassava. Honduran food, at least as expressed at Sabor Catracho, is earnest and essential without aspirations beyond a desire to feed you well.

That said, the menu only has a handful of Honduran dishes alongside a particularly famous dish from El Salvador and a whole page of Mexican favorites. It seems to be a safe and calculated decision that thankfully doesn’t leave the traditional dishes swimming in an inauthentic pool of Monterey Jack. Still, I’d love to see more Honduran dishes show up. (After researching the subject, I’m desperate to try Honduran tamales.) 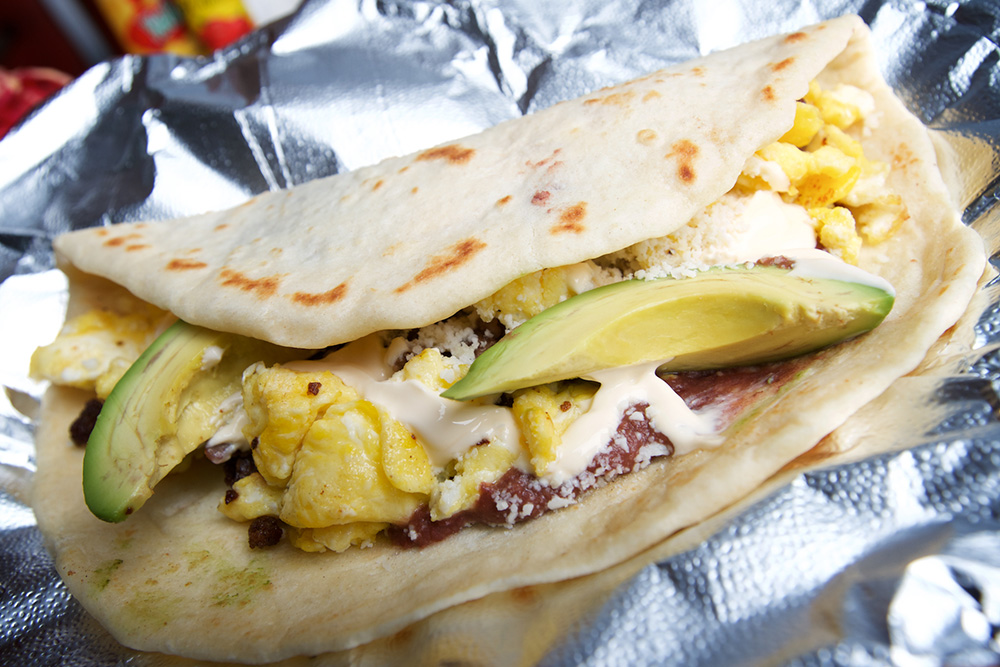 Notwithstanding my desires, the food that’s there is good, especially the Baleada Especial. This very traditional breakfast and street food consists of a large flour tortilla stuffed with a mix of ground beef, refried beans, scrambled eggs, slices of avocado, and crema. Crema is like sour cream, but it’s creamier, perhaps a touch more salty, and not quite sour. It struck my palate as more luxurious in taste and texture than traditional sour cream but with similar effect. The dish itself tasted exactly like what it was, but with an unusual pop of savory flavor from the refried beans.

Honduran frijoles refritos aren’t much like the standard mushed pinto beans that get sloshed about town. These start as kidney beans that are cooked, mashed, and cooked and cooked again until they become a dark and glossy paste that’s nearly caramelized. It adds an umami-like savor to everything it touches.

The beans also work as an excellent companion to a traditional breakfast plate that includes carne asada, scrambled eggs, a pile of soft, fried ripe plantains, a bit of what appeared to be queso fresco, and a healthy dollop of crema right in the middle. There was also an interesting bit of sausage; it tasted like kielbasa, but it had been cut and fried in the shape of a floret. On the whole it was hearty, simple food, but the generous application of those refried beans—more like a sauce than a side dish—added a very satisfying level of unexpected flavor and richness that often comes from careful reduction.

Sabor Catracho also serves Pollo con Tajadas, which is basically fried chicken with fried green plantain and Honduran slaw. This is a mess but one that won me over despite the stack of napkins I required to eat it. Here the plantains are like very crisp, starchy fries. At least they start out that way because they sit underneath the even crispier fried chicken, which, in turn, rests beneath a mountain of cabbage dressed with some secret sauce that permeates everything. It’s a mountain of food—and the real challenge is that the chicken is fried on the bone. This pollo is a dish that comes with a dress code or at least an insouciant attitude about wearing your meal on your clothes.

Despite the mess and my initial confusion, I loved it. Eating it required a freewheeling and dexterous collaboration of fork and fingers that was both challenging and fun. The chicken is fried pretty hard, so there were plenty of super-crisp bits to stand up to the goop of the cabbage salad. The plantains added more texture and crunch, which, along with their pillowy interior, gave the plate a lot of contrast that was both delectable and delightful. 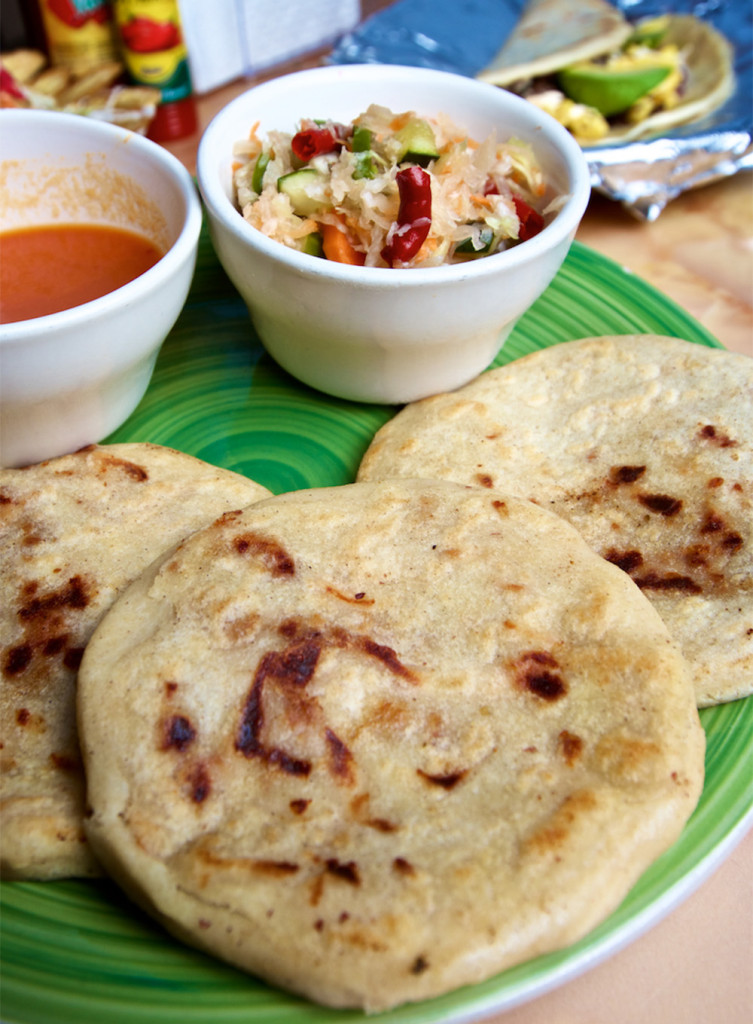 El Salvador is represented by the noble pupusas—they’re thick corn tortillas stuffed with cheese and chicharron and served with a little curtido (a Salvadoran version of slaw). It’s a simply presented dish that, like most of these offerings, is flavorful and filling. The stuffing is rich and beautifully offset by the little tang from the curtido.

The restaurant is owned by the same folks who run Campbell Station’s La Cabana Cuban Flavor, and while the quality of the food is as good, the places couldn’t be more different. At Sabor Catracho, the dining room is about as divey as they come. The lighting is garish and the décor is dominated by a big-screen TV situated on the rear wall and a monstrous jukebox in the front corner.

Still, while the simplicity may not make for a fancy date night, the straightforward, even plain décor is an honest representation of the food’s ethos. Like much of Central American cuisine, the food here is hearty and comforting and not cheesy or remotely spicy, though there is hot sauce on every table if you need some heat.