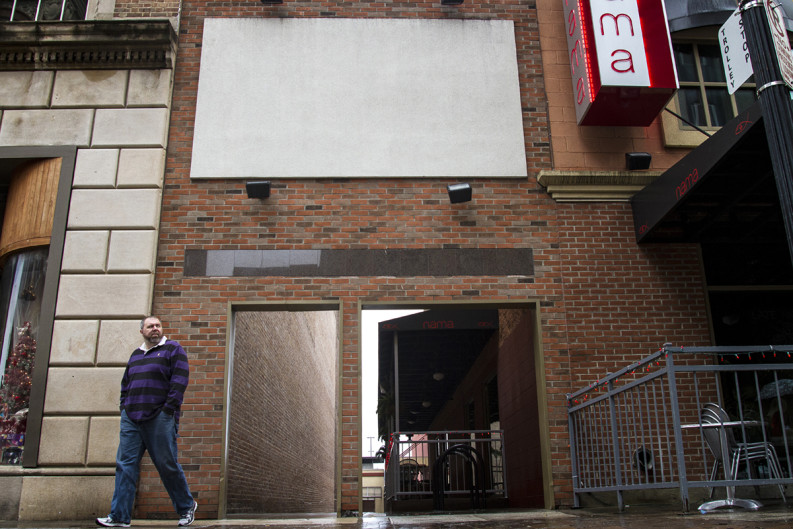 Request For Proposals—Mural Program
Awards variable amounts for completion of one or all of three murals on designated spaces in downtown.

Whatever ill-fated New Year’s resolution you may be grappling with as you attempt to work off that hangover of holiday cheer, fear not. The city of Knoxville has some opportunities (or at least some money) for folks looking to make a difference and do some good in their neighborhoods and communities in 2016.

Two programs looking to fund interesting ideas for boosting neighborhoods and the city’s urban streetscape have upcoming deadlines. One is seeking proposals from neighborhood groups for projects to beautify or spruce-up their respective ‘hoods, and there’s also a call for applications from artists to complete any or all of three public murals planned to be inked before year’s end. There’s different criteria and expectations for each, of course, but pretty much any Knoxvillian neighborhood groups, residents looking to start a neighborhood organization, or those with artsy credentials can apply.

NEIGHBORHOODS
A little more than a year ago, the stone outbuilding behind Christenberry Elementary School in North Knoxville was primarily being used as an oversized storage shed. But with a bit of elbow grease and a few thousand dollars from the city’s coffers, the once underutilized structure has been transformed from a dusty relic to a bustling clubhouse and gathering place for the Oakwood-Lincoln Park neighborhood.

“We found some stuff in the closets that had to be 30 years old or more—stuff so old that it’s cool again, it’s vintage,” Molly Conoway says with a laugh. It was about this time last year that Conoway, a member of the Oakwood-Lincoln Park Neighborhood Association, started work on the group’s application for the city’s Neighborhood Small Grants Program, a newly relaunched annual fund divvying out between $500 and $3,000 to neighborhood groups with bright ideas. Oakwood-Lincoln Park landed $2,500 to get its club house up and running, covering the costs for some major cleanup work, minor building fixes, and furniture for the old schoolhouse annex.

“We absolutely wouldn’t have been able to do any of this without that grant money,” she says. “The money was really important, but it’s also a way for us to see that the city really wants our neighborhood to flourish.”

Originally launched by the East Tennessee Foundation more than a decade ago, the Neighborhoods Small Grants Program started getting city funding in 2009, but both agencies decided to put the program on hiatus in 2011 to focus on other priorities. It was relaunched last year, divvying up a total of $22,900 to 12 neighborhood groups across the city, according to David Massey, neighborhood coordinator for the city of Knoxville.

This year it’s back with as much as $43,000 it hopes to fork out to community organizations, but there’s a catch. Each project must be matched on a dollar-for-dollar basis by the community with donations of goods and services, labor, or money pledged from other sources. At least one-third of that match must be volunteer labor, a requirement meant to build camaraderie and community amongst neighbors, Massey says.

“It’s that participation among neighbors, working together to improve the community, that we’re really looking for,” he says. “It’s through that communication, that camaraderie, and working together that they build the capacity to do bigger and better things.”

Last year a number of grants went to put up neighborhood signs, although some were more unique. Examples include the Oakwood-Lincoln Park club house, and $2,500 to help the Fourth & Gill neighborhood host Artoberfest (which cost $10 per ticket) and construct a tool shed behind the Birdhouse Community Center. The Burlington Residents Association received $2,100 to conduct a survey on neighborhood needs, host workshops, and put on a “Burlington Community Day” event.

In 2016 the city is hoping to see proposals geared more toward creating a sense of place, adding character, or addressing some underlying issue within communities looking to apply, Massey says.

Massey continues: “It’s clear from a number of ways you can look at it that strong residential neighborhoods make it easier to recruit corporations to your community, it means a more robust economy, a strong and more stable tax base, and generally a higher quality of life. We believe one of the vehicles for achieving that is resident-led, resident controlled organizations.”

The final application deadline is not until March 14, but there are two upcoming deadlines in January that interested neighborhood groups must meet. To be eligible, a member of your neighborhood group must contact the city’s Office of Neighborhoods at 215-3232 no later than Jan. 13. Someone must also attend one of two mandatory workshops scheduled for later this month, Thursday, Jan. 14 and Wednesday, Jan. 20, both at 5:30 p.m. in the Cansler Family YMCA (616 Jessamine St.).

STREET ART
Another city-funded project is looking to add a splash of color (although it could very well be black and white) to some barren walls of the inner city. For the first year, the city is backing the completion of three murals on different “canvases” around downtown, issuing a Request For Proposals (or RFP) in December. There have been other public art projects in the past, of course (the large neighborhood murals under Interstate 40 just north of Parkridge, along with the postcard-esque feature on the side of Visit Knoxville’s building off Gay Street), but those were funded independently or through different means.

“This is the first time to my knowledge the city has put out an RFP for public art,” says Liza Zenni, executive director of the Knoxville Arts and Culture Alliance and member of the city’s Public Art Commission. The PAC must approve any public art done on city property.

This year the plan is to have three installations completed. By far the largest is slated for a series of 11 concrete retaining walls lining Volunteer Landing Lane near the Outdoor Knoxville Adventure Center in south downtown. The two other locations are on Gay Street; one is a rectangle above an archway next to Nama Sushi Bar in the 500 block, the other a brick wall of the Lerner Lofts at the corner of Gay and Wall Avenue one block north.

The city has a whopping $460,000 tucked away for public art projects, though not all of that may go into these three murals. That money was saved up over the past two budget years, according to city assistant purchasing agent Janice McClelland.

“We don’t know if there’s going to be any more money [for public art] in next year’s budget or not,” she says. “That budget is still being worked on.”

Knoxville’s Office of Purchasing has put together a 33-page RFP detailing the requirements for artists to apply. Zenni says she hopes artists won’t be intimidated by the thick-bound guidelines, which is mostly fine-print but does lay out in detail what’s expected and how applications will be judged.

“The contracted project will include design, materials, and installation of three designs,” the first page reads, later noting that all applications most include an itemized list of materials and prices. There also needs to be a one-page letter of interest, a resume detailing your artistic awesomeness, mock-ups or renderings of the art you’re hoping to bestow on the city, and 10 high-resolution copies of previous work along with brief descriptions. There are a ton of other specific requirements, so be sure to read the full RFP, also available on the city’s Office of Purchasing website at knoxvilletn.gov/purchasing.

The deadline for completed proposals 11 a.m. on Feb. 15. If you have questions, they need to be directed to the Office of Purchasing in writing no later than Feb. 8. Mail or deliver them to Office of Purchasing Agent (City County Building, Room 667-674). Zenni notes that she cannot answer any questions directly due to legalities with the RFP process.

“We really wanted to give artists two months to respond, then we will not take long at all to determine which of the proposals we’ll go with,” she says. “Just be patient and don’t be intimidated by the whole packet. You’ll find what you need throughout the document, but most is probably contained in about two pages of information.”

Zenni says all of the murals should be complete well before the end of 2016, with hopes at least one will be done in time for Statehood Day on June 1.