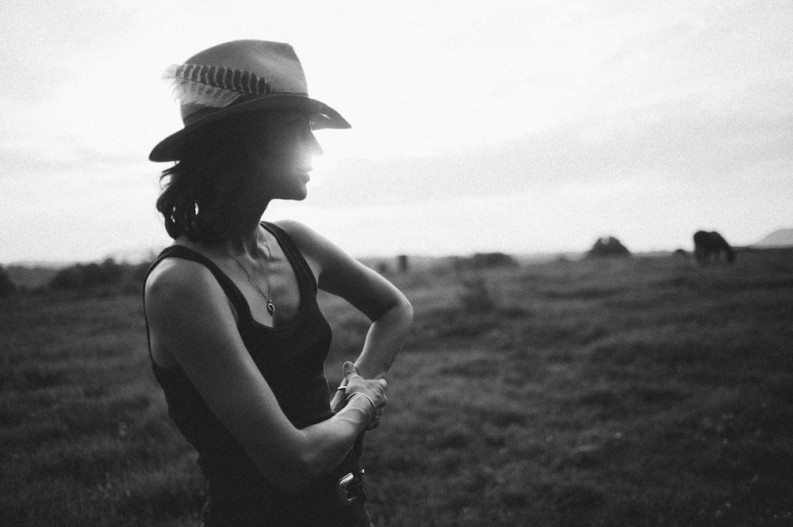 When we tracked Jennifer Niceley down, early this week, she was driving back home from a show at the Nashville club known as the Basement and pulled over near Mt. Juliet to chat. She’s popular in Music City, where she lived and worked for a decade.

“Nashville’s obviously oversaturated with songwriters and singers, now more than ever,” she says. “But one thing I appreciate about Nashville is that 99 percent of the time, when I play there, people really do listen. The Basement has a very attentive audience, even though a lot of people there are really jaded. I’m putting something a little different on the table, and they appreciate that.”

She’s playing at Pilot Light on Wednesday, Dec. 16, her first show there in several years. She has sometimes called her music country, just to have something to call it.

But it doesn’t really fit any commercial genre. Acoustic guitar with original lyrics often gets lumped in the folk category, but Niceley’s singing voice has urbane jazz inflections, and the structure of most of her songs don’t follow familiar patterns, no verse-chorus-bridge-chorus expectations. “I still see it as poetry put to music,” she says.

If she did call it country, she’d have a more authentic claim to the word than most of Nashville’s broad-brimmed cowboys. On her last album, Birdlight, she sings the old Jimmie Rodgers blues tune, “No Hard Times,” a rare cover on a mostly original album, conveyed with an easy Western swing. When she sings, “Ain’t got no blues, got chickens in my backyard,” it’s no fib. Indeed she does have chickens in her backyard, and cows and horses and corn, like the guy in the song.

Niceley lives in an old tenant’s cottage on a 400-acre spread along the Holston River, where her family has farmed for generations. “It’s a magical place, split between rolling hills, used for pastureland, and fertile river-bottomland,” she says.

The land is in transition. “It’s kind of an exciting time” in agriculture, she says. Long a dairy farm, the Niceley spread is adapting to interesting new times.

“Over the course of six or seven years, we have agreed, as a family, that we don’t want the food we raise to be sprayed or contaminated by any chemicals at all. We only grow non-GMO seeds. Our beef cattle only eat grass. We are still in the process of creating a diversified operation that in many ways mirrors what most small farms in this region were doing until not long after farming became industrialized.”

She and her father, state Sen. Frank Niceley, are experimenting with heirloom corn, producing cornmeal and grits, and supplying raw materials for the new Knox Whiskey Works on West Jackson Avenue. They also grow spelt, a winter wheat, and alfalfa, plus multiple critters.

It keeps her grounded, adding an interesting complexity to her music, which otherwise sounds ethereal, impressionistic, dreamy, elusive, like something far from the ground. Much of Niceley’s work on Birdlight sounds like the musings of a cheerful, contented ghost. It’s her second full-length album, after Luminous in 2008; she put out an EP in 2011, Body and Soul. Nashville bassist and producer Jon Estes talked her into Birdlight a couple of years ago, when she performed at his wedding. He did most of the production on the record (the opening tune, “Nightbird,” was produced by Knoxville’s Scott Minor). It’s unusual among her work in that it employs a deft, often subtle mix of multiple instruments, including horns and strings. “Jon made a lot of the production decisions, but I was not opposed to them. He and I both wanted to see different colors and textures on this record.”

Birdlight is mournful in tone, but she’s been writing more love songs recently. “I’m in a place where I’m trying to find balance.”

Her whole album’s online, at jenniferniceleymusic.com. She makes no money on the website itself. Although she finds the current state of the recording industry “confusing,” she believes it’s “maybe more important than ever for people to keep making good music, recording good music, even though it can often feel pointless, or the competition overwhelming. I feel like it may be more important now than ever for an artist to keep separate the seeds of their artistry, their true creative drive, and what may or may not become of the finished product after being released into the world.”

For now, she’s got goats to milk. “Now that it’s winter, things are less strenuous, physically, than they have been,” she says. “Which is great because I’ve had more time for writing and for riding my horse. Right now in the mornings I have to tend to my pastured laying hens. If I can, mornings are when I really like to write. Most of the rest of the day gets taken up fulfilling orders for farm products and deliveries. I take care of selling our heirloom corn—taking corn to a mill to be stone-ground and then delivering it in town. There’s always afternoon and evening chores, and inevitably various other things on the farm that someone might need help with.

“Really living with the land—just being present to see what comes up and what needs to be done—is a big part of the way of life there.

“And life is a work of art in itself.”