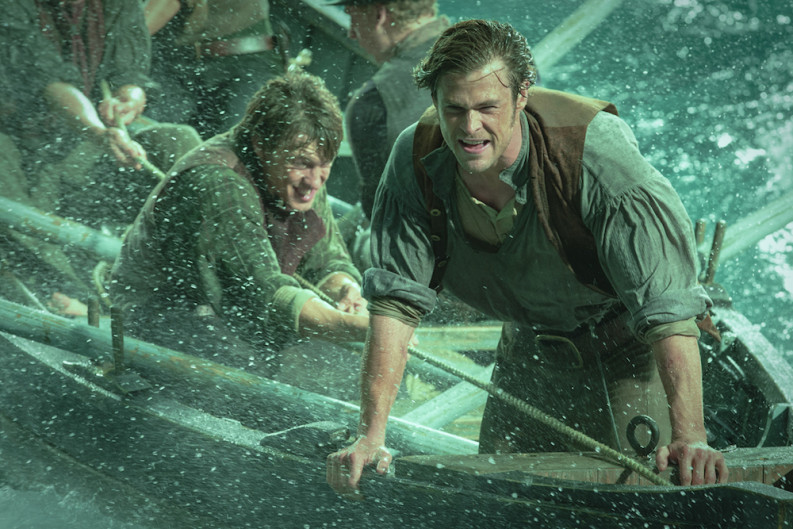 Let’s get this out of the way right now: In the Heart of the Sea is no Moby-Dick, nor does it want to be. Though it draws from the true story that helped inspire Herman Melville’s masterpiece, the $100 million survival epic from Warner Bros. dodges the inevitable comparisons by removing everything that makes Melville’s novel a masterpiece. The themes that have kept us returning to the book for more than a century and a half are nowhere to be found in Heart’s lavishly produced but thinly scripted tale of survival, endurance, and dirty, wet men shouting incomprehensibly to one another as they’re occasionally interrupted by a scene-stealing, 100-foot whale.

The movie draws on some lofty source material, though. Besides taking cues from Melville’s classic, director Ron Howard and screenwriter Charles Leavitt work from Nathaniel Filbrick’s 2000 nonfiction book, In the Heart of the Sea: The Tragedy of the Whaleship Essex, which was in turn based on a pair of gloriously titled firsthand accounts of said disaster: Thomas Nickerson’s The Loss of the Ship “Essex” Sunk by a Whale and the Ordeal of the Crew in Open Boats and Owen Chase’s Narrative of the Most Extraordinary and Distressing Shipwreck of the Whale-Ship Essex.

In case those titles, and the film’s illustrious pedigree, leave anything to the imagination, Heart recounts the grim story of the ship’s final voyage. To say that it was an ill-fated journey is a colossal understatement; over the course of their many months at sea, its crew contended not only with the rigors of whaling but also with violent storms, dissent among its ranks, a devastating attack by a enormous whale, and the even greater horrors of survival in the wake of the attack.

If it sounds upsetting, don’t worry—the film employs a number of devices, both structural and stylistic, to check its occasional flirtations with tension and compelling drama.

For starters, there’s the clunky framing device. One of Heart’s two storylines plays out over the course of one night as Melville (Ben Whishaw), seeking inspiration for his book, annoys a grizzled seaman into telling him a story that the sailor has thus far refused to tell. Tom Nickerson, played as an older man by Brendan Gleeson and as a boy by Tom Holland, is the last surviving crewman of the Essex, which sailed from Nantucket in 1819 and eventually became one of the most notorious maritime disasters in history.

The bulk of the film is, of course, an account of that voyage. From the beginning, the ship’s politics are as choppy as the waters it sails. First mate Owen Chase (Chris Hemsworth) expected—and deserves—to command the ship, but that position is given to blue-blood neophyte sailor George Pollard (Benjamin Walker). The tension between the men bubbles over soon enough, when Pollard makes the foolish decision to test his crew by steering the ship into a squall. Afterward, Pollard wants to turn tail and head home right away, but Chase convinces him they should stay at sea until they’ve filled their hold with precious whale oil. This sets them on a course that will eventually lead to their legendary confrontation with the storied white whale.

The problem isn’t the cast. Hemsworth can’t quite reel in his character’s New England accent, but he’s a likeable lead, imbuing Chase with brawny swagger as he prowls the decks of the Essex, then channeling Errol Flynn when the action sends him climbing into the ship’s rigging or perching on its mast. Holland, who made such an impression in The Impossible, is largely wasted as a character whose only dramatic purposes are to act as a window into the story and to receive exposition about whaling and sailing, but his presence is nonetheless welcome.

Unfortunately, the battle that Hemsworth fights with the Nantucket accent is more riveting than anything that plays out onscreen. From the moment they set sail, the actors are burdened with dialogue that’s as heavy-handed as the film’s well-meaning attempts at ecological commentary, and the characters never amount to anything more than one-note stereotypes of macho stoicism. While Howard’s previous feature, the exhilarating Formula One biopic Rush, framed its manly posturing in a wider, more thoughtful context of competition and ambition, In the Heart of the Sea appears to make a concerted effort to dodge anything as namby-pamby as theme and character development.

But there’s spectacle, right? Sea monsters and shipwrecks and rollicking high-seas adventure? There is, and if you look closely enough you’ll catch a few great images amid the dizzying jumbles of close-shot, manically edited action. If the intent was to make us feel as if we’re on board a rapidly sinking ship, it was all too effective.