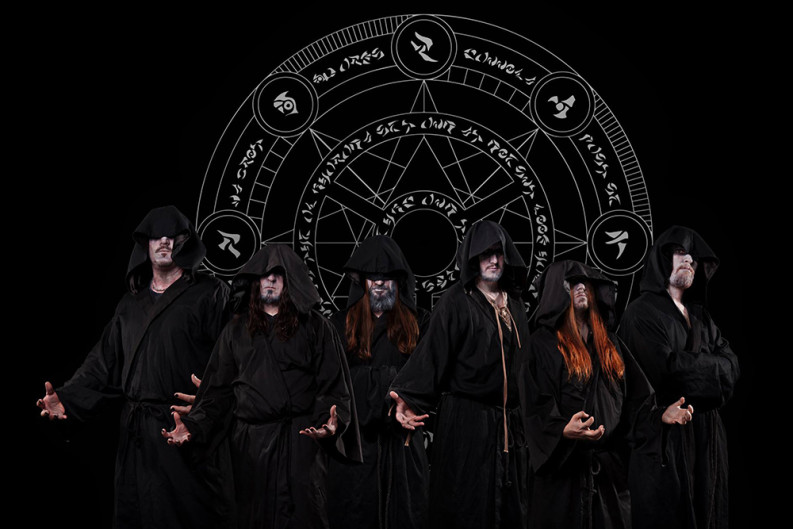 Summoner’s Circle is not like other Knoxville bands, and not just because they play spaced-out heavy rock laced with occult and astrological symbolism borrowed from H.P. Lovecraft, Robert E. Howard, and other pulp writers of the early 20th century. The band’s six members claim to be refugees from a cosmic war on the planet Mercury, intent on completing a series of arcane eldritch rituals—which, when performed, just happen to resemble heavy-metal concerts. Is it a publicity stunt or a postmodern prank? Or have mystical metal aliens really landed in our midst? Guitarist Gog answered some of our questions in a recent email interview.

Tell me about the band—who you are, how you came together, previous experience, what you’re trying to do with this new band?
It is a long and ongoing story. Allow me to summarize to the best of my ability. The Circle was formed by Magog and myself early in the Earth year of 2015 during the calendar term you refer to as February. The war on our home world of Mercury led to the death of our Creator, and we were tasked by our order to gather together all of the old Creator’s spilled blood in order to perform the Rite of Making, which would summon him back into being. Magog and I had grown weary of serving this now deceased god and his order, and decided at this juncture to, yes, collect his blood but, instead, perform the Summoning ourselves and assume the power of the old creator unto ourselves. Mercury is currently in chaos, and it seemed like the most opportune moment to strike out on our own in a quest for ultimate power and vengeance. We are now an alliance of Six. We have assumed earthly avatars and adopted your instruments to assist in creating the incantations necessary to perform the Summoning. The Six are Gog (lead guitar); Magog (rhythm guitar); the Fallen One (bass); Blind (throat and screams); Sol (keyboards and vocals); and B.G. Scios (drums).

Any particular bands you find inspiration from? You seem to draw from classic doom, modern metal, some black metal.
Your observations are quite astute. We have researched doom pioneers on your world such as Black Sabbath, Pentagram, Candlemass, and Draconian, in addition to others such as Opeth and Emperor. Their works, and many others, have greatly contributed to the incantations you can now hear on First Summoning. Each of the Six has studied many varied and distinct artists, and each has brought those together into what is now the core, or essence, of our being.

You guys obviously have a flair for the theatrical. Where does that come from, how does it influence what you do, and what are your ultimate plans? I get the feeling there’s a bigger picture.
That is just part of being when you are a Summoner by trade. One cannot work blood magick and conjure and bind interdimensional beings and not have a flair for the theatric. What is it the kids around here say? This is how we roll? The larger the scale, the more powerful the Summoning. Our Acolytes and Nones (followers and fans) deserve to be treated to more than watching several beings standing there performing incantations. We feed off of the energy, and that energy gives us more power. In turn, it gives them more pleasure and a spectacle to behold. It is a perpetual cycle. When you come witness us performing a Summoning, be prepared to view a spectacle and something that could be deemed over the top.

Who’s the singer, and where did you find him? I imagine it’s pretty hard to find anybody around Knoxville who can (or will) do extreme metal vocals, but you seem to have found a really good one.
That would be Blind. Magog, Fallen, and I were about to be devoured by the Parasite at the base of the White Pyramid when, and I might add in no hurry, he finally decided our lives were worth saving. We knew he had the ancient wisdom we needed to complete the Circle and perform the Summoning, so we were seeking him out, traversing across the blasted deserts on the sun-facing side of Mercury, where no sane being should live. He is, indeed, a very unique and powerful summoner, and we are fortunate that he joined our ranks.

In your live clips, there’s some tongue-in-cheek humor in the presentation, but it’s not apparent in the music. Do you find that’s a tough line to navigate—acknowledging that what you’re doing is over the top but remaining committed to it?
Ah, yes. Blind is quite snarky in his old age. Seeing that which is not supposed to be seen has a way of doing that to a being. He doesn’t get out much, and spends most of his time locked up in the Fortress of Chukar. I surmise he jests for the attention it gets him.

First Summoning sounds top-notch—tell me about writing and recording it. And are there plans for a full-length?
First Summoning was chronicled over a span of several months by Dalton Skinner at Anchor Sound Studios. Each Summoner contributed to the writing of each incantation. The Six are currently in the process of writing material for a full-length tome, which we hope to chronicle during the spring cycle of 2016.

Knoxville’s metal scene seems to be gathering momentum—you guys, stoner bands like Mass Driver and O’Possum, the prog-rock bands, and plenty more. Is anything in particular spurring that?
Most likely the cosmic energies being released by the war on Mercury are fueling this resurgence. Doom, death, and destruction travel swiftly and quietly.