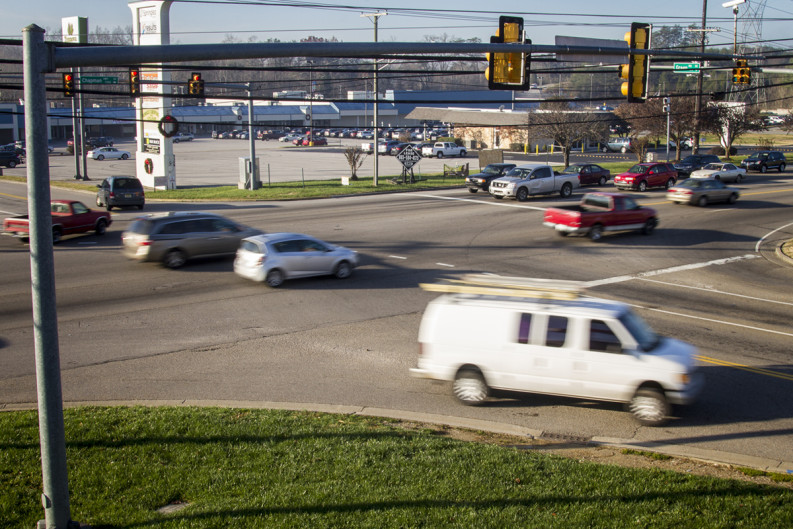 For most folks living and working in South Knoxville, the sights and sounds of automobiles whizzing, screeching, and sometimes colliding on the south side’s busiest thoroughfares is all too familiar. Local residents and transportation officials have long been eyeing some major improvements aimed at increasing capacity and improving safety on Alcoa and Chapman highways. These two expansive boulevards are main funnels for the throngs of commuters who motor to and from Alcoa, Maryville, and Seymour each weekday, and also help deliver drivers to any number of businesses lining those same strips.

One of those highways is now set to begin the construction process for improvements—but it’s not the one that’s seen the highest number of automobile accidents or fatalities.

Over the past 20 years, Allan Miller has had a front-row seat to the growing traffic and issues along both of these roadways. His house is just east of Alcoa Highway, off Maloney Road, and his business, the Disc Exchange, is situated along a bustling stretch of Chapman just south of downtown. He’s seen enough to know that some works needs to be done to both highways. But the biggest challenge to getting these and other transportation projects off the ground is and always has been one thing: funding. This year alone, budget questions forced the postponement of more than 150 infrastructure projects across the state, including some planned improvements to Alcoa Highway. That’s why Miller was happy to hear that the state had cobbled together enough money to forge ahead with some planned improvements along one segment of Alcoa Highway, the stretch between Woodson Drive and Maloney Road—that is, until he ran some numbers of his own.

“There are an amazing amount of accidents on Chapman Highway, especially compared with the same length of Alcoa. You have intersections on Chapman that had 50 to 60 accidents in the past three years, compared with intersections on Alcoa with just one to four accidents during that same time,” he says. “I don’t really understand why TDOT’s limited resources are going into [revamping Alcoa Highway] instead of something else.”

It’s true. Chapman Highway has seen a far higher number of crashes in recent years. From the beginning of 2012 through the end of 2014, the roughly 8-mile length on Chapman Highway stretching from downtown to the county line had nearly triple the number of accidents as the comparable route of Alcoa Highway, according the crash records from the Tennessee Highway Patrol. The most hazardous point may be on Chapman Highway directly in front of Chapman Plaza, near the entrance to Home Depot and Walmart at Green Road, where more than 70 accidents have occurred in a three-year span. The turn-off for Stone Road saw about 57 collisions, and there were nearly 50 accidents near Young High Pike during that same time period.

Alcoa Highway has some problem areas, too. (Miller says he’s also opposed to a planned roundabout on-ramp to connect Maloney Road to Alcoa Highway for more personal reasons—it may force him out of his home.) Alcoa Highway’s intersection with Ginn Drive saw about 46 accidents from 2012 through 2014, by far the largest cluster along that strip, followed by intersections at Woodson Drive with 37 crashes and 31 at Mount Vernon Drive, data shows. But overall it’s far less accident-prone than neighboring Chapman Highway, according to the numbers. In total, there were 968 crashes on Chapman Highway versus 372 on Alcoa Highway from 2012-2014.

A BIG FAT DISCLAIMER: More than 100 accidents recorded by the Tennessee Highway Patrol (which provided us this data in response to an open records request) did not include adequate location information to allow its mapping. To see all of the automobile accidents that police responded to along Alcoa and Chapman highways in Knox County from 2012-2014, download the complete spreadsheet here.

But Tennessee Department of Transportation officials say they’re doing what they can with what they have, and other things besides crash figures factor in and often influence which transportation projects are completed when. The availability of both federal and state funds is a big one, along with acquiring the necessary right-of-way to properties for some projects and clearing federal environmental regulations. TDOT has two safety projects planned for this stretch of Chapman Highway (pending funding) to add center turn lanes from Simpson Road to Hendron Chapel Road and from Evans Road to Burnett Lane. Bidding for those projects is expected in mid-to-late 2017, TDOT spokesman Mark Nagi said in an email.

“The availability of funding plays a large factor in the number and the order of how projects are delivered statewide,” Nagi notes. “This project moved forward in the development process once the Department received approval of the environmental document by the Federal Highway Administration (FHWA) on March 7, 2014.”

Planners and many local residents, including Miller, support needed safety improvements along both Alcoa and Chapman highways. Miller’s concerns center on making the best use of the scant funding available, arguing it could have more of an impact and potentially save more lives put to use on Chapman Highway. From 2012-2014, seven people died in crashes on Chapman and 452 were injured. Two people died in collisions along Alcoa Highway and 138 were injured in the same time frame.

“There’s no question in my mind that these improvements are needed, and unlike some other highways there’s no alternative to making Alcoa a safe regional artery,” says Gene Burr, a Lakemoor Hills resident who has helped the neighborhood’s homeowners’ association advocate for safety improvements to Alcoa Highway.

“Alcoa Highway is the highest volume non-interstate highway in the entire state, and a lot of us have had personal losses—my next-door neighbor was killed at Ginn Drive and Alcoa just a couple of years ago.” 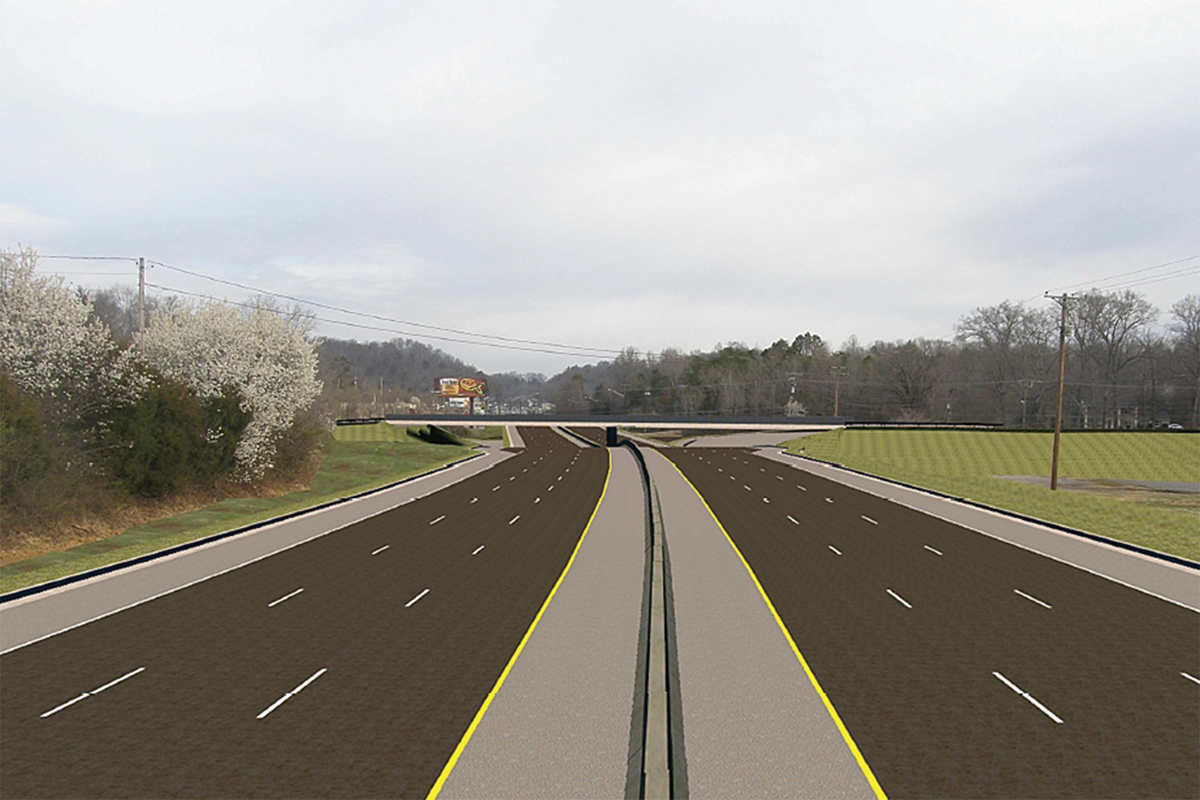 TDOT’s vision is to eventually rework all 12 miles of Alcoa Highway from Interstate 40 in Knoxville south into Blount County. It’s an ambitious project with a hefty price tag—estimated at more than $233 million—that’s been broken down into smaller segments that can be built as funding becomes available. Contractors will likely start work on the $68 million first leg between Woodson Drive and Maloney Road sometime next year. Contract bidding is scheduled for February.

As each segment is completed, Alcoa Highway will, piece-by-piece, start to function more like a real highway and less like a surface street with turnoffs and red lights. Plans call for a concrete median, adding an additional lane of travel in each direction, exit ramps to connect with some surface streets, and a few bridges to route nearby neighborhood roads over the highway, among other improvements. Exact designs for the entire stretch are still developing and have been refined many times over the years. When asked for documents detailing the scope of the work to be complete, TDOT officials said it would take 21 days to research and compile that paperwork, much of which no longer exists in digital format, according to TDOT attorney Sarah McBride.

But promised funding from the FHWA to back many of these projects isn’t as certain. That’s a big reason why work on Alcoa Highway has been parsed out into smaller pieces, although TDOT is continuing to move forward with survey and design work on the other segments so when the money’s there, it’ll be ready. As top state officials noted earlier this year, Congress had not passed a long-term transportation-funding bill in about a decade, raising questions each year about whether money set aside for road projects will still be available when it’s needed. Even after President Barack Obama approved a federal transportation bill earlier this week, top state officials remained cautious about long-term funding prospects, but said it should help. Many major roadway projects take years of planning and construction before completion. Federal dollars are slated to cover 80 percent of the Alcoa Highway work, with the state chipping in the remaining 20 percent. TDOT Commissioner John Schroer has noted before that FHWA’s Federal Highway Trust Fund accounts for about half of his department’s annual budget and more than 90 percent of funding for expansion projects.

On a state tour last month, Gov. Bill Haslam noted that the Tennessee General Assembly has okayed a list of 181 roadway projects, but they lack funding. On that list was Alcoa Highway, which according to the governor likely will not be fully revamped until at least 2034.