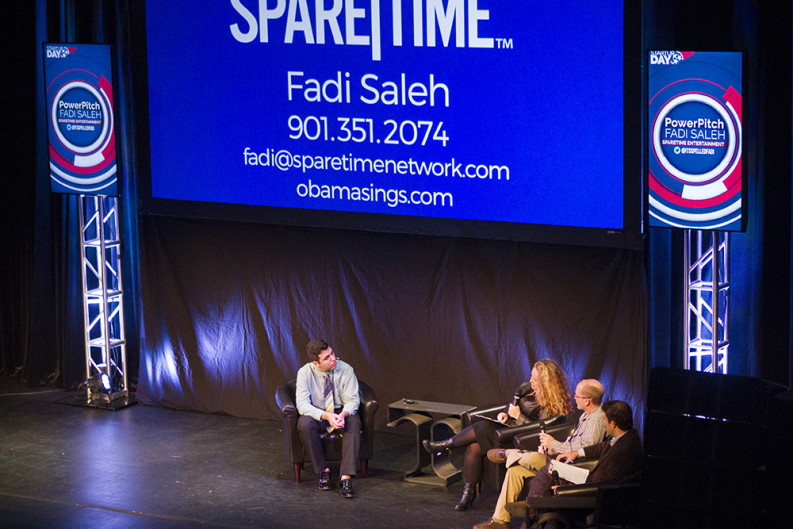 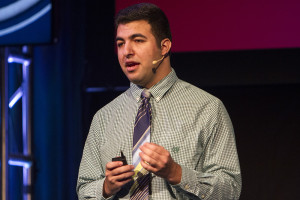 Budding entrepreneur Fadi Saleh, 22, pitches his business plan for SpareTime Entertainment, a startup specializing in viral mashup videos, during a competition at Startup Day 2015 onstage at the Bijou Theatre.

Fadi Saleh quite literally knows what it takes to make Barack Obama sing. Over the past three years, the 22-year-old University of Tennessee student has put the president on the mic for songs ranging from Michael Jackson’s “Thriller to “Popped a Molly” by Trinidad Jame$, and a lot of tracks in between.

No, Saleh doesn’t have connections with the White House. He makes the president sing by seeking out snippets of Obama’s public speeches, which he then slices, dices, and reconfigures to the tune of popular songs. These unique remix videos, published sporadically on Saleh’s BaracksDubs YouTube channel, have racked up more than 140 million views and nearly 1 million subscribers looking forward to future releases. It’s also attracted attention from top music industry professionals and national television producers, leading him to produce custom videos for MTV, Ellen DeGeneres, and the TODAY Show, among others.

“I put out my first video and it got about 100,000 views. Then I came out with Obama singing “Born This Way” (by Lady Gaga) the next week, and within two hours it was already going viral,” Saleh recalls. “After that I thought that whatever video I posted no one would care, but it just kept building. It kept getting crazier and crazier, but I was a college student above everything else, so I just kept doing this whenever I had time.”

Now, on the cusp of graduation, Saleh is taking steps to turn his college hobby into a full-time career by pioneering a startup he hopes will be a catalyst to a larger remix movement, ultimately putting tools in people’s hands to remix content online without them having to spend countless hours thumbing through video segments, compiling clips, and editing like he’s done in the past. That’s the big picture for SpareTime Entertainment at least, but first he’s working to raise enough money to hire some help and increase production for BaracksDubs, ramping up output to at least one video every other week in the run-up to the 2016 presidential elections.

With Obama’s tenure as “leader of the free world” coming to a close, Saleh says he’s going to make more than just the seated president sing, starting with the candidates hoping to fill his seat. Some of his most popular remix videos were produced during the last presidential election cycle in 2012, piggybacking off national trends as Obama faced Mitt Romney in a bid for reelection. (He even has Obama and Romney sing a duet of Katy Perry’s “Hot and Cold.”) He’s hoping to capitalize on the same fervor this round, using it as a springboard to jump-start a larger remix revolution with his company at the forefront. He may change the name of the YouTube channel to better fit future content.

“Over the summer it hit me that BaracksDubs is indicative of a bigger trend, and that’s the fact that people love creating and consuming remix content,” Saleh says. “Our tagline is ‘remix everything,’ and the vision for SpareTime is to create the premiere remix network by creating remixes of our own, but also by enabling our audience base, our community, to remix everything on their own.”

To do that, Saleh says he and his partner, Jared Smith, currently a UT junior, will continue to build on software they’ve already developed that helps identify keywords and search terms within Obama’s speeches, eventually expanding its capabilities to scrape other types of video content online. Known as Optimus, the computer program has already cut BaracksDubs’ video editing time by about 80 percent, he says. In the past it took about 100 hours to complete a single one-minute remix video—the majority of that time going to seeking out video clips online—but with Optimus, that process is down to about 20 hours and continues to accelerate as the software is fine-tuned.

“Optimus is helping us massively grow BaracksDubs, and then, potentially, it fits into an application to allow people to remix other types of videos,” Saleh says. “There still needs to be a lot of features added on for it to become a true remix engine, but at the same time we think Optimus has potential as a solution for production companies, which is something we’re exploring, because a lot of what they do matches this meticulous need to search through (video content) for words.”

SpareTime is currently seeking investors to help underwrite operations as it gets off the ground as a fully-functioning company. Its target is $400,000, which would keep a small staff employed for about 14 months, pay for further development of Optimus, and allow the crew to ramp up production for BaracksDubs, though Saleh says it needs a minimum of $50,000 to get basic operations up and running. Financial projections peg year-one profits at more than $250,000 after expenses, mainly stemming from YouTube advertisement revenue and sponsored content, according to the company’s own figures. Saleh expects that to quadruple in 2017 as the company continues to grow and branch out to other revenue streams.

“BaracksDubs is not a moonshot. This is something that’s been proven over the last three years,” he says. “There are a lot of remix types, and that’s where a YouTube channel becomes repeatable beyond just video-to-video. I want to grow SpareTime into a remix network.”