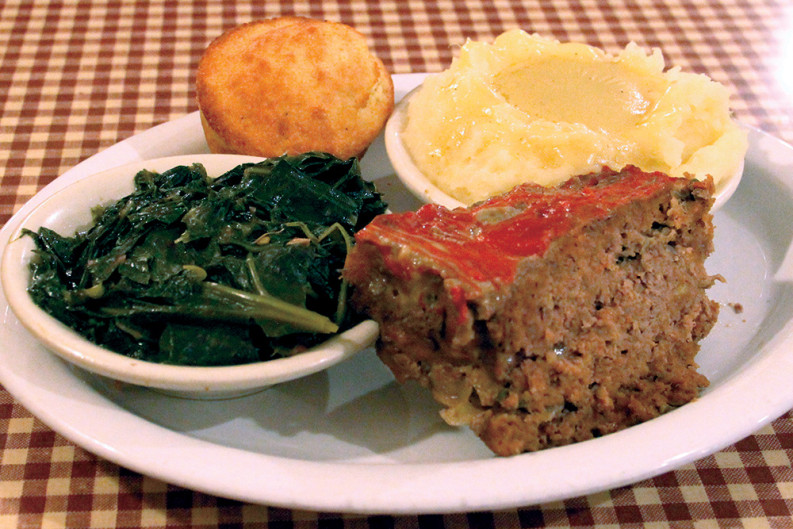 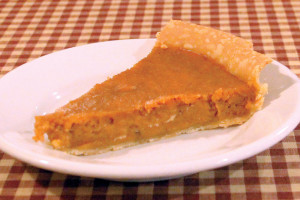 Despite election-cycle verbiage, I believe that it’s still a part of conventional wisdom that some topics are too delicate, personal, and/or incendiary to discuss in polite society; among these are politics, religion, and soul food.

Just you dare to take a public stand on the proper way to fry a chicken, barbecue a pig part, or whether corn bread should be sweet or not, and you’ll find yourself in the hot sauce in a heartbeat. It’s a subject about which personal recollections and regional allegiances are worth fighting for.

That said, I’m not about to tell you that Jackie’s Dream is the paragon of all or any of these disputed foods. But I’m confident it’s a fine place to do some research on the subject.

Located on McCalla Avenue near its intersection with Martin Luther King Boulevard in East Knoxville, Jackie’s Dream resides a low building with small windows that looks more like a shady, old-school beer joint than a good place to stop for lunch or an early dinner. The fence that encloses the parking lot can be a little intimidating. But, as we all know by now, appearances are deceiving. Once inside, the smell of good country cooking dispels any other associations the building might bring and makes you feel at home pretty quickly.

It’s a small place, now cheerfully decorated for Christmas with red and green trappings and bright little lights that make the space feel cozy. As you enter, you’re likely to be greeted by a warm, basso hello that emanates from the kitchen, which is visible through the pass, just to your right. Further along that wall there’s a small counter with a few seats that’s a nice place to sit if you’re dining alone and might like conversation. That’s where I met owner Jackie Booker Griffin on a quiet afternoon before Thanksgiving, when I ought to have been saving my indulgences for the family feast.

This is, in fact, Jackie’s dream—the restaurant is the culmination of over 20 years of experience working in other kitchens from Red Lobster to the Crown & Goose. But there are no oceanic platters or sticky puddings here; the food that Jackie serves up comes straight from home and made from recipes that she learned while cooking with her grandmothers in Oliver Springs. And it’s a cuisine, Jackie says, that assumes that most of the food will be local, preferably from the garden of one family member or another.

“I come from a family that cooks. It’s what my mother, grandmother, and uncles taught me,” she says. “We made our own jelly, chow-chow, pickles. My grandfather had chickens so we had fresh eggs. We hardly ever went to the store. We made everything from scratch, and I continue to do it that way. Everything is peeled, cut, chopped here. We eliminate cans whenever we can—I had fresh green beans and corn all summer long.”

Although the winter brings some concessions to a garden-fresh agenda, Jackie insists on serving the best quality product available to her. It doesn’t take very long to note that Jackie has a strong mothering instinct and that’s how she feeds her guests: just like family.

“We strive very hard to keep it home style, family style. We don’t serve any alcohol. Everybody who comes here, comes back,” Jackie says. “And everybody leaves here with hugs, kisses, just like family. That makes me really happy—that’s what I strive for.”

One of the consequences of restaurants where the food is made fresh daily is that there are inconsistencies, and sometimes availability of a popular item can be an issue. Consider Jackie’s much-loved Honey Bun Cake: It’s a vanilla and cinnamon-laced sheet cake soaked in a glaze that’s apparently addictive—so much so that the cake virtually evaporates as soon as it’s available. I tried three times and missed my deadline in a failed attempt to taste it. The sweet potato pie was an enjoyably dense and spicy substitute, but it too sells out quickly as do Jackie’s fruit cobblers—perhaps you’ll detect a theme.

Likewise there are some little hiccups that come from food cooked with personal feeling instead of corporate guidelines. The meatloaf gets high marks from regulars, and while I enjoyed my serving, there was a good bit of the overcooked end on the plate. Personally I like that part of the loaf, but I’m not sure about everybody else. Even so, the recipe, complete with a line of ketchup baked on top, summoned memories of my own grandmother’s cooking. That’s pretty good seasoning. 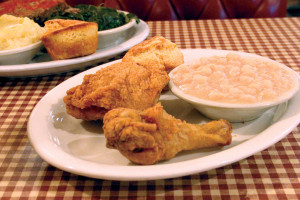 There’s a lot to love, including hearing the words, “George, drop a thigh and a leg,” just after you order fried chicken. There’s no case with a heat lamp to hold the chicken—so sometimes it takes a minute, but it’s time well spent for delicious, freshly hot and crunchy bird. Even hours later after a rest in my refrigerator, the chicken retained its fine texture and, as is often the mark of good fried chicken, tasted even better cold.

The aforementioned George is George Pelcher, chef and the face behind the friendly hello when you enter the restaurant. Like Jackie, he’s been cooking professionally for years. He’s responsible for some of the restaurant’s most popular dishes including the Sunday special, Oxtail Stew. He’s also the author of Jackie’s version of Hot Chicken.

“A customer asked George about it. So he researched it, tweaked some recipes, and put his own twist to it,” Jackie says. “We thought we were running it as a special for one day, but we haven’t been able to take it off the menu.”

Served with white bread, pickles, and two sides, the chicken initially has a sweet and savory flavor with a solid punch of heat that comes at the back of the palate. For me, that heat translated into an immediate head sweat that’s always a good sign—an indicator that the capsicum is well integrated and isn’t likely to burn me for hours on end. Unfortunately, I’m not well acquainted with the warm poultry that is much celebrated in Nashville, so I’m unable to make a comparison; I did find it surprisingly enjoyable despite my own aversion to overly spicy food.

Likewise, I was quite captivated with Pelcher’s take on ribs—they were big, meaty country style cuts, more like chops than ribs. Though Pelcher was reluctant to discuss his method, I did gather that he uses a combination of the grill and the oven to produce these tender monsters. They’re just dabbed with sauce, so, happily, the flavor of the meat and fat take the spotlight.

Jackie’s Dream offers a good selection of sides including most of what you’d expect to see, from fried okra to mac-n-cheese. My favorites are the collards, the white beans, and the pinto beans, too. But their savor wasn’t nearly as rich as it tasted. When I ask Jackie about all the pork I was about to eat, she smiles, saying, “I was raised cooking everything in pork, but since I started the restaurant a lot of people say they don’t eat pork anymore for whatever reason. So I’ve converted to cooking almost everything back there [in the kitchen] with smoked turkey. But I tell everybody if I’m frying cabbage, there’s gonna be bacon in it; if I’m frying corn, there’s gonna be bacon in it.”

Jackie’s Dream draws a diverse crowd, including everyone from well-known local lawyers at midweek lunch to a regular slate of preachers and their flocks on Sunday. The food is good, but the incomparable seasoning of friendly faces and a warm welcome make it all the better. Perhaps you’ll see me there—I’ll be the guy at the counter waiting to jump on the next available piece of Honey Bun Cake.