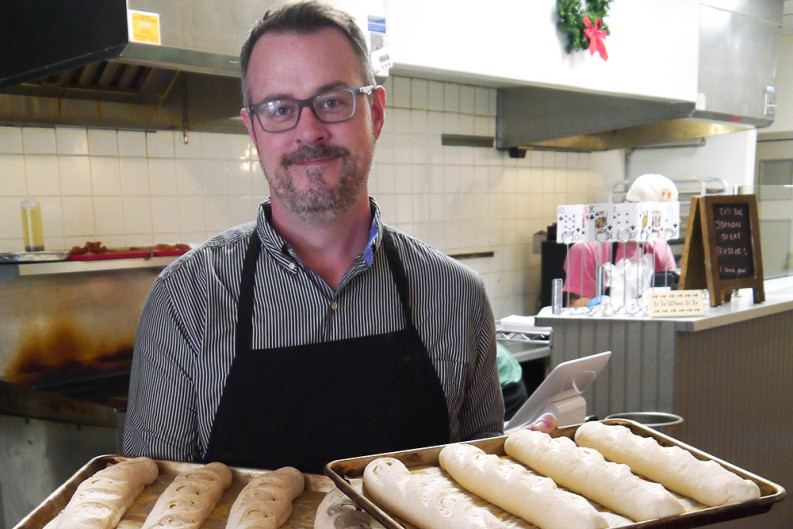 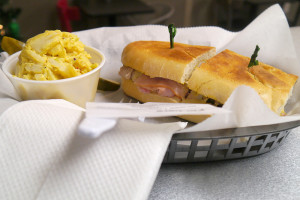 As winner of the first Project BrandAid contest, Frussies Deli and Bakery will soon undergo a $40,000 marketing makeover. It comes at just the right time for owner Jay Brandon.

Four years ago he took on the tricky task of continuing the legacy of fabled South Knoxville sandwich artisan James Dicks, who had closed the longstanding Frussies due to his battle with cancer. Although trained by Dicks himself, Brandon—a graduate of the Institute of Culinary Education in New York City—faced the challenge of wooing back previous customers while also winning over new ones. This year, he moved the restaurant downtown with a new look and a tweaked menu, devoting a large chunk of his resources to refurbishing the building at the corner of Gay Street and Cumberland Avenue, as well as hiring a larger staff. Now he needs to get the word out.

“I’ve gone out to dinner or just around town and people go, ‘What do you do?’ And I’m like, ‘Well, I own Frussies Deli.’ The most common response I get is, ‘Frussies—I’ve never heard of that,’” he says. “So marketing has got to be my biggest challenge. As much as I can do on my own with a Facebook page and Instagram, if you don’t have the capital to plunk down a bunch of cash on newspaper ad or radio ad, it’s really hard to get exposure.”

Frussies was originally located in Gatlinburg before Dicks moved his sandwich shop to an old strip plaza on Moody Avenue in 1996. Dicks became known as a true Knoxville character—demanding of both his sandwiches and his customers, but with a sly, impish sense of humor that revealed itself over repeat visits. His dedication to sandwich making was obsessive. He baked his own breads and roasted his own meats each day at the crack of dawn, and devised his own particular recipes for everything from the turkey Reuben to a crisp cabbage cole slaw. The warm Italian sandwich is perhaps his crowning achievement—a perfectly balanced assemblage crisped French bread, meats (ham, turkey, and Genoa salami) fused together under melted Provolone, and a tart Italian dressing.

Brandon was an early customer to the South Knoxville location, lured in by word of mouth, and soon became a regular. A few years later, he decided to switch careers from hospital work to restaurants, gaining employment at the Regas family’s restaurants where he was encouraged to further his cooking skills. So, in 2001, he moved to New York and graduated from ICE, finding work at the Michelin Guide three-star restaurant, Eleven Madison Park. But whenever he was back in Knoxville, he would be sure to include a trip to Frussies.

“I really and truly believe in my heart of hearts—after living in New York—that James put out the finest sandwich around,” he says. “I would always tell him that when I came in, even when I was going to school in New York and would come down at Christmas break to see family and go to the deli. He’d be like, ‘Have you had any good sandwiches up there?’ I’d say, ‘I had some good sandwiches, but nothing like this.’”

In 2003, Brandon’s career took him back to Knoxville full-time, where he worked for Peerless Steak & Seafood and Copper Cellar, and helped open the short-lived but well remembered Little Star in Bearden. He met his future wife, Courtney, and in 2006 they moved to St. Croix in the U.S. Virgin Islands where Brandon became a pastry chef at a resort. But Knoxville beckoned for their return—Courtney was a few credits short of completing her degree at the University of Tennessee, and they were soon to get married and start a family.

But by then the economy had crashed and executive chef jobs were hard to find. So Brandon dropped out of restaurants altogether to start a landscaping business—but he hadn’t forgotten about Frussies, which Dicks had shuttered as his health declined. They had kept in touch over the years, and Brandon had even convinced Dicks to share (or rather, sell) his potato salad recipe. One day, Brandon brought over a batch, seeking his approval.

“Sitting in his house, we just got to talking about how it was a shame the restaurant had closed and how I wished it was still around and he was healthy,” Brandon says. “He was like, ‘Everything is still down there in the building and you could go lease it.’ I was like, ‘I’ll do it—but you can’t charge me $200 per recipe like you did with the potato salad.’”

Dicks agreed and Brandon would pick him up every day at 5 a.m. for almost two months; they’d go to the restaurant and make one or two things, running through all of his secret recipes. Finally, in November 2011, Brandon was ready to reopen Frussies and bring back the sandwiches that so many customers missed—customers he was banking on to return to the fold.

“The immediate challenge was getting people coming back to the store and believe it was as good as it had been. James emailed all his customers saying, ‘Hey, this guy is doing it right,’ and I figured people would come right back—and it wasn’t the case,” he says. “Some people, including myself, went for the sandwich but also to see James’ antics of the day, and without James, Frussies kind of lost that part of it.”

Nevertheless, the sandwiches are just as delicious they were under Dicks, made to the same exacting standards. Dicks died soon after the reopening. In tribute, Brandon designed an eponymous sandwich. The inspiration for James Dicks’ Favorite came about after a training session at the deli when Brandon asked the chef what his favorite sandwich was.

“He was like, ‘My favorite sandwich is roast beef and Swiss, cold, with mayonnaise and horse radish, lettuce, tomato, onion. But: When people came into the deli and asked me what my favorite sandwich was, I told them it was the pork loin because I could never sell pork loin and I didn’t want to throw it away.’”

Crafty, as ever. The James Dicks’ Favorite is a pork loin sandwich with caramelized onions, Provolone, and horseradish, on French only, and is usually in the top three in sales.

Like the menu, Brandon wants to continue Dicks’ preference to keeping the deli itself simple. The brand is unique enough to inspire thoughts of franchising, but he doesn’t believe Frussies unique qualities can be maintained at more than one location.

“It’s just the amount of time and labor to bake the bread every morning, I don’t see it being easily replicated in multiple locations,” he says. “I just want to keep the one store and mom-and-pop it, have my little corner on Gay Street and hopefully people will come and enjoy a sandwich.”