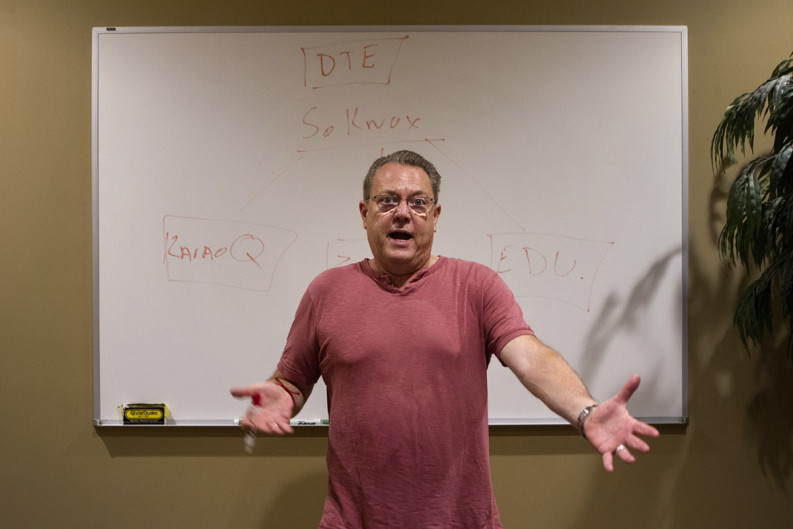 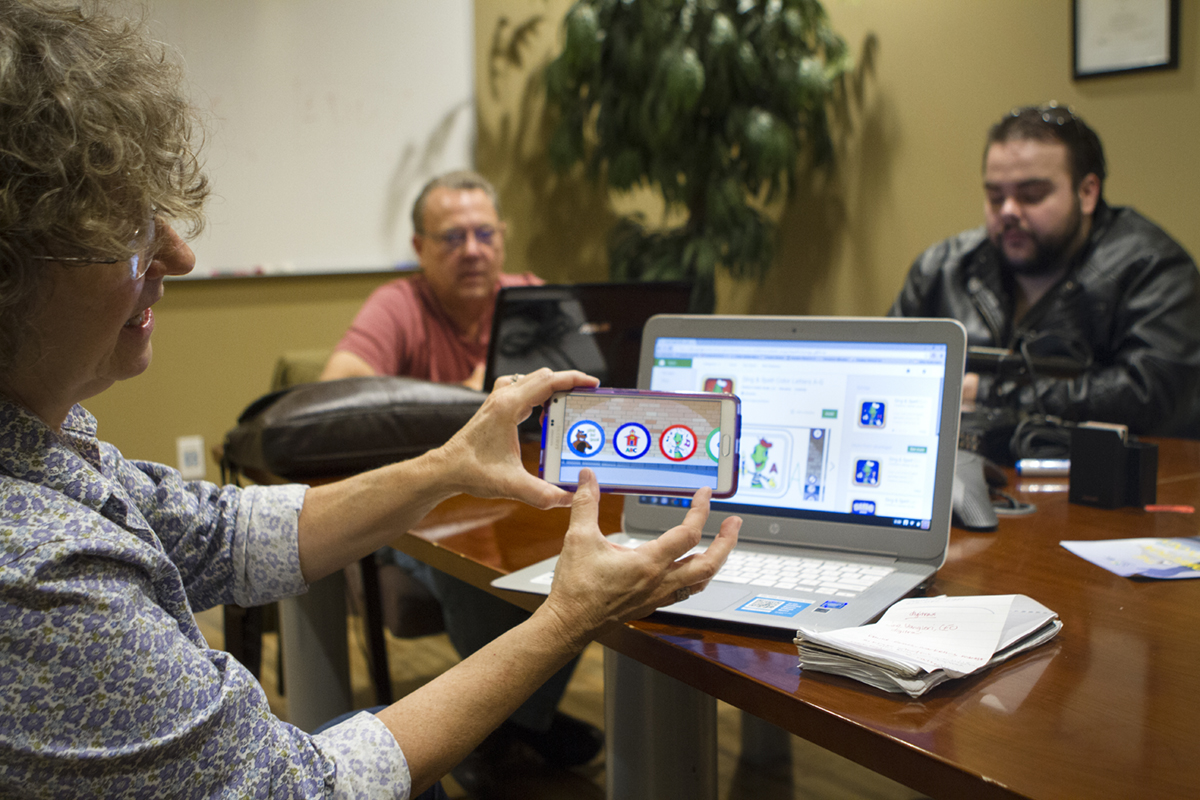 Cathy Vangieri, at left, demos a children’s learning app with all original content and music developed and recently launched by Children’s Media Studio, a division of Digitrax Entertainment.

For the folks at DigiTrax Entertainment in South Knoxville, karaoke isn’t just a passion, it’s an obsession. That’s what it takes to bootstrap and build to the country’s largest online karaoke service, according to founder and CEO Joe Vangieri.

“It really was true grit and determination,” Vangieri recalls. “We started out of a house, and just this past April we were about to move in here (a storefront in South Knoxville off Chapman Highway). We built this place out ourselves.”

DigiTrax rose from the dust of Chartbuster Karaoke, a long-running Knoxville company that went defunct in 2011. Vangieri pulled together about a dozen of its former employees and started up DigiTrax, moving from Clearwater, Fla. with his wife, Cathy, to work for $7 hourly that first year getting things off the ground. But the hard work seems to have paid off.

Today the company employees nearly 20 people here in Knoxville and has ambitions to add as many as 20 more in a Nashville expansion as part of one of its new ventures. At the core of its business is karaokecloud.com, a website that offers both free and paid karaoke tunes, up to 8,000 tracks, that can be streamed straight to a computer, smartphone, or sound system connected to the web for casual karaokers or professional DJs. It also runs SoKnox Studios, a full-service recording studio, out of its offices in South Knoxville.

From that base the company has recently branched out with other ventures in song, dance, and technology, relying on its in-house expertise and karaoke catalog to fuel growth. Children Media Studio, a company under the DigiTrax umbrella helmed by Cathy Vangieri, Joe’s wife, launched earlier this year with a series of Sing and Spell Learning Letters apps for children. Already the apps come preinstalled on about 300,000 kid-oriented tablets available in places like Toys R’ Us, Walmart, and Target, a sort of testing ground Cathy says will allow them to continue to fine-tune their offerings.

“I love using music as a learning tool because for kids, and even for adults, it’s very easy to engage with,” says Cathy, a retired school teacher. “We grew up with things like Schoolhouse Rock, and this is kind of going back to schoolhouse basics. When I was a teacher I could talk with kids and they would say words and sing songs, but they had a hard time making letter sounds, and that was a missing component.”

Sing and Spell aims to help with that. It took more than two years to develop the animated activity apps complete with colorful characters like Eddie Spaghetti, Luke Warmwater, and Al Phabet (the French grasshopper) and an original song composed by Mark Radice (a Knoxvillian and veteran musician of children’s TV shows The Muppet Show and Sesame Street) for each letter of the alphabet. In-app purchases allow for expanded lesson plans, and an online subscription service can beam the playful curriculum to pretty much any device.

“We became very involved with the Knoxville Entrepreneur Center, and that’s really been the best thing we’ve done to bring our product to the market,” Cathy says. “Now we’re tied in with the Launch Tennessee TENN program, a master accelerator program for new companies, out of Nashville.”

Only eight startups in the state were selected for this TENN program, geared as an intensive crash-course for budding entrepreneurs with solid ideas. Sing and Spell was among them, along with fellow Knoxville new-start Innovasan, a company focused on on-site fluid waste disposals for hospitals.

It was through that program that Joe Vangieri linked up with Michael Amburgey, founder of KaraoQ, a company focused on developing technologies to help patrons interact with DJs and venues. Think a smartphone app that lets you select a karaoke tune and join the queue to sing without ever having to leave the bar stool, or download karaoke tunes and lyrics ahead of time, and potentially deliver nightly specials on drinks or food. Don’t want to wait in line? Pay to jump to the front, or digitally transfer the DJ a couple bucks as a tip. KaraoQ pulls in revenue by taking a cut of line-jumping fees, tips, and through sponsorships, Amburgey says.

Couple those features with DigiTrax’ extensive catalog of already licensed karaoke tracks and, well, the partnership was a natural fit.

“Surprisingly enough there has been almost zero innovation for the patron or the performer (when it comes to live karaoke experiences),” Amburgey says. “There has never been something that created a 360-degree solution—until now.”

With DigiTrax on its feet and a team of like-minded entrepreneurs pushing these new ventures, Joe Vangieri says he’s got a pulse on the future. Early reception of both Sing and Spell and KaraoQ has been strong, he says, but next comes a round of funding to help kick things up hard and fast.