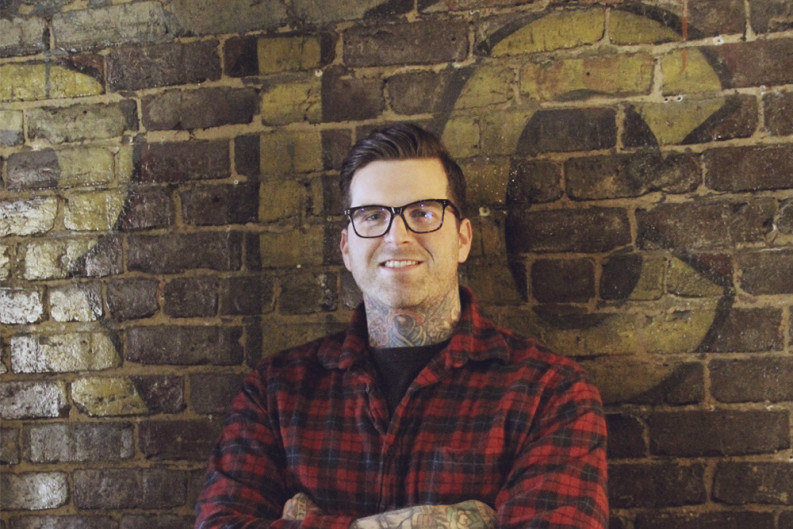 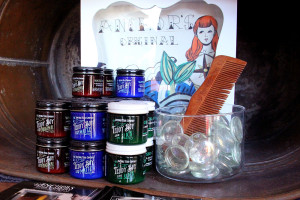 From a tidy workshop tucked inside his North Knoxville rancher, Ben Miller is fomenting a pomade revolution.

Yes, pomade is a thing again. Although a few generations of men once opted instead for the “dry look”—and then later used mousses, gels, and maybe even sprays—proper, old-fashioned pomade is back with a vengeance. It’s a trend that exists beyond the waning charge of the “metrosexual” male, or even the receding reach of Mad Men. Instead, it is a full-on revival spurred by a youthful preoccupation with manly pursuits that never quite went out of style but are experiencing a new-urbanist popularity: café racers, tattoos, hot rods, rockabilly, and, um, facial hair. Lots of facial hair. But also pompadours.

The suddenly crowded pomade marketplace yields products with names like Suavecito, Imperial Barbershop, and Uppercut Deluxe. The packaging often looks vaguely retro-futuristic, as if products from an alternate timeline, with logos and lettering that could hearken to any era between the late 19th century to the 1970s. There is a pomade.com and a pomades.com, each promising artisan-made pomade delivered to your door. Meanwhile, on YouTube, hair-conscious young men are creating channels devoted entirely to pomade reviews, parsing the nuances of hold, volume, and sheen.

Into this hip hair-product arena comes Anchors Hair Company, straight out of Knoxville. The 31-year-old Miller’s flagship product is Teddy Boy Original, named after the post-war dandies of British youth culture. Its small, brown plastic jar promises a semi-gloss pomade “more majestic than a winged snow leopard flying over the Pacific sunset.” And, so far, it’s been delivering.

Since 2014, about 40,000 jars have been shipped out of Miller’s DIY factory to boutiques all over the world: Indonesia, Singapore, Ireland, Mexico, Australia, and more. It’s exclusively sold in about 50 salons and shops in the U.S.; in Knoxville, it can be found at Whole Foods as well as Lox Salon in the Old City. Meanwhile, it’s gotten write-ups in traditional media ranging from British GQ to Alternative Press, and lots of attention from those YouTube pomade reviewers.

“It made a huge uproar and completely changed the pomade game, like completely,” declares one Roger Gillespie in his 13-minute YouTube rave of Teddy Boy Original. “It made everyone else in the pomade game have to really step up to compete.”

The reason why is because Miller has created a water-based pomade utilizing essential oils and natural extracts that actually works as well as a traditional oil-based pomade.

“It’s two totally different formulas, two totally different worlds,” Miller says. Most of the industry makes petroleum-oil based pomade, which provides a stronger hold, but also clogs pores and leaves your head, well, greasy. Water-based products are easier to use and are better for your hair, but may not last as long. Miller has concocted a product that bridges the two factions.

“Oil-based is a lot easier to make, you don’t need as much equipment and you can find DIYs to do it,” he says. “Some companies use straight-up petroleum and they put their own scent in it. I don’t think there’s a lot of integrity in that.”

Instead, Miller went about it the hard way—figuring everything out for himself. His favorite pomades cost about $30, but he wanted something more affordable. So, through a lot of trial and error, he developed his own water-based formula that used natural ingredients to achieve the same hair-holding effects, creating a hand-made pomade that sells for $13.95 per 2.5-ounce bottle.

While he may be self-taught, Miller is also hyper-attentive to detail, creating a one-man operation that, from a consumer’s point of view, looks every bit as professional and polished as a name-brand manufacturer. He wields an array of online entities, all branded with the distinctive anchor logo designed by his wife Erin: a website, YouTube channel, Facebook page, Twitter feed, Instagram, and storefronts on Etsy and Amazon. 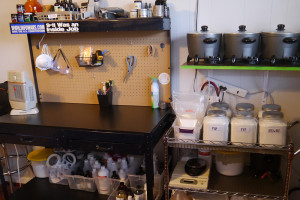 Back at the house, though, Anchors’ products are developed from a small, Spartan work room that consists of a couple of shop tables, boilers to melt down the wax, mixers to combine all the ingredients, and a large pneumatic filling station to pump the product into jars. Once filled, the jars take about 12 hours to cool, after which he slaps on labels and boxes them up for shipping. Miller makes about 1,200 jars at a time; last month, he shipped 4,000 units. He spends a lot of time at the post office.

With his male-model looks and vibrant sleeves of tattoos that stretch from his fingers up to his neck and onto his head, Miller is not your usual cosmetics scientist. How did he become one? It’s a story as colorful as the ink imprinted on his arms.

To start with, his family was not well off. Growing up, his parents worked mostly fast-food jobs and moved him and his late brother Gabe around the country—a lot.

“My dad never really got his crap together, so we would move about every six months,” he says. That includes Florida, Ohio, South Carolina, and Wisconsin—it was there the family went from living in trailers to living in a tent. “I remember being the stinky kid at school,” he says, “not having the nicest shoes, and seeing everyone else have this and that, and you’re wearing your brother’s old ratty clothes.”

The Millers ended up in Tennessee, first Powell, and then to Kodak, and then to Sevierville. When his father finally left the family, his mother, Katie, took a job at a hotel; since she didn’t own a car, she would ride a bicycle to work 13 miles each day, he says. Finally, when he was 15, his mother got remarried to an electrical engineer, John Helms, and the family moved to Knoxville, where Miller attended West High School.

“That’s when structure really came about and I realized that, ‘You know, I kind of like structure,’” he says. “He [his stepfather] was a really hard worker. He would always make sure that he got hard work out of me, too, and my brother. I think that growing up and seeing how hard my parents worked lit a fire under me to work that hard and make those sacrifices. It helps me feel better about my day.”

One of the duties his stepfather expected of him was to help other people, especially those in worse financial straits. “My stepdad would make me drive this big food truck underneath the bridge at Broadway every Saturday morning. You can imagine a high schooler every Saturday morning—I was pretty mad about it. But I would do it—get up and drive the food truck under Broadway and feed the homeless.”

Meanwhile, he and his brother had started a series of Christian punk bands that attained some success, including Minute 61 and the Invocation. Their mother would drive the band to shows at local churches as well as venues in Nashville, St. Louis, and Daytona. They were carried by a few indie labels, too, such as Reborn Records and Rugged Records, but Miller got burned out on the music biz at a relatively young age.

More specifically, after graduating from West High in 2003, he eventually got into the 82nd Airborne Division. He served for over three years, jumping out of airplanes—but also managed to dislocate both of his shoulders in the process and received a medical discharge. He landed in Dallas, doing graphic design while also searching for a career that didn’t necessitate sitting at a desk eight hours a day. He was interested in psychological counseling, which of course drew him to hair.

“I figured hair would be a great way to get into that and have a fun lifestyle—I could have tattoos,” he says. “It’s amazing the stuff people tell their hair stylist, compared to their psychiatrist. So it was mainly being with people, being active.”

He attended the Toni & Guy Hairdressing Academy in Dallas and learned the trade. But when he met his future wife, Erin, he decided to move back to Knoxville to be closer to his mother. On his return, Miller picked up a job at a fast-paced salon in West Knoxville, but soon began experiencing panic attacks.

“I’ve dealt with anxiety before but these were just really bad in the salon. I was thinking maybe this was God’s way of telling me that I shouldn’t be here. I’ve learned how to work through them. I still have them. I think everyone does. But you just tell yourself you’re going to be all right and move on.”

He found the right work environment at Lox, owned by Brynn Gonzalez, as well as encouragement to pursue his ideas for hair products—he’ll be ending his career there at the end of December to focus on Anchors. “I had always been messing with stuff—different formulas—and I would take it there and try it out on my clients. And the clients really started to like it and they would ask me, ‘Where can I buy that stuff?’ Brynn and the crew down there really inspired me to just start making it. So that’s what I did.”

A highly visible tattoo aficionado, Miller loves traditional sailor skin art—hence the Anchors moniker. But the name also represents the idea of anchoring his life, which he hopes this company will help him achieve; three years ago, he and Erin had a son, Oliver, which spurred him into getting serious about Anchors. “I put away all of my childish things and just focused on this one business and my family,” he says.

“I don’t want to be too big,” he says. “It sounds great to have billions of dollars, but I want to keep it in the family, maybe one day have my son help me work on it. And if he wants to do something totally different, then I’ll sell it and help him with whatever he wants to do.”