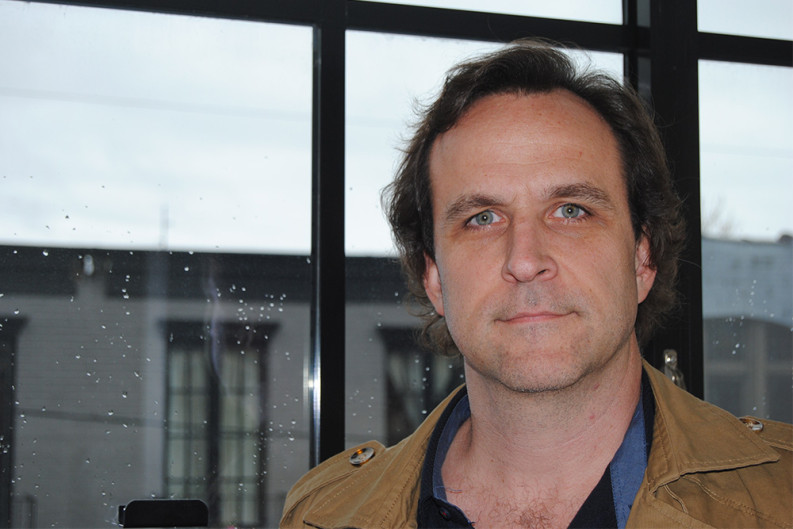 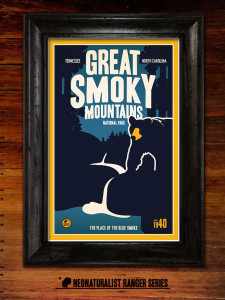 Do you have formal art training?
My BA is actually in theology, and then I have an AS degree in communication graphics. My mother is a full-time artist, and she met my father in art class, so I grew up in that environment. I currently work as a creative director for an ad agency and have a background in art direction.

When did you first fall in love with the parks?
My family spent a lot of time in the outdoors when I was growing up. This is a trend that I have continued in my own adult life. We have a large family and spend a lot of time in nature.

What is your favorite work in the Neonaturalist Ranger series?
Yellowstone.

Which poster came the easiest in the Neonaturalist Ranger series?
Probably Roosevelt National Park. The horse is such an iconic and American image, and the color palette just really came together.

Which was most difficult?
The hardest has been the Grand Tetons—I still haven’t finished it. My biggest point of pride in the series has been the parity and consistency of the posters.

How long does each one take?
That varies quite a bit. I spent several months developing the style and then several more fleshing out the series. Right now I could probably execute a new one in 10 hours or so, but there has been much put into developing the formula.

What does Neonaturalist mean, anyhow?
The series title was an adaptation of the title of the original Depression-era Ranger Naturalist Service Series, which was part of the 1930s New Deal arts project, a legacy the See America Project is campaigning to revive. The title came from my idea to reflect the sensibility of those images while creating something modern.

Do you always work in this same style?
Through the years, I have worked in several art forms including painting, video, and photography. This is the only print series I have done up to this point and each one reflects this particular style.

Do your kids appreciate your posters on some level?
I have seven kids. I bombard them with creative content. They are, for the most part, unimpressed. 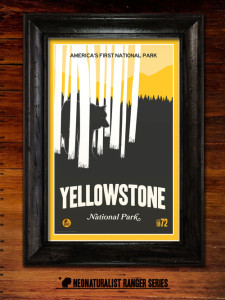 Will this series ever be a money maker for you?
I doubt it will be a significant money maker. The primary way in which the series has been beneficial has been through commissions. I have received several, including a poster for Friends of the Smokies, and I just completed a project for a major national charity. While I love the creative work of designing and producing the prints, it is always difficult for an artist to make a full-time living in this way. So, for now, it serves as a fulfilling hobby.

Did you draw realistically as a kid or just doodle?
I drew a lot as a kid. As realistic as I could. I still doodle all the time.

Do you have a favorite art influence?
For as much as I enjoy creating art, I don’t consume a tremendous amount. And I never had formal training. I have painters who I have always admired. Edward Hopper would be at the top of my list. I’m not sure that I see his influence in my current work though. My brother and I are pretty connected to the art world as of late. We have a series, Making Art, that has received some significant recognition, including a recent pickup by NatGeo. I was instrumental in starting this series, but it’s my brother, Jesse, and my oldest son, Tim, who are the primaries in it now.

Do you have lots of frequent-flyer miles?
We have a 12-passenger “church” van, plastered with bumper stickers from the places we’ve been. With a family of nine, we do a lot of driving. We typically do four or five car and kayak camping trips a year, and more weekends than not we are traveling for day trips to the Smokies, the Obed, Big South Fork, etc. A favorite local spot is Fontana. We try to make it out West once a year as well.

What do you do when you have artist’s block?
I stop. It’s not a huge issue for me. I only work when I am inspired, so if it’s not there it’s not there.

To see examples of the Neonaturalist posters: neonat.squarespace.com; one of Brass’ recent videos about his family’s travels: vimeo.com. Some video blogs he did for HuffPost Travel can be found at brassbrothersfilms.squarespace.com/natural-sense-of-place-films.