Best Cookbooks 2015: Family Recipes, From All Over, for Everyone - The Knoxville Mercury 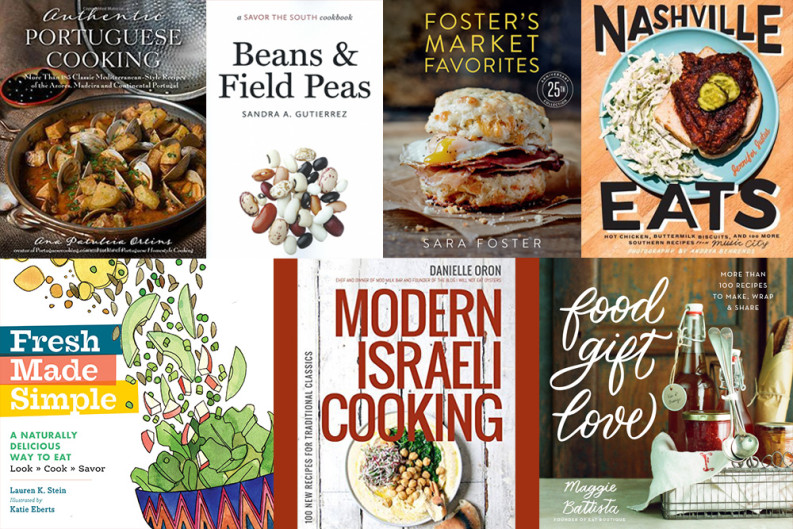 Who is family, and how shall we feed them?

I find that my favorite cookbooks published this year take up that question and answer it with late-night noshes and wooden spoons and casserole dishes and heirloom ingredients.

Maybe it’s just coincidence that so many have published cookbooks emphasizing kitchen-table recipes in 2015, from the The Pioneer Woman Cooks: Dinnertime to Little Big Town country music star Kimberly Schlapman (Oh Gussie!) to superstar chef for the ages Jacques Pepin (Heart & Soul in the Kitchen).

Or perhaps it’s just a need for closeness and sustenance in this cantankerous world, a feeling of carrying on tradition while noodling up new dishes for modern taste buds—maybe that has inspired this outpouring of family-based cookbooks?

I am just glad that they are here, this best of the bunch. They are quite nice to give, or to use to cook for both the biologically related or the friends Edna Buchanan describes as, “The family you choose yourself.”

All emerge from family kitchens, sent as epistles to the other kitchens of the world.

I echo Danielle Oron in her intro to Modern Israeli Cooking, “I will ask only that you invite some friends over and share this food with them.” 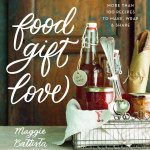 (Houghton, Mifflin, Harcourt)
by Maggie Battista
One of my favorite tags for social media remarks is #iamfailingpinterest, yet I love this gathering of things you can make in the kitchen and give as gifts—way, way past cookies and marmalade. Infused oils, homemade extracts like coffee or coconut, and candied blood orange rinds are just the start of easy ideas, along with a flow chart that helps you decide who gets what and when. Everything in the book is thoughtful but not too exotic—graham cracker toffee here, bourbon-vanilla cherries there. Many are just nifty, “I wish I’d thought of that” things, like apple galettes you can gift without involving a pie pan exchange, and a cucumber-lime pitcher to take as a hostess gift for dinner parties. Though the book is a result of nationwide testing and years of Battista’s food-gift business experience, it’s also got the warm touch of family, from her tale of the pico de gallo with ketchup that makes it to all the events in her extended Latino family to the chocolate-on-the-outside roasted banana bread that her housemates fight over. All anecdotes include recipes! 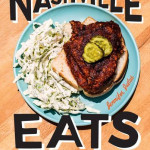 (Stewart, Tabori & Chang)
by Jennifer Justus
The City of Music cooks more like one large, nurturing, adventurous family than a bunch of chefs, and this cookbook celebrates that family history thoroughly. Justus delves into the recipes and personalities that make up chic eateries, meat-and-threes, and even farmer’s markets like she’s unpacking an attic. Here are just a few: Lisa Donovan, who has been a pastry chef at Husk Nashville and tells us, “Tradition is everything for me”—just ahead of her painstaking instructions for a “Meemaw-inspired” Cherry Hand Pie, which she prefers to fried pie. Chef Trey Cioccia of the Farm House shares his RC Cola Baked Ham recipe, just like they made it on the Middle Tennessee Farm where he grew up. And the book’s German potato salad recipe was inspired by the city’s German heritage and the Gerst Haus with its long history in town. Fish and grits, roasted okra, pimiento goat cheese, Atomic Yardbirds Hot Chicken Coleslaw, pickled ramps, a Float Named Sue—well, the names kind of speak for themselves. And Justus doesn’t just provide the recipes, she’s also got a “kitchen playlist” for each section, like Dolly Parton’s “Tennessee Homesick Blues” and “Miss Being Mrs.” by Loretta Lynn. Here’s a squeaky clean plate on your table and a song in your heart. 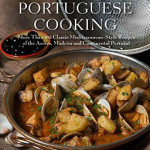 (Page Street)
by Ana Patuleia Ortins
Ortins is dedicated to preserving the little-known cooking traditions of the Azores, Madeira, and Continental Portugal, and does it with warmth and flair. She learned from her father, Rufino, such skills as gutting sardines and cutting kale “fine as grass,” and the precise, delicious old ways live on with her. Each recipe shares a bit of its basis in Portuguese cooking, but just enough to be fascinating. For example, I’ve found myself dwelling with enjoyment on the step-by-step for prepping octopus (ideally with ink sac already removed) for Madeira Wine and Garlic Marinated Octopus Stew, though I know in my heart of hearts I will never prepare such an epic dish. But there are many, many delicious family recipes to make time and again here, like spaghetti squash preserves, King’s Bread replete with brandy and dried fruit for Epiphany Sunday, and Black-Eyed Pea Soup with Beet Greens. The breads, oh the breads. They are delicious, and homey, from sweet raised muffins to carrot fritters to Fried Dough of Graciousa, made more delicious by the thought of young Ana being “taught to always bless the bread dough to ensure that it would rise.” 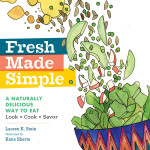 (Storey)
by Lauren K. Stein, illustrated by Katie Eberts
This is just so cool—a quirky, supremely user-friendly how-to for making 75 fresh, good foods. Inspired by Bostonian Stein’s kitchen time with her young daughter, each section takes a simple concept, like “stuffed” or “smooth,” and amplifies it with one-page recipes conveyed in watercolor by Katie Eberts. Eberts also doodles the instructions with lots of neat arrows and tips on individual ingredients like eggs, or mangoes, or pecorino cheese. Before you know it, you are shaking up a honey vinaigrette, sauteeing a goat cheese-red pepper melt, stuffing a fig, or frying plantain. The author suggests leaving it on a coffee table or kitchen counter for daily, decorative inspiration. I say it also works well next to the grocery list—or as a chatty bedtime story for a preschooler. 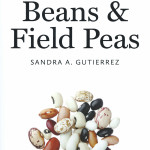 (University of North Carolina Press)
by Sandra A. Gutierrez
A simple but charming elaboration on why these Appalachian and ethnic staples are re-seizing the culinary world in recent years. So worthy a foodstuff—and so tasty, when you know how to cook them. Gutierrez grew up in Latin America and later fell hard for the cuisine of her chosen home, North Carolina, so the recipes are sopped in lore from both places, ebbing and flowing between shellies and pintos, with some arriving at a midpoint she calls “New Southern.” Never mind the name, these are delicious, frugal, and homestyle, from Drunken Beans made with Mexican beer and black bean “sombrero” appetizers to Nancy McDermott’s Soup Bean Pie and a lovely dish of Heirloom Emily Lee Peas. Lots of heritage and old-is-new-again ingredients in here, along with simple old favorites I associate with much earlier decades, say the 1930s to the 1980s. So happy to have a reference book that includes recipes for Southern Caviar, refried pintos, and succotash, all in one place. 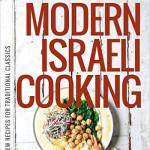 (Page Street Publishing)
by Danielle Oron
I’m a little embarrassed that I didn’t know Israeli cooking was “a thing,” but Oron led me to enlightenment with her definition of what she’s included here, the cuisine you’ll find in Israel today, “including Moroccan, Eastern European, Yemeni, Egyptian, Iraqi, and Turkish.” Her family moved from Tel Aviv to New Jersey when she was 3, so there are lots of melting-pot ideas here in addition to new twists on home-country fare. And lots of midnight snacks and fried eggs and Israeli pickles—and sumac. She is a disciple of the sumac flavor, for sure. She does not talk like I talk—tells people to “grow a pair” if they’re feeling timid about the heat in Harissa Lamb Meatballs, says lots of “Yum,” even a “Zingalicious” or two. But that’s fine with me, because she cooks like I like to eat. Oh man, the Chicken and Bucatini Hammin alone (“so low and so slow”) or the Tahini Swirl Brownies or Moroccan Roasted Carrots or the Slow-Roasted Salmon Platter, after which a Bar Mitzvah brunch will never be the same. One tip: Read the back, “Staples,” first. Because the recipes there lay the groundwork for all that follows, from Amba, a mango chutney condiment, to this seedy spiced crunch mix to Labane, a creamy yogurt layering ingredient. Oh, you could no doubt cook Israeli without any of it, but those last few pages are the key to cooking like Oron. 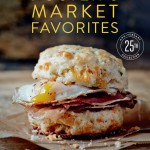 (Story Farm)
by Sara Foster
Where has the time gone? These anniversary favorites feel to me like they just came on the culinary scene, what, last year? We’re talking Beer Can Chicken, panzanella, gluten-free coconut macaroons, and much, much more. A cook both soulful and skilled, Sara Foster grew up in Memphis, cut her culinary teeth in the Big Apple, and has been feeding the close-like-family patrons of Foster’s Market in Durham, N.C. well on 25 years now, along with down-home cooking at, well, her home, with her husband of 31 years and assorted family members. She shows the best possible traces of time spent working for Martha Stewart in the old days—everything tastes wonderful and she never fears starting from scratch or tackling the big stuff. Side of grilled salmon? 20ish Garlic Cloves Chicken? Entirely possible, sure. She also gives out the recipes from the early-days fare that’s still popular at Foster’s, like the mango herb cheddar biscuit they still pack with fried eggs and country ham, or the Almond Butter Sandwich Cookies. I’m a big fan of her approach to meals that will always produce leftovers and descriptions of her “20 recipes and done” Granny Foster, from whom she picked up the joy of one-pot meals. But if you just read a couple of pages of the book, start on page 140 with “10 Sauces That Will Change Your Meal.” Pounded mint chimichurri to avocado crema to red onion and horseradish gremolata—they will, yes they will. 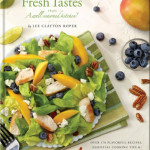 (MLC Publishing)
by Lee Clayton Roper
Roper wrote the first Well Seasoned Kitchen in 2010 to save memories with her aging mother, a powerhouse entertainer, and this is another wonderful peek into her family’s foods. Recipes arrive from all corners—her mom’s bouillabaisse, her Kentuckian maternal grandmother’s buttermilk biscuits, chilled minted pea soup from the Gordon Ranch in Wyoming, or huevos rancheros she first tasted on a girl’s weekend in Cabo San Lucas. Each has easy to follow instructions, and lots of tips that help with ingredients from split peas and country ham to shellfish. These are foods served to friends from the country club and book club, with lots of everyday and Whole Foods store-type ingredients—bacon and brussels sprouts, portobellos and sundried tomatos and capers—and lots of cream cheese. Each recipe, lunch to brunch to snack, seems to say, “since we’re eating together, let’s celebrate, shall we?”