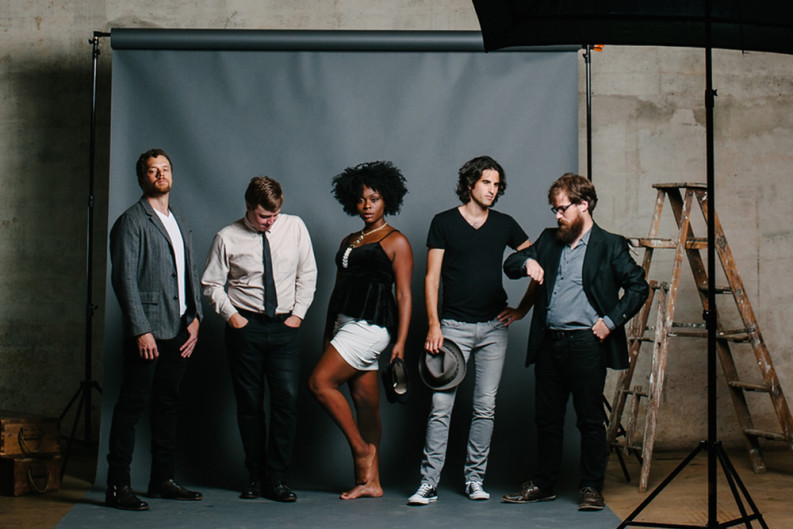 When Kevin Hyfantis hinted he didn’t have to be the lead singer in a new project he was founding with fellow former Dirty Guv’nah Cozmo Holloway, he set the stage for the emergence of Knoxville’s most dynamic new frontwoman.

“Kevin and I had been writing songs together, planning this thing for a month or two,” remembers Holloway, guitarist and cofounder of Electric Darling. “Then one day he kind of indicated, You know, we could get someone else to be the singer. It was just a passing remark. But a light bulb went off in my head. I had just connected with Yas, so I immediately said, let’s bring her in. Kevin and I already had some chemistry going on with our songwriting, and getting Yas only made it stronger.”

Yas would be the irrepressible Yasameen Hoffman-Shahin, a former University of Tennessee vocal performance major who had gigged around town as a sidewoman but never as the full-fledged lead singer of her own band. That changed quickly the night she sat in on her first rehearsal with guitarist Holloway and multi-instrumentalist Hyfantis as part of Electric Darling.

“She killed it,” says Holloway. “The thing about Yas is that she obviously has a great voice. But she’s a performer, not just a singer. Her energy is contagious. She has that cool vibe of a Jill Scott or a Lauryn Hill. The audience feels cool just being around her.”

The genesis of Electric Darling dates back to 2014, when Holloway and Hyfantis began collaborating on songs for a new Dirty Guv’nahs album. When other members of the band decided 2015 would be the Guv’nahs’ last, the duo decided to strike out on their own.

“Our chemistry was good,” Holloway says. “And we wanted to see where it could go.”

Then came Yas. For her part, Hoffman-Shahin says that after years of singing someone else’s music, she relished the chance to take a measure of control, as a full partner with other musicians of stature.

“I finally get to move out front and center, not just be in a support role,” she says. “I get to sing the way I want to sing. And when we’re working on something, it’s really fun to have Cozmo and Kevin turn to me and say, what do you think?”

Holloway describes the band’s earliest efforts—they have four songs posted via Soundcloud—as soul-tinged rock ’n’ roll, though he acknowledges that Electric Darling is still a work in progress.

“We’re predominantly a rock band,” he says. “We tend to have a lot of funk and soul influences in our rhythms, but the chord progressions and melodies are very much rock ’n’ roll. We want to lean toward the rock ’n’ roll side of things because so many people are doing the throwback-soul thing right now.”

The band’s live debut, in July, went over big with a nearly packed house at Scruffy City Hall. Local music-scene regulars knew to expect good things from Holloway and Hyfantis, versatile veteran players with monster chops and plenty of performance savvy. Yet by night’s end, Hoffman-Shahin was the center of attention, holding the audience rapt with her sleek, powerful vocals and brash onstage demeanor.

“For some reason, I feel 10,000 times safer on stage than I do in a one-on-one situation,” Hoffman-Shahin says. “I get  up there and it’s like I step into someone else. I shed my skin, my eyes go blank, and I don’t remember anything that I do afterwards. It’s like there’s something that’s inside me and it has to get out.”

But though Electric Darling may have looked a lot like a band that has been together for years at that stellar premiere, Holloway says the learning curve has been sharp—for Hoffman-Shahin, and for her more experienced bandmates as well.

“Coming from her background to singing for a rock band has required a lot of adjustment,” Holloway says. “She’s finding her own sound, tapping into a part of her voice she didn’t know about before. But she can absorb things very quickly. She takes suggestions, and she makes them her own.”

For himself, Holloway notes that songwriting is still a relatively new frontier—much of his earlier musical experience, in local outfits like Aftah Party and Dishwater Blonde, was as the gonzo sideman, the stunt guitarist who played frenetic leads over someone else’s tunes.

“There was a lot of evolution in my playing with the Guv’nahs, and a lot of it had to do with songwriting and learning to play for the song,” Holloway says. “Being part of a songwriting team is a new thing for me, too. And it excites me, the prospect of turning over those new stones.”

Because the band is still finding its way, Holloway says it will probably be another year or so before Electric Darling commits to recording its first full-length album. “I want to be solidified in our vision, on what our voice is going to be before we do that first album,” he says.

“Of course, you’re always going to evolve, change, and rethink the things you’ve done before. And I think we have some strong stuff in our first batch of songs. But by this time next year, I think we’ll have a much better idea of what the ‘first version’ of Electric Darling will be.”

Electric Darling plays with the Big Pink at Scruffy City Hall (32 Market Square) on Saturday, Dec. 5, at 9 p.m. Admission is $5.