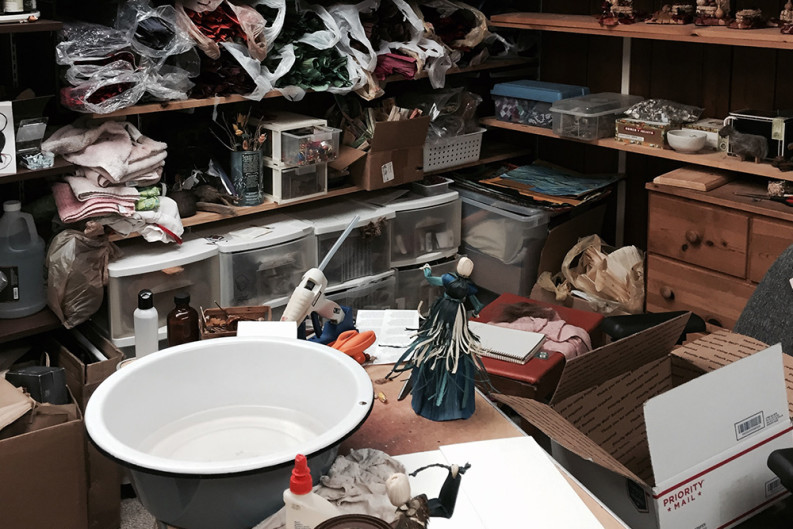 When you walk into the Broadway Studios and Gallery to check out an exhibit, you might encounter something unpredictable, something more than paintings hanging on a wall—like a person slathered in glue paste making paper-mâché. Or painting. Or sorting through corn husks.

The brainchild of artist Jessica Gregory, the collective of 10 artists launched in September in the Wright Place on North Broadway. It is a group that likes to demystify art by allowing visitors to wander through the studios four days of every week while the creativity is flowing. And on First Fridays, the individual studios all serve as exhibit space for the photographers, printmakers, sculptors, painters, and fine crafters who make up the group. An additional hallway gallery features work by outside artists—this month, selectively colored still-life photos by Sharon Popek.

On a recent Thursday, photographer Morris Brady hunched at his computer, with his infrared-mirror photos of trees shot in Old Gray Cemetery and the Maple Grove Cemetery on Westland Drive hanging above his work station. He says many people see images among the crossed branches in the photos—like a Rorschach test—and immediately I do, too: a dragon or praying mantis staring out head-on from beneath cathedral spires.

Out in the hall, BeBe the white-gold English lab gently thumps her tail on the floor in welcome. “She’s the only pedigree in here,” says her owner, Anne Freels, who makes dancing corn-shuck dolls and natural soaps. Her studio is a hodgepodge of tactile supplies, with plastic grocery bags full of brightly colored shucks, baskets of tiny dried gourds, and a fancy trash can full of peacock feathers.

Brady’s friend and studio partner, Cynthia Tipton, a painter and printmaker, says she enjoys having visitors while she works.

“I like people to ask me questions,” she says. “I think it goes back to the dialogue—there’s a dialogue amongst artists that I think is important, but I think dialogue with the public is important. People don’t get the chance to ask, or feel intimidated. The best thing that could come out of that for me is that people would feel less intimidated. I think people should bring their kids.”

Continuing its theme of accessibility, the gallery will hold an open-call show four times a year, with an entry fee of just $5. These will feature both established artists and those brand new to the scene, Gregory says. The first show, held in September, was themed around “gaudy gold frames.” (One of Gregory’s favorite pieces was a frame covered with spangled plastic dinosaurs.) The gallery has issued its second open call, for a show with a food theme that will debut on First Friday in December. “Feast Your Eyes on This” will incorporate a food drive for the Love Kitchen, Freels says, and Gregory hopes to have food trucks and local food touches like displays by a North Knoxville jelly maker.

The collective evolved after Gregory decided she wanted to have a studio for the first time instead of working out of her home. She fell in love with the Wright building but didn’t need the whole space, so she started looking for other artists to rent individual studios. They all chipped in to overhaul their own spaces, mostly through their own sweat over the summer and with funding from a group rummage sale. Hunkering down to build the studios and gallery together built a camaraderie.

While their artistic visions and preferred media are eclectic, the artists at Broadway Studios support each other creatively and hold weekly brainstorming and planning sessions together. Like Gregory, many chose art as a second career and have never had their own studio outside their home. Gregory used to paint houses and drum in the band Stump Tucker until a shoulder injury drove her to switch gears. Tipton was a graphic designer at a TV station. The second to join the collective, Patricia Muncey is a retired Central High School English teacher who now makes quilts and jewelry and paints in her studio.

“I like having my own space and interacting with other artists,” she says. “Everybody has ideas they contribute and different experience.”

Gregory’s studio pops with bright swirls of color. The last few of her series of drummer portraits stenciled on drum heads hang near a statue of a woman mosaicked with shells. Recycling is a major element of Gregory’s art, with cereal boxes and bottles incorporated into the forms of her paper-mâché animal sculptures.

Because the Knoxville Arts and Fine Crafts Center is next door in the same building, the new gallery helps provide two art destinations in one spot. “It’s great because we don’t have kilns, for example, but they do, and artists go right there for classes,” Gregory says. In fact, the director at the center approached the Broadway Studios artists about teaching, and Gregory recently held her first class on making papier-mâché animals.

Tipton plans to offer drawing classes with critiques “because we don’t have a dialogue about arts in this town.” In addition, she and Brady are almost ready to offer archival giclée printing services geared toward fine artists who want to print greeting cards and other products.

Gregory and Tipton are both enthusiastic about the North Knoxville location. “I feel like more artists are up and coming from that area, more energy is being put into that area, so I wanted to be a part of that, too,” Tipton says.