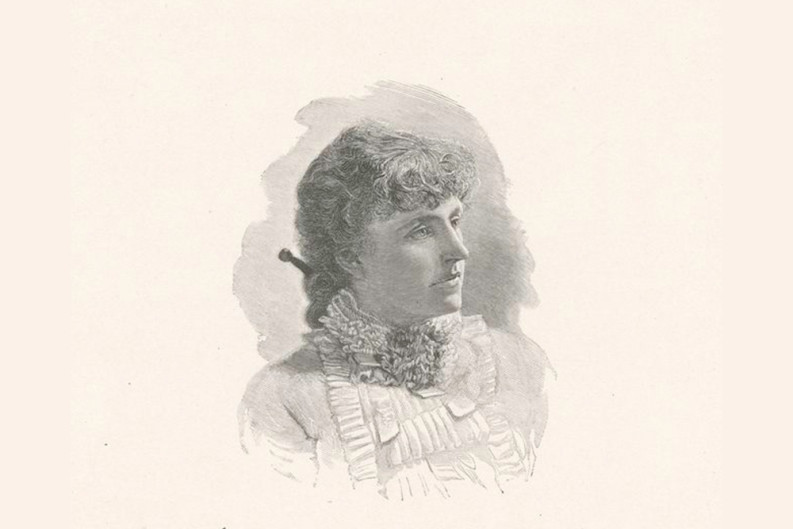 Frances Hodgson Burnett is often considered a British writer. However, she began her professional writing career when she lived in Knoxville.

Her name is known around the world. Her books, several of them still in print, have inspired more than 50 movies and TV series. Earlier generations remembered her for an internationally popular novel called Little Lord Fauntleroy. However, today her best-known novel is The Secret Garden, which has been made into several motion pictures. Another of her novels, A Little Princess (also known as Sarah Crewe) became a popular movie, too, nominated for two Academy Awards in 1996.

Originally known as Fannie Hodgson, she spent her childhood in Manchester, England. After her father’s death, the family was poor. As soon as the Civil War ended, her mother’s brother, William Boond, who had a successful dry-goods store on Gay Street, invited them to Tennessee.

For a year the family lived in New Market, about 25 miles east of Knoxville, in a log cabin that reminded young Fannie of the novels of James Fenimore Cooper.

In 1866, they moved closer to Knoxville. They lived in a rural area on what was then called Clinton Pike, in a little house in the woods on top of a steep hill. They thought the house looked like Noah’s Ark, stranded on top of Mount Ararat, and that’s what they called it. Young Fannie loved the place, and explored the woods. With the help of her brothers, she cleared an area in the woods behind Noah’s Ark that she called the Bower, where she spent many hours alone, reading, writing, and learning about nature. Her home in England, the industrial city of Manchester, had very little wildlife that she could see. Here she found out about bluebirds and rabbits. She didn’t know that some leaves changed colors in the fall until she moved to Tennessee.

She gathered wild grapes to sell on Market Square, to make money to buy foolscap, a kind of writing paper, and postage stamps to send her first stories to magazine publishers. In 1868, when she was just 18, she sold her first short story to Godey’s Lady’s Book.

The Hodgsons moved downtown, near the river, near what’s now Henley Street, in 1868, and lived in a larger house they called Vagabondia Castle. When she was 20, her mother died, leaving Frances and her brothers and sisters alone. They had several friends who came to the house and often played music together. Her older brother Herbert worked as a watchmaker and started a band, Hodgson’s Orchestra, which was popular at Knoxville balls and political events. Her brother John worked as a bartender at the Lamar House, in the same space now occupied by the Bistro at the Bijou.

In 1873, Frances married Dr. Swan Burnett, who was from New Market. They lived in a house on Temperance Hill, near where Green Magnet Academy is today, and started a family. One of her first novels, called Vagabondia, was set in London but based on people she knew at Vagabondia Castle.

The Burnetts settled in Washington, D.C., and by the 1880s, she was famous.  In 1885, she finished Little Lord Fauntleroy, based on her own precocious son Vivian Burnett. He later returned the favor by writing a book about his mother, The Romantick Lady (1927), which details their life in Tennessee.

Set around the time of the Civil War, her now-obscure novel In Connection With the De Willoughby Claim (1899) is a lightly satirical story about American morals and manners, and includes a brief description of Knoxville, which she called “Delisleville.” It’s one of several novels she wrote that were aimed at an adult market.

A dreamlike memoir called The One I Knew the Best of All (1893), describes her youth in Manchester, New Market, and Knoxville. Even though she doesn’t use actual place names for the Tennessee locations, they’re vividly described. Long hard to find, the book is newly available in a reprint edition.

This week, Knoxville, New Market, and Jefferson City hosted a visit from the author’s great-granddaughter, Penny Deupree, and several other family members. Ms. Deupree is speaking at the East Tennessee History Center’s Brown Bag Lecture at noon this Thursday, the 19th. The event commemorates the 150th anniversary of the Hodgson family’s arrival in East Tennessee, but it almost coincides with Burnett’s 166th birthday, Nov. 24, which is next Tuesday.