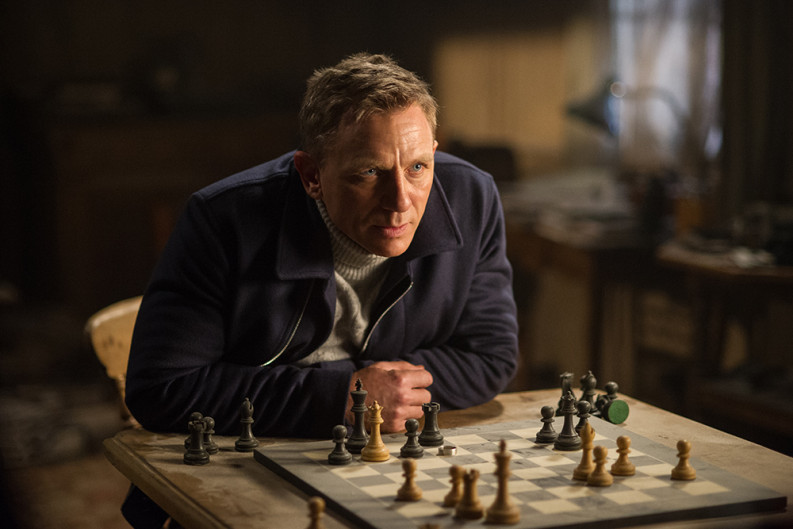 In his fourth and perhaps final outing as the world’s most oversexed spy, Daniel Craig seems all brooded out. After putting 007 through the emotional wringer in the surprisingly affecting Skyfall, Spectre lets him off the hook a little—the tone is lighter, the plot is sillier, and the one-liners fly like rounds from a Walther PPK.

The fact that so many of those quips miss their mark is indicative of Spectre’s biggest problem: Its script is a messy, scattershot affair that makes plenty of room for director Sam Mendes to stage thrilling, jaw-dropping set pieces but makes too many clumsy attempts to tie together Craig’s three previous Bond entries. Spectre wrings every possible bit of spectacle from its expensive, globe-trotting action scenes, even as it squanders some of its most valuable resources—Monica Bellucci, for instance, is woefully underused as an assassin’s not-so-grieving widow, as is Léa Seydoux as a punchy new Bond woman. Poor Christoph Waltz barely gets to chew any scenery at all as Spectre’s much-anticipated supervillain.

It’s still a fun Bond movie, even if it’s not a great one. Spectre kicks off with some truly virtuoso moviemaking: an elaborate tracking shot that follows a debonair, skeleton-masked couple through the dusty throngs of a Mexico City Day of the Dead celebration. Before the title appears, Bond and his target have destroyed much of a city block and engaged in gravity-defying fisticuffs aboard a tumbling, twirling helicopter.

From there, it’s back to London, where a smarmy bureaucrat known as C (Andrew Scott) is engineering a plan to copy the plan engineered in Captain America: Winter Soldier—something about a worldwide surveillance network that will make the 00 program obsolete. While Bond darts around the globe tracking a terrorist organization known as Spectre, his compatriots at MI6, including M (Ralph Fiennes), Q (Ben Whishaw), and Moneypenny (Naomie Harris), are busy trying to thwart C’s attempts to get his new global spying machine online.

There were nearly as many people trying to get Spectre’s script into shape. Skyfall writers Neal Purvis, Robert Wade, and John Logan are back, joined by English playwright Jez Butterworth, but their efforts were apparently focused on retconning several decades of Bond mythology in a puzzling attempt to turn the last four films into one, giant story arc—and, in turn, to tie that arc into the franchise’s earlier installments.

The plot, then, is an episodic mishmash of clumsy revelations that make little sense. The movie seems to think the identity of Waltz’s shadowy villain is a secret, so I won’t divulge it here—needless to say, it’s a character who doesn’t need an ounce of the squishy backstory that Spectre forces upon him.

If it all feels empty compared to Skyfall, well, how could it not? Spectre makes good on its title, as it’s necessarily a phantom of its most immediate predecessor. Bond’s adventures have glitz and flash in spades, but emotional capital is harder to come by. After killing off a beloved character and sketching out as much of a backstory as Bond will ever need, there was nowhere to go but a soft reset, and Spectre offers that. From its opening credits sequence, which juxtaposes guns, naked women, and a CG octopus in some delightfully sleazy ways, it’s clear that the cabal behind the Bond franchise means to return the series to its pulpy roots.

Skyfall, awash in sinister atmosphere and absolutely compelling, was a masterpiece, and it’s hard to imagine it will be anything but the defining film of Craig’s Bond stint—especially if Spectre does turn out to be his last. But even though Craig has indicated that gory suicide would be preferable to spending any more time straightening Bond’s cufflinks, Spectre makes it hard to imagine that he won’t be back for one more turn in the tux. υ