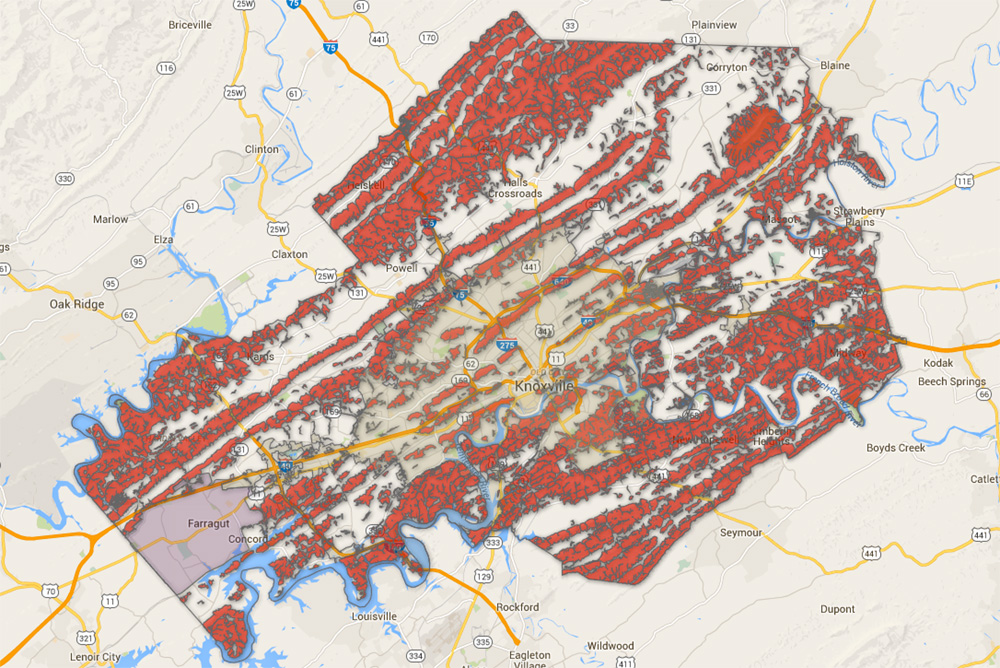 Some 33 percent of all land in Knox County, Tennessee fall under the Hillside and Ridgetop Protection Area (colored red on the map), or HRPA, a specific designation identifying property that may be subject to development guidelines for steep-sloping areas. That is, property with more than a 15 percent slope, or land that rises more than 15 feet over a 100-foot span.

A roughly 30-person task force worked for three years, from 2008 to 2011, to develop guidelines for building on mountainous properties in the city of Knoxville and Knox County, then bundled them in a document that came to be known as the Hillside and Ridgetop Protection Plan, or HRPP. Both the Knoxville City Council and Knox County Commission adopted the HRPP, and thus established the HRPA, in 2011 and 2012, respectively, although Knox County included one big caveat. At the insistence of then-county commissioner Richard Briggs (now a state senator), an amendment was added that gutted much of its legal and regulatory authority. The preface clearly states that the document is solely “advisory in nature” and constitutes “non-binding recommendations” that may be considered for future developments on steep slopes, meaning the county can use it, or not, for future construction projects and rezones.

Today, depending on where you are in the county, those development guidelines hold different weight, and they’re routinely overruled, discarded, or not cited at all, an analysis of public records has shown. Read a detailed analysis of how those standards were developed, why they were never fully implemented, and how they’ve been put to use over the past four years. View a full-sized map of the HRPA by clicking here.

COVER: How Knox’s Controversial Ridgetop Guidelines Are Put to Use—And When They’re Not