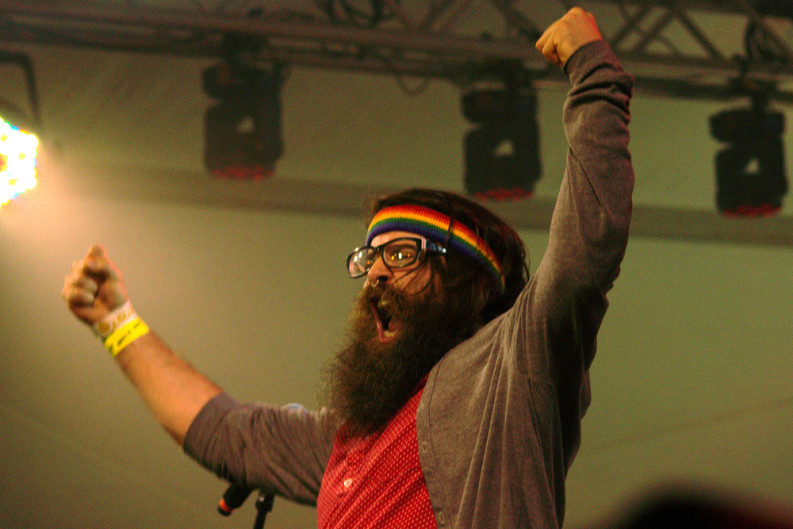 New Orleans’ Chris Trew is a performer of rare talent and singular versatility: a comedian and comedic instructor versed in stand-up and improv alike; a professional wrestler/hype man/wrestling manager; a podcast host and weekly sports columnist; and a hip-hop artist with three full-length albums to his credit.

But all of that will be right out the window come Nov. 13, when Trew will use his appearance at the Scruffy City Comedy Festival in Scruffy City Hall for the sole purpose of encouraging Knoxvillians to make rank fools of themselves by air-f@#$ing in front of a hundred or so of their closest friends.

Because in addition to all of those other things he does, like being the co-founder of his very own Crescent City-based “comedy conservatory,” the New Movement, Trew is also the depraved father of the Air Sex World Championships, a combination comedy tour and competition wherein participants in each city on the ASWC itinerary perform simulated sex acts onstage, all in the name of public humiliation and winning a few debased and meaningless prizes.

“It was supposed to be a one-off,” says Trew during a recent phone interview, remembering his first ASWC event some nine years back. “It was going to be a parody of air-guitar contests, held on a Valentine’s Day. I got the idea from a pretty sad version of the same thing that someone held in Japan.

“We did it up with all the drama and hyper-ness of a pro wrestling show. And it turned out to be a ton of fun—we haven’t stopped since. It’s all about getting up on stage and making love to nothing at all.”

Trew’s is truly a fertile and ingenious comic mind. He’s been credited with helping build the contemporary New Orleans comedy scene from the ground up, having started the aforementioned New Movement, a comedy school and theater with a range of performance and writing classes, with fellow comedian Tami Nelson.

And when he talks about his conservatory and his craft, he speaks with the palpable sincerity and digressive passion of a committed artist. “The New Movement is something I wish I had when I was starting out,” says Trew, who got into stand-up as a student at Louisiana State University. “It’s a way for people to be able to get on stage easily and focus on their work. You can get training without worrying about all the stuff that might otherwise slow you down.”

So given Trew’s ambitious yet cerebral approach to art and performance, what’s the appeal of promoting something as unabashedly weird and socially unacceptable as public air sex?

“I just happen to love it,” Trew says with a laugh. “I love how it brings people out of their shells. And I love that it gives them a forum to express themselves sexually, with other people, but in a safe place.

Trew says the ASWC is his center-stage endeavor right now, but that isn’t to say it’s the only thing he has brewing. He and Nelson have opened another New Movement Theater in Austin, Texas, and he’s an active participant as both a manager and occasional in-ring performer in the New Orleans professional wrestling scene. He’s also got a quasi-legitimate music career on hold—he’s released three records (The Freshest Dude, My Wiener Touches the Ceiling, and Half Man Half Beard) under the “rap handle” Terp2it.

“I started dabbling in stand-up around ’99 or 2000, and I quickly realized that doing the things I wanted to do was the way to go,” Trew says, assessing the weird and unwieldy trajectory of his career. “I became a fan of those artists who created their own path.

“And every new thing I tried, it opened a new door. So I embraced every door as it opened. I got better and better at multi-tasking. And I realized that the more I have to do, the happier I am.”

Chris Trew performs this weekend at the Scruffy City Comedy Festival, which will be held at Scruffy City Hall and Preservation Pub from Friday, Nov. 13-Sunday, Nov. 15. Tickets are $15-$40. Visit scruffycitycomedy.com for more information.