All Vol: A Gallery of UT Football Legends by Will Johnson - The Knoxville Mercury 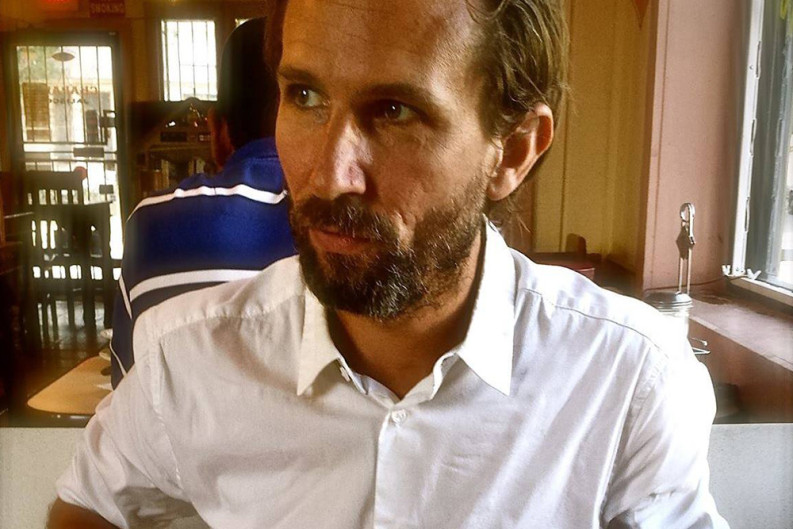 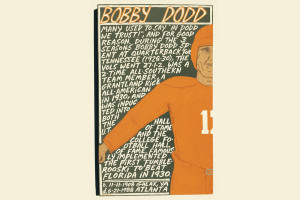 Staubach, Swann, Bradshaw. Kennett, Mo: Those were the jerseys the guys wore in this late-’70s full-tackle sandlot pickup game.

But one kid had an orange #6, Jimmy Streater, and a homemade power T helmet, both gifts from his dad, Roehl Johnson, a University of Tennessee alumnus.

“I wore that jersey so thin that we had to replace it a couple years later,” Will Johnson remembers.

They went to the 1978 Liberty Bowl, father and son. They drove to Memphis, “the only town of significant culture for those of us from across the river,” Johnson says. :It was a frustrating loss to Mississippi State. The mood was somber, and the car savage and foul, all the way home.”

The same pair will travel to a Vol game again this weekend, when the University of Tennessee faces North Texas. And Will, the unlikely lifetime Vol fan, will be bringing an art show with him.

The subject is All Vols: Knox County Warriors. He will hang it at Pioneer House on Thursday. The opening is Friday; the works stay there through the end of the year.

It is a tribute, acrylics of various Vols from years past, each painted in what might best be described as folk realism with snippets of love-song lyrics printed along the side. The Condredge Holloway notes his reputation as “artful dodger,” for example, the “picture of grace, courage, speed, agility.”

They are a little from the Howard Finster school of free-flowing stream of consciousness, but more direct, more contemporary. And they are not precisely Will’s usual thing.

“I’ve always painted baseball players, so painting this collection of football players was a new thing for me,” he says. “Part of the fun was getting a better perspective of the Vols great uniform history.” 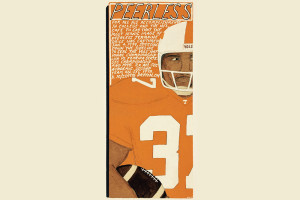 The work “Bad News” does indeed feature George Cafego in ’30s padding and earflap orange helmet; Peerless Price appears in ’90s garb; Johnny Majors shows up in his helmet from 1955, alongside the legend, “He did it all and did it well.”

Inky Johnson, Peyton Manning, Robert Neyland—those are a few of the others, but no one was assured of a place on Will’s roster. “There are some legends missing here and there, and I accepted that possibility from the start,” he says. “There are many, and I figure that’s a good problem for a football program to have. I didn’t sweat a strict to-do list but instead went with whatever player happened to inspire or intrigue me at the time the paints were out.”

Will has worked jobs on a farm, in maintenance and janitorial work, in comic-book distribution, in a record store, in restaurants, teaching kids, delivering cars, renting out tuxedos, transporting equipment, making sandwiches, and cleaning up radioactive and mercury-contaminated waste. Since 2002, he’s paid his bills working as a musician, fronting the bands Centro-Matic and South San Gabriel and playing with the Monsters of Folk and New Multitudes as well as solo. “The touring has taken me around the U.S. and Europe a lot for more than half my life, and I’ve been lucky for that,” he says.

The art began in earnest some seven years ago. “I started with some spare acrylic paints and scraps of MDF board. It was a way to decorate the walls of the spartan apartment I’d moved into at the time, and a way to pay tribute to some of the sports heroes I’ve loved,” he says. “Working with acrylic felt lower risk in case I just wrecked a piece. And I’ve gotten used to the movement of it on a brush I guess.”

The Knox County Warriors are rendered in a “very beautiful and specific orange, obviously,” that took some work to get where he wanted it.

Ten years ago, he gave the first piece he ever painted to his dad for his birthday. It was inspired by that 1978 Liberty Bowl and depicts a Mississippi State player being tackled by a number of Vols.

“A bitter cold swept in as the sun set, and I got sick on the way home,” he remembers. “I thought it was the Wendy’s, but years later I considered the plausible scenario that it might have been my first true taste of internalized, spectator heartbreak.”

Things looked up later, though. “In the coming years my dad continued to turn me on to the magnitude of Tennessee football, kindly taking me back to the Liberty Bowl when the Vols would come west for the occasional home-away-from-home game. Thanks to him I got to see Reggie White, Willie Gault, and Bill Bates play at the height of their college careers.”

Looking back, that first gift painting doesn’t seem particularly good, “but I feel like my father appreciated it, at least. I made him a slightly better painting last year; a Whitey Herzog piece.”

This trip could inspire a Neyland painting. “I’d love to do a Neyland piece at some point,” Johnson says. “Though so far, as stadiums go, I’ve only painted baseball parks.”

The trip might inspire a song lyric, too. Johnson has written more than 1,000 by now. “Various sports metaphors have crept into the lyrics over the years, especially early on. No Tennessee-related lyrics, though I need to get Jimmy Streater into a lyric at some point. He was my first favorite Vol.”

“Rocky Top”? He’s not sung it on stage or video, and has no plans for that.

“But I can sing it. I suspect I will belt it at the game.”