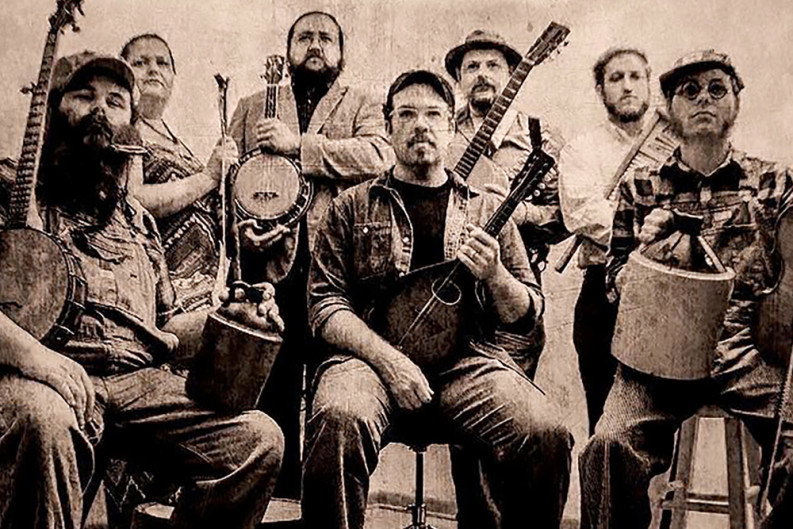 In 1964, not long before they formed the Grateful Dead, Jerry Garcia, Bob Weir, and Ron “Pigpen” McKernan were part of a Bay Area band that played music from the 1920s and ’30s on traditional acoustic instruments—guitar, mandolin, fiddle—and an assortment of homemade pieces, including washtubs, washboard, kazoos, and a glass or ceramic jug. Mother McCree’s Uptown Jug Champions never released an album, but some rough recordings were dug up in the late 1990s and issued under the band’s name through Grateful Dead Records. It was a few years after that, around 2006 or ’07, that Drew Fisher heard the Mother McCree’s album.

“That was the first album that I heard that made me want to play straight-up jug-band music,” Fisher says. “I’d played bluegrass and old-time music, but when I heard that—those guys sounded like they were having a great time with that style of music. It was like, that’s what I want to do. I started researching old jug bands and Gus Cannon blew me away. You could tell from his banjo playing—he’d just make music and go crazy at it.”

Over the next few years, Fisher’s band, the Gander Mountain String Band, switched from old-timey country music to old-timey jug-band music—a minor adjustment for casual listeners, but a significant one for hardcore aficionados. The Knox County Jug Stompers come from all kinds of backgrounds—bluegrass, rock, acoustic blues, country music—but have settled on a more or less authentic reproduction of the jug music made popular throughout the South nearly a century ago by Gus Cannon and the Jug Stompers and other bands with similar names, like Clifford Hayes’ Old Southern Jug Band, the Dixieland Jug Blowers, and the Seven Gallon Jug Band.

“‘Jug bands’ is kind of a loose term,” Fisher says. “It’s like ska—there are different waves of it. The first wave was the 1920s—Gus Cannon, the Memphis Jug Band. But then they had jug bands in the ’60s that came up with the folk revival that would play those old tunes but would also play those ’20s popular songs—they’d play blues songs and mix old-time music in there, too. That’s kind of where we’ve sprung from, that folk, roots, eclectic mix of music.”

The list of songs on the Jug Stompers’ new self-titled CD covers the same kind of broad territory from a very specific time period. Some of the tracks—“Georgia Buck,” “Carve That Possum,” “Liza Jane/Shortening Bread”—are straight from the traditional repertoire, with an old blues pick (Bo Carter’s “Your Biscuits Are Plenty Big Enough for Me”) thrown in, along with the Tennessee Chocolate Drops’ Knoxville standard “State Street Rag,” written by Howard “Louie Bluie” Armstrong.

“One thing about old-time music is that it was regional,” Fisher says. “People in East Tennessee played a particular style, and not just blues and not just jug-band music, but all kinds of music. It was regional, because of the old methods of communication. To stay with tradition, we played a Howard Armstrong song—right downtown, State Street, that was the happening spot back then. …

“Being from this region, I wanted to keep the tradition alive. When people think about this region, they think about bluegrass. ‘Do you play bluegrass banjo? Do you play Earl Scruggs?’ To me, that’s commercial bullcrap. Not that I don’t like bluegrass, but the true form of music and how people played music before ever hearing a radio—people learned from hearing each other. Hearing those old fiddlers like Tommy Jarrell and Charlie Acuff and those guys, that’s how they learned to play. Those people who taught them learned from hearing people. It’s got more roots and soul to it, to me.”

Fisher wrote two songs on the new disc and co-wrote two more with guitarist Buck Hoffman. Biscuits are a common subject for him—three of Fisher’s songs are winners from the songwriting contest at the International Biscuit Festival, but biscuits also happened to be a favorite double entendre in jug-band music. (Maybe it’s not a coincidence that one of Knoxville’s most popular annual events is based on a dirty joke.)

“We didn’t put them on this album because we wanted to keep it kind of wholesome, but we’ve got a good list of the oldie innuendo tunes, like ‘Grind So Fine’ and ‘Tapping That Thing,’” Fisher says. “We’re going to make an album called Adults Only. The old blues and jug-band stuff—not what was recorded but what was played on the stret—had that ‘Keep My Skillet Good and Greasy’ kind of thing, so we have some of those, like ‘Mama Don’t Make Those Biscuits Anymore.’”

The Knox County Jug Stompers will officially celebrate the release of their new CD at Boyd’s Jig and Reel in the Old City on Saturday, Nov. 14, but the band has a full schedule of shows around the area next week: an appearance at the WDVX Blue Plate Special on Tuesday, Nov. 10, followed by a set at Wild Wing Cafe in West Knoxville the same night, and a live-broadcast performance on WFIV’s Behind the Barn series at Barley’s Taproom in Maryville on Thursday, Nov. 12.