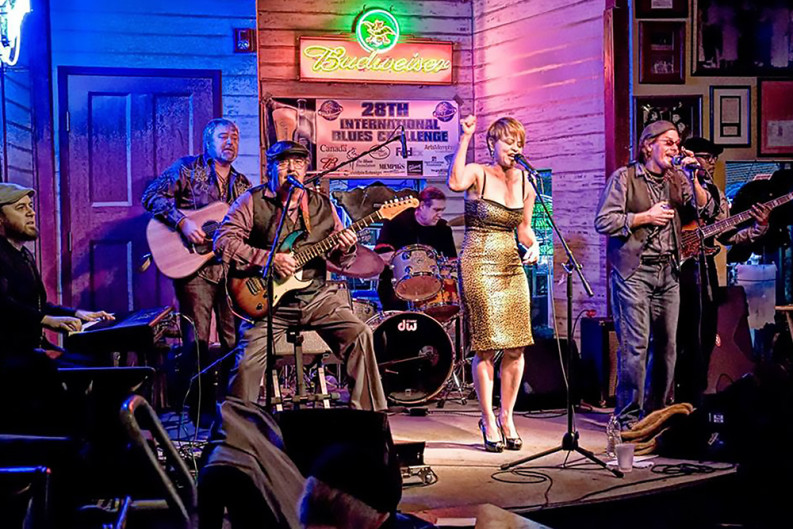 Jenna Jefferson remembers the first time she played a show at Manhattan’s in the Old City. “If they had booked me at Madison Square Garden, I couldn’t have been happier,” Jefferson says. “I’m a little country girl from Harrogate, Tenn., and to come to the big city, that was such a big deal. ‘Oh my god! I’ve hit the big time now!’”

For more than 30 years, Jefferson has been one of Knoxville’s most popular singers, first with the rock band Strange Cargo and then with a succession of blues and R&B groups—Jenna and the Joneses, the Accidentals, and, for the last several years, Jenna and Her Cool Friends, the classic old-school blues band she had dreamed of putting together (and which just won this year’s Top Blues Band in the Mercury’s Top Knox readers’ poll). But she surprised her fans in late October with a Facebook post announcing her retirement at the end of the year:

After much thoughtful consideration, I have decided to hang up my microphone as of December 31, 2015.
It has been, without a doubt, an experience full of wonderment, passion, new friendships, challenges, gratification, creativity and incredible fun.
To the musicians I have had the pleasure of playing with, I am grateful for your teachings, ability to turn a deaf ear, giving me many free reins and helping me grown as an artist. …
To my Cool Friends, I am grateful for the music, revival of my creative spirit and for reminding me music is about love, emotion, perseverance and reverence for the musicians who have gone before us.
JENNA & HER COOL FRIENDS have but a few public performances left in 2015 so I hope you will stop by for a final Big Hug!!
I hope you will continue to support my friends, Michael Crawdaddy Crawley, Ben Maney, Keith Ford, Glyn Loyd, Kevin Redding, Michael Jordan and Matt Reynolds in their ongoing projects. They are such talented musicians.
REST ASSURED!!!!!! I am happy and healthy but have obligations that I both want and need to make time for.
I am forever with you………….

Jefferson says that the emotional commitments of leading a band finally caught up with her. “After 35 years, the long hours, the travel—my gig days are 12 hours long,” she says. “And I’ve just had some friends that passed away in the last couple of years, and they were the ones saying to me, let’s go do this, Jenna, let’s go do that. And I was always the one saying I’ve got a gig scheduled. I reached a point where I don’t want to be the one saying that anymore.”

Jenna and Her Cool Friends have three final performances scheduled before Jefferson’s retirement: the WDVX-Travaganza fundraising concert at the Standard on Jackson Avenue on Friday, Nov. 20; one last set at Mulligan’s in Turkey Creek on Saturday, Nov. 28; and the Alive After Five New Year’s Eve Party at Knoxville Museum of Art on Thursday, Dec. 31.

Jefferson says the other band members—harmonica player Michael “Crawdaddy” Crawley, lead guitarist Michael Jordan, bassist Glyn Lloyd, keyboard player Ben Maney, drummer Kevin Redding, and rhythm guitarist (and Jefferson’s husband) Keith Ford—don’t have any plans to continue the Cool Friends without her. She and Ford, she says, are still writing songs together, but they don’t have any immediate plans for performing or recording. But, she adds, it’s hard for to imagine that retirement means she won’t ever play music again.

“You never know—the Cool Friends will probably get together and do some kind of a reunion show in the future,” Jefferson says. “But it won’t be a full-blown gig schedule like it’s been the last six years.”

And she sounds like she means it: “If I say I’m hanging up my microphone and don’t hang it up, I’m going to be in big trouble with a lot of people.”