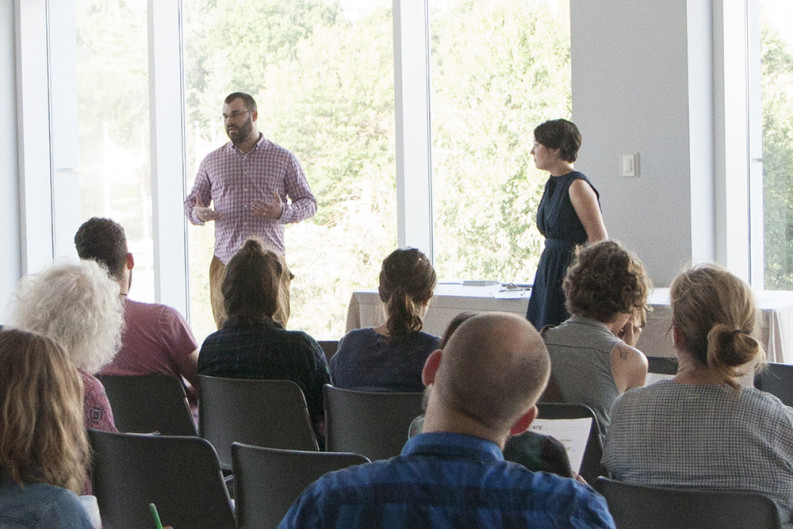 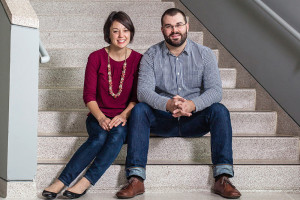 Brian and Carrie Jobe, in the Knoxville Museum of Art on Saturday, Oct. 3, 2015.

Tennessee is already known across the globe as the home of country music, the artistic expression of the Everyman. A couple of Knoxville artists want to help the state become equally renowned for a much more challenging and complex part of its cultural scene: contemporary art. They have launched a Kickstarter campaign to create a statewide, online art community and market it to visitors from other cities, states, and countries.

Carri and Brian Jobe, who met as art students at the University of Tennessee and married, are launching a nonprofit called LOCATE Arts. The group aims to establish a website with a calendar of contemporary art shows statewide and a registry of the state’s contemporary artists. It would also coordinate a simultaneous statewide “gallery night” to showcase contemporary art annually.

Carri is a painter originally from Nashville, and Brian is a sculptor from Memphis who teaches at Pellissippi State Community College and has worked for the Guggenheim Museum in New York and the Blue Star Contemporary Art Museum in San Antonio.

“We want to strengthen the dialogue between cities and also show it to the world,” says Carri Jobe in an interview on behalf of both the project founders. “That way, Tennessee gets recognition for what’s happening here, which is a lot, and it also helps us grow contemporary art scene and get us on the bigger stage.”

David Butler, executive director of the Knoxville Museum of Art, says the project could help claim a new status for the visual arts in Tennessee. “I just don’t think we’ve thought much of ourselves as a state, as a unit,” he says.

Butler says the state tourism bureau markets Tennessee culture, but with an emphasis on the state’s music brand. “I think what Brian and Carri want to do is grab some of that prestige for the visual arts,” he says. “We’re also a big visual arts state, and we’re really starting to figure out how to (market that).”

To get off the ground, LOCATE Arts launched a Kickstarter campaign last month to raise $50,000 by Nov. 9. It’s been slow going. Late last week, the campaign had raised less than $7,000—but it moved up to almost $18,800 by Tuesday. The group has held Kickstarter parties during October in Chattanooga, Memphis, and Knoxville (at the Striped Light gallery) and has another slated for Nashville on Nov. 7.

Although the LOCATE Arts Kickstarter video describes contemporary art as “art that is being made today,” the project is really using a narrower definition. The short explanation might be: You know what you think of when you think “contemporary art?” The kind of art you might see at the Guggenheim or the Museum of Modern Art in New York? That’s it.

“We would define it as art that could also be having a dialogue with other contemporary art in bigger cities or internationally,” Jobe says. It includes visual art, installation and multi-media art that pushes boundaries. In Knoxville, venues that display this kind of art include KMA, the Ewing and UT Downtown galleries, Gallery 1010, the Zach Searcy Project, Fluorescent Gallery, and Striped Light. But Jobe says she wants the online calendar to include “underground” venues, too, like garage shows and “pop-up” galleries.

The website would be modeled on a similar Texas site called glasstire.com, which the Jobes frequently used to plan trips when they lived there several years ago. After moving back to Knoxville, “We plugged into Knoxville art scene really quickly, but we have a hard time finding out what’s going on in other cities,” Jobe says.

Bryan Baker, one of the founders of the Striped Light letterpress studio and gallery, says a clearinghouse website for Tennessee art shows could help casual spectators decide when it’s worth trying a gallery they’ve never visited.

“Contemporary art by nature isn’t something that has a following already,” Baker says. “If you’re inventing a new way of making laser cookies and no one’s ever heard of it, you aren’t going to have 150 people at your first opening. So we need all the help we can get. This allows (artists) to step up and get seen more quickly.”

And that helps with sales—which, face it, are needed for artists to afford making more art (not to mention eating). “For contemporary art there isn’t that much extra funding for promotion, because people aren’t buying contemporary art in Knoxville,” Baker says.

Baker says an online art calendar could help galleries attract viewers more than once a month on First Friday. “Sometimes in Knoxville, spectatorship happens only on opening night,” he says. “LOCATE Arts might give a chance for people to come from other cities to see a show at other times.”

Often the people who attend Knoxville contemporary art shows are other artists, not buyers, Jobe says. “We see a lot of art spaces close, because they feel burned out because they’re doing a lot of work, but no one seems to be supporting them,” she says.

Contemporary art can be a hard sell in East Tennessee. In the early 2000s, KMA tried focusing on cutting-edge contemporary art, putting on some nationally significant shows. Although they were met with good reviews in The New York Times and the Washington Post, Butler says, “it didn’t really seem to resonate locally with a big enough audience.” Now KMA structures its exhibits around East Tennessee, which provides opportunities to feature both contemporary and traditional art.

Butler says cities need to develop an ecosystem to attract and support artists, including museums, galleries, experimental spaces, patrons, people who buy art, and colleges. “It takes a whole bunch of money to make a coherent scene,” he says. “I think we’re just at the really early stages of having an art market.”

Kim Bumpas, president of Visit Knoxville, says the Knoxville Convention and Visitors Bureau supports any new tool that helps visitors and residents enjoy the city. The bureau already promotes the arts and offers an online calendar that visitors use to plan their trips. But it relies on galleries to add their events, and participation can be hit and miss, Bumpas says.

A website offering First Friday listings went up for sale late last year because owner and local artist Steve Lareau got sick of trying to work with galleries that wouldn’t provide information about their shows. (Nothing has changed on the site since, so he apparently didn’t get any takers.)

Bumpas calls herself a novice when it comes to art.

“I love it when I see it, but I don’t necessarily seek it out,” she says. “I have to hear about it. That’s the only way to get people that aren’t already in the know. If you’re not part of that inner circle, you might not know some of the stuff that’s going on. How do you create the engagement part where someone thinks, ‘If I don’t put my information on there, I’m going to be left out?”

Jobe acknowledges that sometimes contemporary art seems exclusive, which is why it’s important to create an access point to help the public get more familiar and comfortable with it. “In Texas, it was a normal social thing to go to shows for people who weren’t in the art community,” she says.

LOCATE Arts is currently a sponsored project of the nonprofit Arts and Business Council of Greater Nashville, but it’s in the process of becoming its own 501(c)(3). Although based in Nashville, it won’t present the state’s various contemporary art communities as mere offshoots of the capital’s, Jobe says.

Carri acknowledges the group has no board members from Knoxville, but says she and Brian are taking nominations for more board members “to give some concrete accountability there.” (Of course, the whole thing is the brainchild of Knoxville residents.)

The Jobes also held a question-and-answer forum in each of the state’s four major cities, including one at the Knoxville Museum of Art in August.

If artists from other cities begin checking out each others’ shows and building relationships, that creates more opportunities to swap shows so Knoxville artists are seen in other cities, Baker says. That could also help reveal common characteristics in Tennessee art. For instance, Striped Light has curated a couple of shows that involved skateboarding as a common thread, with another coming up. “Is that happening in Memphis?” Baker wonders. “You could recognize cool trends that would be hard to see otherwise.”

Local artist Cynthia Tipton went to the Kickstarter party and wants to help. But she says she’s not sure the LOCATE Arts project has been planned out enough to have the impact that is envisioned.

Corrected 11/04/15: A previous version of this story used the term “modern art” interchangeably with “contemporary art,” but modern art is more specific to the post-war era through the 1970s and does not necessarily include current art works.

Update 11/11/15: LOCATE Arts squeaked in under the wire Monday, Nov. 9 to achieve its Kickstarter goal of $50,000, which will be used to fund the new non-profit supporting the Tennessee contemporary art scene. Knoxville-based founders of the project Brian and Carri Jobe were surprised, Brian Jobe says, because donations had reached only $27,000 just hours before the campaign was set to close.

“It was not a done deal,” he says. “But we knew there were a few people waiting to see how much we needed.” Jobe says the 277 donors were individuals and galleries from across the state.