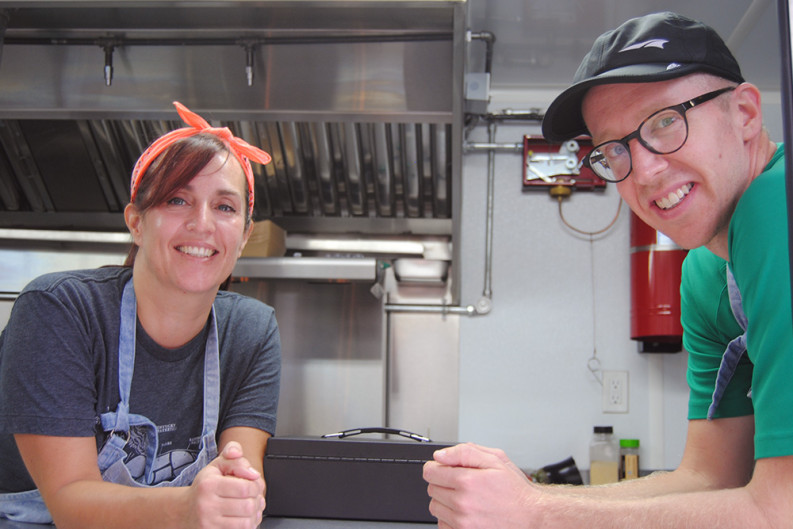 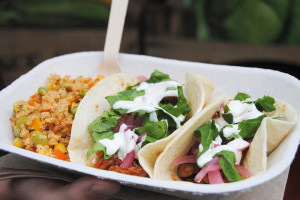 Not so many years ago, a restaurant aptly known as Veg-O-Rama came and went in Happy Holler.

Not so many months ago, a new produce and vegetarian baked goods market in South Knoxville had a grand opening and a quiet closing within months of each other.

Many local restaurants—Sunspot, the Holly Hambright enterprises, the Three Rivers Market food bar all spring to mind—do a brisk trade with the local vegetarian foodies, but as for establishments that are vegetarian all the way? Is Knoxville really ready for that?

“We wonder that every single day,” quips Whitney Ross, the co-owner with Rebecca Clayman of the Dinner Bell Fresh food truck, open since August and utterly, completely vegetarian—sometimes vegan, to boot.

He’s only half serious, and any doubts are not keeping the pair from plowing right into action.

“We have a simple mission: healthy, happy Tennessee,” he says. “We believe that healthy people are happy people and that Tennessee is a beautiful place to be enjoyed and explored. While some may feel our focus may make us an underdog, we embrace the opportunity to provide healthy options and comfort food minus the guilt.”

Ross and Clayman bring rich and diverse life experience to this truck. Clayman’s been a juice bartender and baker in other states, and honed her skills with renowned plant-based chef Chad Sarno and the Rouxbe team. Ross is a certified plant-based nutritionist who says he started working at age 12 as a shoe shiner, and has held many administrative and educational posts in between.

The two met eight years ago working at the local Apple Store, and both began a “vegan adventure” in January 2014. They share a frustration with Tennessee’s consistently poor national health rankings, and have vowed to help us do better. They’ve already met with some success at events like Barre3 in the Park at Sequoyah Hills Park and a Trunk or Treat event with the North Side YMCA. “Both of these were community focused and sponsored by organizations that encourage healthy living,” Ross says.

The food truck also does a regular gig at lunch on Main Street, parked across from the main post office, and it’s here that I start thinking that these people might just be able to pull this off. The menu is lovely, all simmery or crispy, homey or spicy, depending on your preference. 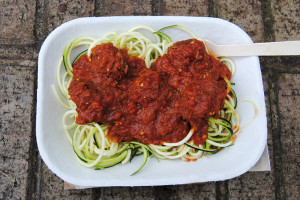 I dive into zucchini “pasta” with a lively marinara and “meatballs” made of quinoa, beans, and spices. As I realize the “noodles” are crispy and lightly flavored, not carb-y or chewy like your typical white flour pasta, I place my finger on it: These two are forging new ground. With dishes as varied as vegan nachos and eggplant curry, a quinoa bowl, and butternut squash soup, they are making stuff you’ll like to eat. They are not trying to make sprouted grains taste like your mammaw’s meatloaf, or even a vegan soup taste like a vegetarian one—their cashew-lime “cream” is smooth and tangy but not trying to take the place of sour cream.

They are just cooking good food, unapologetically vegetarian food, and you can taste Clayman’s background at play in the simmered sauces, particularly her favorite, loaded with ginger.

“The food I was exposed to as a kid was rich with flavors and spices,” she says. “My grandmother was constantly having us try new things. Empanadas, tamales, beans, rice were the comfort foods on my table when I was young.”

She greets walk-up customers by name, and one of them, a guy named Sam Rosolina who I met at a Knoxville Green Drinks Happy Hour, unwittingly gives me further hope that Dinner Bell Fresh is on the right track. He and a friend walk from the UT campus and their grad studies for lunch here regularly. What do they like? “You really can’t go wrong,” he says.

But here’s the cool thing. Rosolina seems to only remember that it is vegetarian food as an afterthought; he’s not a vegetarian. “It’s just really good,” he says.

Another fellow with a twice-pierced face and a happy grin confirms the opinion. “It just makes me feel good to eat this stuff,” he says. He was so thrilled with the choices on an earlier trip he was anxious to come back. “Remember?” he asks Clayman. “I couldn’t decide so I ended up getting four.”

A smattering of people in business suits and blue jeans completes the steady flow of customers, and Clayman and Ross, who divide all the duties, calmly banter and serve and stir and take money and feed.

Are we ready for them? I hope so.

Because there is one more way I know that these two are all-in on this enterprise, all set to be the ones who make food truck/vegetarian/Knoxville history.

It was Ross’ answer to my very first question for them: Do you have other jobs than this, other ways to support yourself?