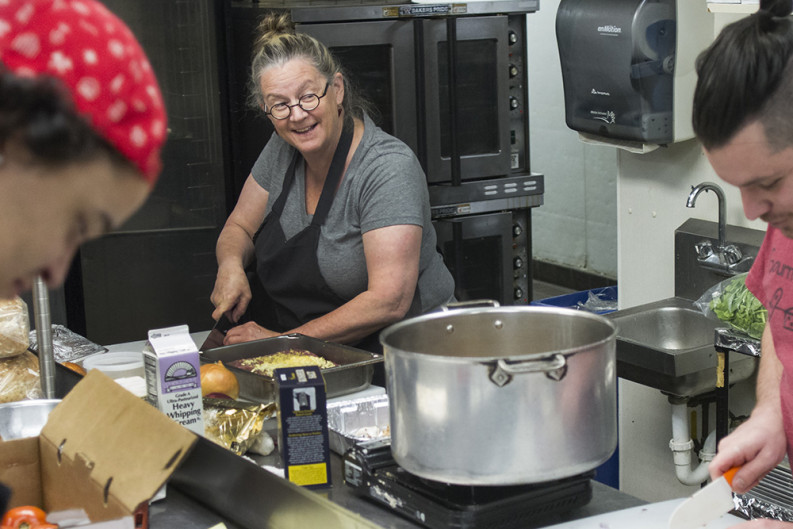 It’s only been a matter of weeks since Holly Hambright merged her wacky, pig-tailed chef logo with the staid oval that marks the longtime Bearden breakfast favorite, Gourmet’s Market. But the first alterations—only opening tucks before a larger facelift—already point to the presence of one of Knoxville’s favorite foodies, most lauded chefs, and unforgettable personalities.

The changes are yet small—there are some accent lights scattered around the cavernous dining room that soften the unforgiving glare of fluorescence in the former market space, once filled with shelves of Le Creuset’s classic enamel-lined cast iron cookware, aromatic Piedmontese truffle oil, and coarse fleur de sel. On the other side of the building, where Cosmo’s Caffe offered Knoxville some of its first tastes of sandwiches filled with Irish bacon, country pate, and Westphalian ham, Hambright has added some cozy moments that give the Caffe space a soft, pleasantly clubby feel via lower lighting and some cozy seating.

But the larger changes, as Hambright describes them, make perfect sense and seem perfectly suited to the market. The colorful red walls punctuated with playful, bright yellow images of baguettes, stars, and coffee accoutrements, will soon turn to a soothing shade of cinnamon stick. Other walls will be filled with more art, including a prominent new spot for a drawing by Knoxville’s celebrated glass artist, Richard Jolley. Hambright’s vision for the space also includes a smaller version of the market’s retail past that she says will include goodies from Magpies Cakes as well as “grab-n-go casseroles, salads, soups, and dressings, my brother’s coffee cups, our T-shirts,” she says, as well as cheeses, coffee, spice blends, and finishing salts. “We’ll market things that make sense.”

If any other chef had taken the keys to this space, the changes might feel less organic, but for Hambright this isn’t a corporate takeover—it’s a homecoming.

From 2003 to 2008, Hambright was Gourmet’s Market’s executive chef, and many items on the menu today hearken back to that time. It was a job she loved. “I enjoyed it so much here, I hated to leave,” she says. “I had so much fun on the weekends doing secret specials and developing the brunch menu.” She left in 2008 to pursue other opportunities that led directly to her return to this kitchen; along the way, she’s opened three successful restaurants and seen her catering efforts grow to a size she never imagined. But like the hero in Joseph Campbell’s description of the monomyth, her journey brings her home with the experience and wisdom to help rejuvenate this place and the community she loves.

Despite the success of her businesses and the tweaks she’s made to them over time, she’s never considered completely changing Gourmet’s Market into Holly’s Homberg, which now shares the space.

“Gourmet’s Market has a very devoted following. We’ve already had people say you can’t change the grits, you have to keep the Veg Head, etc. So we’ve decided if ain’t broke, we won’t fix it,” Hambright says. “If it’s good we’ll make it great, and if it’s worn out its welcome, we’ll send it on its way. We’ve already started specials, implemented our soup program, just subtle things like that. I don’t want to alienate lovers of Gourmet’s Market, but I also don’t want to alienate the clientele we’ve developed across the street.”

That means she’s gone back to the Cotswold cheese on the Frog in the Ditch, and inserted her own recipes for chicken salad, tuna salad, and the Cuban-style sandwich. But the “grand letterhead announcements” are waiting for First Friday, Nov. 6.

Dinner service will come after the first of the year on the weekends, Thursday, Friday, and Saturday. It will be the same style of dinner service featured at Holly’s Homberg, with a menu that changes weekly. Hambright plans to continue her regionally themed Taste Bud Tours. After recently visiting the cuisine of Montreal, she’s planning the final dinner in this year’s tour for Dec. 3 with a return to Knoxville. Next year, with the inclusion of a full liquor license, she promises to add wine pairings to the regional foods.

A less energetic person would get tired just thinking about the rapid-fire rise of Hambright’s little empire. Holly’s 135 just opened on the 100 block of Gay Street last year, and Holly’s Corner landed on North Central the year before. Her occupation of this place, which started at the first of October, has been seamless and uninterrupted, remaining open throughout the revamp.

But this chef, winner of three Top Knox categories—including Top Chef, Top New Restaurant (for 135), and Top Caterer—looks as hale, hearty, and happy as ever. The familiar Hambright twinkle glitters brightly with each of her distinctive and frequent laughs, which come in a crescendo as she shrugs off any worry about her growing to-do list, including adding a new prep shift “just to get the bacon cooked.”

Holly Hambright’s fundamental principle is the same as it always has been: “I want to make it great food, every time.”