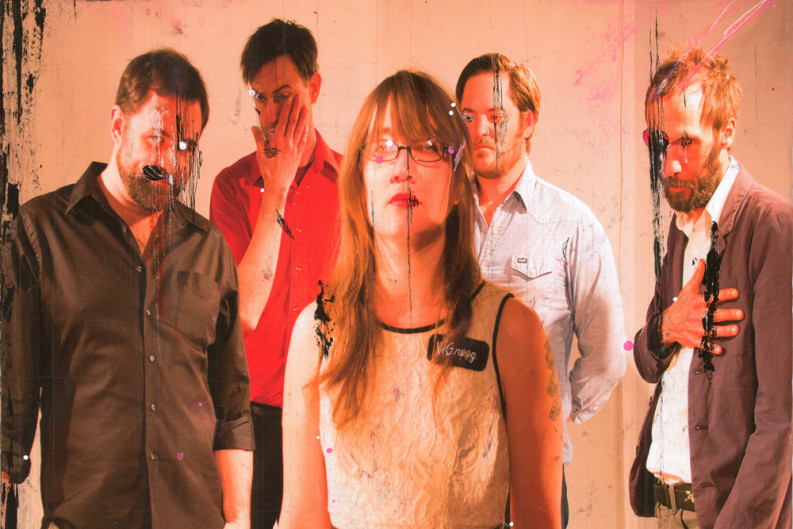 Eric Lee is fond of referring to White Gregg as a “dumb rock band.” There might be some defensiveness in the guitarist’s self-effacing statement, a way to preemptively ward off criticism from those who don’t consider rock ’n’ roll a worthy artistic pursuit and anyone who might judge his band for sounding different than most other bands.

The other members of the group—Jason Boardman on drums, Maggie Brannon on vocals, Damion Huntoon on bass, and Tyler Mucklow on guitar—convey a similarly cavalier attitude about White Gregg, manifested in the deliberately ridiculous name, their sophomoric stage banter, and a casual attitude toward band business.

So far, so typical “rock band,” but all this is worth noting because the music they make together as White Gregg sounds like it takes a lot of thought, a lot of effort, and a lot of arguing to compose and execute. A typical White Gregg song, if there is such a thing, has multiple parts and changes—lots of twists and turns. If that makes them sound proggy, it would be an abrasive post-punk prog. And it’s nowhere near neat or nerdy enough to be called math rock. Antecedents might be Captain Beefheart, U.S. Maple, This Heat, and The Flowers of Romance-era P.I.L. Not that they necessarily sound like those bands, but they seem to share with them a need to interrogate the dynamics of rock music and song form, an abhorrence for playing things straight. Live, it seems as though they set traps for themselves in much of their music, and they do often flub a part here and there. On a night when they’re hitting all the right notes, it’s about as good as rock music gets, though it may take seeing them a few times to realize some of those notes are meant to be there.

Unfortunately, you won’t get a chance to see White Gregg live anytime soon. A medical emergency this summer resulted in the amputation of the tip of Lee’s left middle finger, causing the band to go on hiatus. The last time they played together was back in June, opening for Danish punk heartthrobs Iceage in Asheville.

After the show, word got back to them that Asheville resident Don Howland, of seminal punk blues bands Gibson Bros. and Bassholes, and one of Lee’s personal heroes, had called them brilliant. Closer to home, Tim Lee recently named Eric Lee as one of his favorite guitar players in an article on Knoxville music for web magazine the Bluegrass Situation. The band was also asked by drummer Jon Colpitts, of Spiritualized and Oneida (one of Boardman’s favorite bands), to back him on two tours of his Man Forever project; a Pilot Light recording, which Colpitts called “the definitive version” of his piece, was released on cassette by a Czech label (in an edition of 70, so scoring a copy might be a problem, though you can listen to it on Bandcamp).

Fortunately, White Gregg just put out an album, Nice Spread, the second release on Boardman’s Striped Light label. (It’s available at local record stores and stripedlight.com.) Recorded in May 2012 at Scott Minor’s Wild Chorus Studio, multiple delays—including the continuing backlogs at vinyl pressing plants—kept the record from being released until now. Lee’s injury meant they couldn’t play their own release show; instead, they opted for a Sunday afternoon brunch at Pilot Light that included the premiere of a video in which the band members edited one of their songs over another local band’s video and a “bass clinic” that was really a stand-up comedy routine.

It’s somewhat surprising a record got made at all. Lee has been playing around town for more than two decades, and other than a single and a few CD-Rs and tapes, little recorded evidence of his playing exists. “For me, recording is barely part of being in a band,” Lee says. “Ninety-nine percent of it is about being in a room with people playing. The rest is empty ritual.”

Even more surprising, White Gregg had a double album worth of material they were planning to record with Steve Albini at his Electrical Audio studio before they were sidelined by Lee’s injury. He’s recently starting to play again, but there’s some uncertainty about when and if they can reschedule the recording sessions. For now, they plan on starting up practice again, but these aren’t the kind of songs you can just pick up and nail after considerable time off.

A refrain from Brannon in the band’s song “Dark Corner” probably gets to the heart of the band better than anything: “We’re never comfortable without something horrible.”