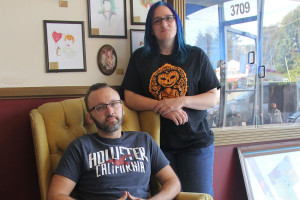 When you walk into Creature Seeker Oddities, you can’t shake the feeling that you’ve finally stumbled across one of those mythic shops that wasn’t here yesterday and won’t be here tomorrow.

The miniature, mummified centaur in the brightly lit vestibule is just the beginning. Keep going—past the cozy velvet armchair, past the glassed-in diorama of fleshy, sad-eyed creatures in colorful costumes, past the flea-market painting of an autumnal countryside that’s been altered to include UFOs, Mongolian death worms, and other classic cryptids—and you’ll reach the dark heart of the shop: a cavernous, red-walled space where a few dollars will buy you a dream (or a nightmare) of your choosing. A werewolf leers from a painting above the cash register; tentacles curl in liquid-filled spice jars; gape-mouthed worm creatures and two-headed fetuses rest in bell jars amid a clutter of other macabre props and sideshow gaffs. If you were in a movie, you’d almost certainly go home with a maniacal, man-eating plant, or perhaps a furry little critter with a strict feeding schedule and a nasty water allergy.

Nestled between Comics Exchange and Uncle Easy’s Pawn Shop on Chapman Highway, Creature Seeker Oddities is the brainchild of Knoxville-based visual artist Eric Brown. Brown has been sculpting and painting bizarre creatures and strange “relics” for more than a decade, first as a hobby and then professionally, under the moniker Creature Seeker Studios. With Creature Seeker Oddities, he finally has a physical space—besides his home workshop—to hawk his weird wares.

But after talking with Brown for a few minutes, you may get the impression that having a space to display and sell his work is only a happy byproduct of the pursuit that really drives him: He seems more interested in turning his favorite film, TV, and literary tropes into a tangible, real-world experience.

“In movies, when a little kid’s eccentric relative dies, they move into the house and they start exploring,” explains Brown. “You have your study area, where people can hang out and have a cup of coffee and there’s art on the walls, but then you walk through our big vault door that we have there, and that’s where the collections of all the creepy things and creatures are.”

Though Brown is a lifelong fan of genre movies and television shows—he cites ’50s B-movies and sci-fi programs as big influences—he’s only been making creepy art for about a decade. He experimented with various media and styles while he paid the bills as a massage therapist, but nothing really resonated, either with buyers or with Brown himself.

“I tried all sorts of things,” says the self-taught artist. “I did watercolor paintings, and then I tried lots of crafty things that I thought would be marketable, but I hated them. I didn’t sell that many, actually, until I started doing creepy stuff and it just kind of caught on.”

The real turning point came when Brown discovered a very specific sub-genre of weird art: sculptures inspired by 19th and 20th century carnival sideshows. Once Brown realized there was a market for (fake) shrunken heads and mummified mermaids, he never looked back. Even his media of choice—polymer clay and papier-mâché—make him something of a torchbearer to the likes of Homer Tate, the sculptor who created some of America’s best-known sideshow attractions.

“Back in the day, Tate was one of the first people to really make sideshow exhibits, and he did a lot of papier-mâché work,” Brown points out. “He would create things like the Fish Girl and the Devil’s Child and shrunken heads and the Birdman. Some of those are still around. We even have some old Homer Tate pieces at the Tennessee Valley Fair that are traveling around in the little freakshow tent. It’s definitely a tradition that people still love, and still collect. They like the unknown, so they’re still interested in it. It’s good to keep that alive.”

Besides Brown’s own work, Oddities will serve as a gallery space for a host of painters, sculptors, and printmakers from across North America. Brown would rather talk about his fellow sideshow artists and prop makers than his influences from the traditional art world—he mentions Salvador Dali before steering the conversation back to his contemporaries, such as Florida prop maker Mark Frierson. Both Brown and his business partner, Virginia-based computer programmer Dana Cobb, stress the importance of the weird-art community, and their dedication to making space for these often neglected artists.

“Seeing Eric’s work at a horror movie convention kind of opened up this world to me,” Cobb says. “I started seeing more and more of this art, and I wanted a place to showcase it. We’re kind of collecting the weird art that people don’t get to see, and it’s exciting.”

Time and again throughout our talk, though, Brown shifts the topic from his art itself to the experience he hopes to create around it. He has ambitious plans to blur the lines between the imaginary real estate he loves, and the brick-and-mortar gallery space where he’ll spend six days a week. He cites J.K. Rowling’s Knockturn Alley as a model for what he hopes to create: a place where the mundane world stops at the threshold and, for at least a few minutes, patrons can stroll through a realm where anything is possible. He’s even adding interactive features to the shop, such as a tiny door that will open onto a miniature fairy room, and planning themed events.

“It’s a nice escape from reality, and if you’re going to do something for a living, you might as well make it fun,” Brown reasons. “This is a fun, fascinating world, and it would be great if it existed.”

CLARIFICATION: The original version of this story inaccurately identified Dana Cobb. She is his business partner, not his financial partner.