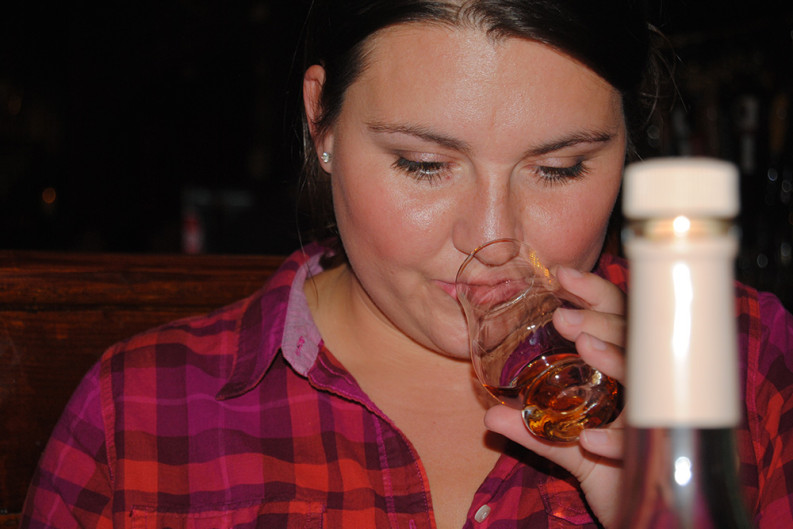 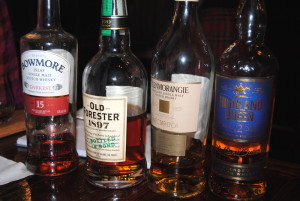 I would say Kerry Schumacher has forgotten more about whiskey than most of us will ever know, but it’s not true.

Listening to her talk about anything from how Scotland requires Scotch to be made in used casks to why bourbon is bourbon, it’s readily apparent that the Edinburgh native has not forgotten one iota of the whiskey theory she says she learned from bottles, blogs, and books—and from tasting whiskies and visiting distilleries in Scotland.

Now the woman with the dreamy Highlands accent is assisting Boyd’s Jig & Reel in the Old city in promoting its vast array of whiskies, particularly “Dram Day,” aka Thursdays from 4 p.m. to 10 p.m. when customers can sample Scotches at 50 percent off the whiskey list price, along with half-price appetizers.

She is in good company. Co-owner Randy Boyd’s fascination with all things whiskey has resulted in the bar owning more than 580 bottles—some average, some of the sort that figure on posh bucket lists. And J&R barkeep Nathan Johnson knows lots about most of them.

Nathan estimates that even in the throes of a diminishing supply of aged labels worldwide, Jig & Reel is receiving two to three new bottles every Friday, “and Randy can pretty much get whatever he wants.”

But Boyd is a sharer by nature, hence the Dram Day idea, intended to help whiskey lovers expand their knowledge and take some risks without breaking the bank.

Schumacher is a sharing type, too, and kindly led me and two Mercury friends through a swell tasting of four varieties she selected herself, one bourbon and three Scotches (one of them a blend).

She was generous with her knowledge, kindly with my more naive questions, and most importantly, had a great technique. These are the five steps we followed:

1. The Glass: We sampled from tulip-style whiskey glasses that Boyd had delivered for the bar’s use in cases, from Scotland. The shape allows a swirl of the liquid and also concentrates the scent in the narrowed lip at the top.

2. The Pre-taste: We swirl the glass to observe the “body” of the whiskey, our eyes preparing our taste buds—for example, a leisurely swirling liquid might make us imagine the contents to be a bit sweeter. Then we hold the lip of the glass right up to our noses with our mouths open—this is not considered rude at all—and breathe in so that the “aroma pushes right up into your nose.”

3. The Swish: We take a big mouthful of the whiskey without swallowing, and then swish it around to all parts of our mouths. “You want it to touch all of your taste buds—the bitter, the salty, the sweet.” Then we do swallow, noting the burn or the smoothness, the smoky sensation or the kick.

4. The Water: For a second taste, we hold a finger over one end of a straw in a glass of ice water, and then daub just a few drops of water into the glass, just to “open the flavor up, maybe take away some of the alcohol burn.” Swish again, taste again, note again. “But always be careful with the water. It’s dangerous. You may use too much and cause the Scotch to start to lose its essence.”

There are plenty of other steps to this warm, hospitable afternoon of tasting, but those are the basics. Schumacher lets us know that this ritual is not even meant to be the same for everyone. “Just because I taste frangipani or marzipan notes doesn’t mean you will.”

You are meant to strike your own style, develop your own preferences, keep track of them, allow them to expand. For my part, just in this one session, I moved even further into liking bourbon and Scotch with absolutely no H2O (before I had at least added ice). I liked the smoky taste of one Scotch and the floral taste of the other so well I didn’t want to change a thing.

Scotch or whiskey these days is no longer about “your grandpa drinking it alone in a pub,” she tells us. “It’s more about the personal experience, the personal stories that come up, the memories.”

Schumacher’s preference is for the Scotches aged in wine casks, which impart some of the previous occupant’s flavor, and she says since she’s had two babies she’s developed more of a taste for sweet takes on whiskey.

She prefers neat, too—no need for ice, which can concentrate the flavor in an undesirable way. But one mixed drink she loves, especially in these fall months, is a take on a Spanish cafe con miel, which she makes with honey, whiskey, espresso, steamed vanilla milk, and cinnamon.