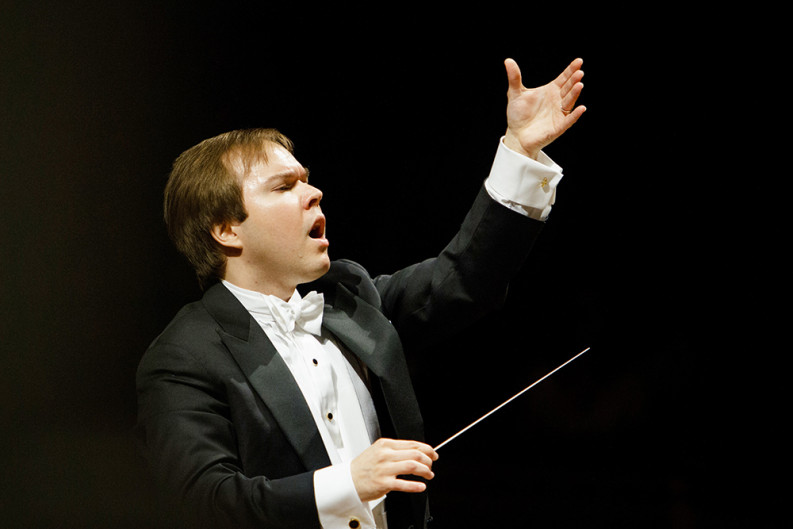 And so it begins. The search for the Knoxville Symphony Orchestra’s new music director and conductor entered a final stage last weekend with the first of six Masterworks concert pairs to be conducted by the candidate finalists. This first candidate was Marcelo Lehninger, a 36-year-old native of Brazil, who until last May had been associate conductor of the Boston Symphony Orchestra, a position he had held since 2010.

As part of the process, each of the six candidates selected his own program. Lehninger’s picks—early 20th-century works by Shostakovich, Ravel, Debussy, and Respighi—indicated his skill in constructing programs that are focused, thematic, and entertaining without being repetitious.

Lehninger also revealed his willingness—perhaps even eagerness—to depart from the conventional concert sequence—overture, concerto, symphony—by opening with the Shostakovich Symphony No. 1 in F Major, a work that itself twists convention a bit. The symphony, the composer’s graduation exercise from the Leningrad Conservatory at the age of 19, shows remarkable inventiveness and imagination in both structure and in assured writing for exposed solo instruments. It was in those exposed moments, underlined by Lehninger’s beautifully chiseled balance, that practically every KSO principal had an eloquent or audacious phrase or two to contribute.

The second half of the program opened with Maurice Ravel’s Tzigane, a work originally written for violin and piano, but later orchestrated as a Concert Rhapsody for Violin and Orchestra. In a move both logical and smart, Lehninger chose KSO concertmaster Gabriel Lefkowitz as his soloist, knowing full well Lefkowitz’s ability to captivate audiences with technique and musicality.

The first half of the piece is an extended violin solo, cadenza-like, that then sets up an energetic and colorful journey through gypsy-esque passages. The beauty of this piece is its seemingly brash, reckless abandon, but with judiciously applied brakes. Friday evening’s audience, relieved at having arrived at the conclusion without bodily harm, showed their own abandon with a substantial ovation for Lefkowitz and Lehninger.

Yet another showcase for the KSO players was the featured work of the evening, Ottorino Respighi’s orchestral tone poem, Pines of Rome. While calling this work a showpiece is an understatement, the dazzling orchestration also demands that the conductor become a textural storyteller. Lehninger wove the instrumental colors in and out, allowing dynamics and punctuation to keep the tonal variety fresh.

The closing section, “Pines of the Appian Way,” was powerful, with extra trumpets and trombones positioned at the left and right of the Tennessee Theatre balcony. Although I was expecting, and listening for, the theater’s Mighty Wurlitzer (the score calls for pipe organ) to be used in that finale section, I never heard even a hint.

Although Lehninger was only the first of six KSO music director candidates appearing this season, he made a strong case for himself with his particular strengths: a crisp directorial technique, communicative body language, an impressive and entertaining interpretative grasp of the works on his program, and a warm and friendly stage persona. Stay tuned for chapter two of the conductor search saga next month.