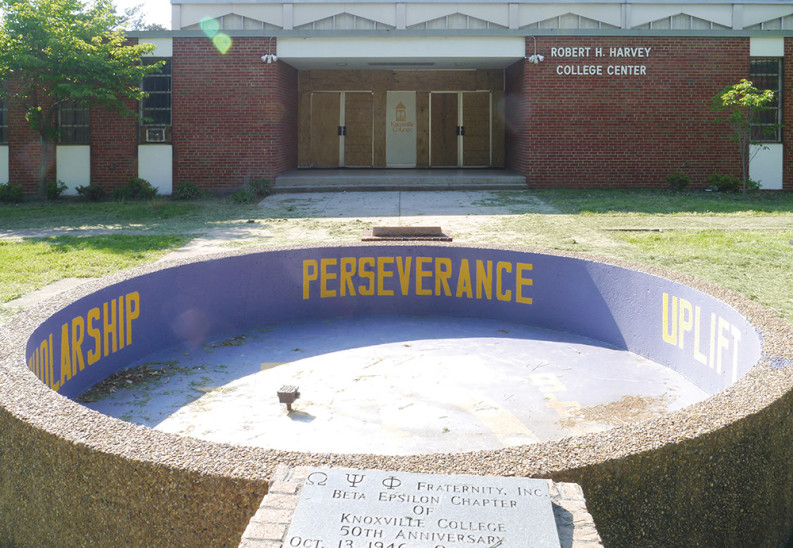 Although the Knoxville College board of trustees met Friday expecting to approve a redevelopment plan for the college’s 39-acre campus, it has delayed its decision until after Nov. 28. That’s when three unnamed developers will be submitting the final details of their proposals, says board chairman Rev. James Reese.

Officials with the historically-black college were close to a quiet deal this spring with Knoxville developer Southeast Commercial about turning all or part of the campus into something else—although exactly what was unclear. At about the same time, trustees voted to suspend classes until they could raise enough money for the crumbling college to operate.

Enrollment at the 140-year-old college had dwindled to fewer than a dozen, it was $6 million in debt, the college had lost its accreditation, and its buildings were being condemned. Although Knoxville College was placed on “provisional” status by the Tennessee Higher Education Commission this spring, college officials have said they hope to enroll students again in 2016. There was both a celebratory and mournful air at the college’s homecoming this weekend, as some alumni wondered whether it might be the last.

The Knoxville College board, trying to find a way for the college to recover, was receptive to the Southeast Commercial proposal. But when it was leaked, some locals met the secretive deal with skepticism and the board decided to slow down. They voted to create an advisory committee including local development and real estate professionals to take a broader look at options for the campus, Board chairman James Reese explained at the time.

This committee was to be appointed and led by Leonard Adams, vice-chair of the board and an Atlanta developer himself. Adams has not responded to numerous requests over the last several months for a list of the committee members. Reese says there are seven of them, but he does not know who they are. Adams is in charge of a four-member board committee dealing with the campus and was a key player in talks with Southeast Commercial.

Reese says that after appointing the advisory committee, the college approached 12 to 14 development groups to ask if they’d like to submit redevelopment proposals. Reese says that number “has been narrowed to three,” although he would not say whether Southeast Commercial was among them. He says the developers have asked that their names not be shared. He wasn’t sure whether more than three responded.

Reese says not all the groups are local, but at least one is. As far as he knows, the college did not publish a public request for proposals online or in a newspaper.

Mechanicsville residents Bentley Marlow and his partner Scott Sherrill found out last spring about the impending Southeast Commercial deal and asked the Knoxville College board for time to put together their own proposal, but were given just eight days. They were interested in turning part of the campus into a large mixed-use development with a residential or hotel component as well as a music venue. Marlow says he and Sherrill have not heard any more from the college and have focused their efforts elsewhere.

“Mechanicsville and Knoxville deserves better than a shoddy deal undertaken by shysters and charlatans,” Marlow wrote in an email last week. “We might be maverick developers without pedigree,” he argued, but he says he and his partner were well-equipped for the job by their advanced degrees, capital, and “our love and zeal for the most underrated, underrepresented, most disregarded neighborhood in town.”

Southeast Commercial president Gary Smith did not return a call last week inquiring about whether the company, whose local projects include the downtown YMCA, the Hilton, and the Marriott, remains interested in the project.

Southeast Commercial originally proposed a deal in March that would have given it exclusive “master developer” rights even before it decided what it wanted to put on the former campus. (As originally envisioned, Southeast Commercial would have provided those specifics in September if the college signed the memorandum of understanding in April.) The proposed agreement did not appear to include any payments to the college for these development rights. It was unclear whether the deal excluded the century-old buildings that are designated a National Historic District.

Reese says he hopes the board will be able to choose a partner by the end of the year to redevelop the college property.