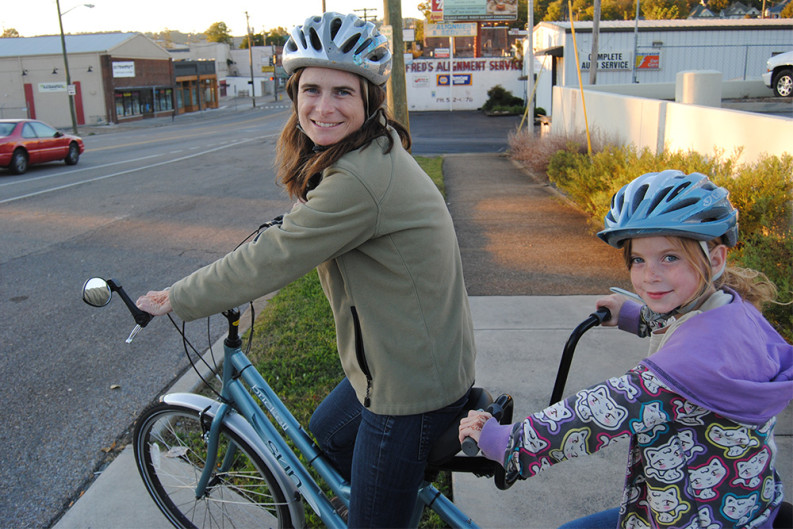 Kelley Segars (pictured here with daughter Lily) is a principal planner with the Metropolitan Planning Commission and lead organizer of the Open Streets event hosted by Bike Walk Knoxville from 1-4 p.m. Sunday, Oct. 25. For those hours, Central Street between the Old City and Happy Holler (from the Crown & Goose to the Original Freezo) will be closed so people can enjoy the streets for walking, bicycling, dancing and other activities. Cars will be able to cross Central at four intersections: Baxter, Broadway, 5th, and Magnolia.

Will you be participating in the festivities?
I have found someone to be the site contact, so hopefully I can just enjoy it! My 7-year-old daughter and I hope to participate as much as possible. She will want to ride her own bike because she knows how now, but we  have this tandem that is just so cool we’ll have to do that, too.

What are you looking forward to most?
I kind of wish it would be longer than three hours because I’m really worried we won’t be able to get to everything. But the Appalachian Mountain Bike Club is doing something on the block of the White Lily building. They always do just incredible work, so I just want to see what they come up with. And Magpies is having a cakewalk and a cupcake race, which will be like an egg and spoon race only with cupcakes.

Do you expect a lot of hula hoopers?
Yes—almost 2,000 have responded on Facebook saying they’ll be here, and I think a lot of the “yeses” are families, so we should have lots of bikes and hula hoops. There will also be yoga, tai chi, free arts and crafts, a laser obstacle course, pickleball—every kind of imaginable way to enjoy the closed-off streets.

What is this bike rodeo that’s planned?
It’s a skills course, where bikers can see how well they can do with turning, riding straight lines, controlling their bikes.

Might this lead to more events like this?
I think it definitely will. The excitement is just overwhelming, and based on the Facebook responses I am calculating around 8,000-9,000 attendees.

Are there practical details people should be aware of?
We will have porta-potties along the route. Dogs are welcome, if they are friendly and on leashes. There will be some bikes for rent along the route and some free bus passes for rides home. There is lots of free parking,  and detailed directions on how to get here from other areas of Knoxville are all on the website. There’s not much you need to bring. There will be food available from food trucks and restaurants along the corridor, and they are the only thing that costs money unless you see something you just have to have at one of the stores like Raven Records and Rarities.

What is the goal here?
Open Streets Knoxville is part of the global Open Streets Project. They seek innovative ways for cities to achieve environmental, social, economic, and public health goals. Part of it is a broader effort to encourage regular physical activity in the community and build support for more and safer transportation choices. Also, we are focused on promoting local businesses along and close to the corridor. Knoxville Regional Transportation Planning Organization and the city of Knoxville are two of the biggest supporters, and Three Rivers Market, AMBC, Old North Knoxville, and the Knoxville Track Club are sponsors. The feeling is that we need to turn our streets into places our kids feel safe being; into places, not just places where people driving cars go by.

Have you been working on this a long time?
We’ve been considering it for years, eight years maybe. But I am very pragmatic and I knew how many resources it would take and it just seemed daunting. Then Gil Penalosa, who was once the commissioner of parks in Bogotá, Colombia, and is now a consultant, came here in April as the keynote speaker for the Tennessee Bike Summit. He got everyone—including Mayor Rogero—excited about a similar concept, CicLAvia, the street closing in Bogotá. BikeWalk Knoxville really pushed for it to happen and the mayor opened the path. But we didn’t get the green light until July, so it happened really, really fast. When we went to an Open Street summit in Atlanta, we learned that a normal time to plan a new event is at least a year. We’ve done it in three months.